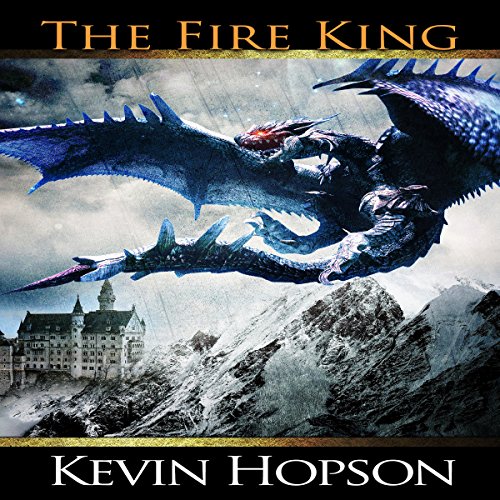 The planet Oabrora faces a perpetual winter after a human mage, Vico, causes all of the volcanos in the dragon homeland of Jifihx to erupt. Three dragon siblings (Mianth, Tulvir, and Hirador) survive the blast and set out on a journey to bring Vico to justice. However, when they cross paths with two humans, they discover a far worse enemy than Vico.

I really liked this book. The story was based on a dragon's point of view. The narrator did a great job with the various characters voices which made following who was speaking. I look forward to the next book in the series.

Magic has been used to cause all the worlds volcano's to erupt, ash blocks the sky and as a side effect the undead have risen but not just any undead, no it's undead dragon's who have risen. Talk about a challenge.

Now many people want to get revenge on the one responsible while they struggle to find food, escape predators and stay alive.

With more twists than a racetrack this story is intriguing from beginning to end and I'd love a book 2 to see what happens next.

The narrator did a good job of conveying emotion, creating tension and making the story flow. The character voices were good with the main characters voices recognizable.

I was voluntarily provided this free review copy audiobook by author, and found it very entertaining. You can go wrong with a dragon book, especially when the dragons are the heroes. This fast paced tale has multiple dragons trying to fix the planet after human wars have destroyed it. It was a great time killer as I traveled. I will be checking out other books by this author.

It has potential to be a good book but I think it was to short for such a story. The author did a good job bring it to the points needed but a whole lot of details I think could be added.

I do like how the author created the multiple class/ color of the dragon and the magic they do. Even had some undead in the story.

I think I would have enjoyed the book a bit more with a different narrator. I did make t think the voices went well with the characters he was trying to build on. I am an narrator snob and will listen to some books that I have no interest in just for the narrator, so it may be that I am too rough on him.

All in all do the sample. If the narrator is OK to you then worth the listen.

Would you listen to The Fire King again? Why?

Probably yes. It's a short listen and quite a good adventure with dragons as the main characters and humans as the villains... It's also intriguing enough to engage the listener, even though I'd like to have some more world-building or a little bit more background information of what happened to the world before the book starts...

The main characters - the dragon siblings Mianth, Tulvir and Hirador. They are very human in their behaviour, so much so that their personalities make the listener/reader forget they are dragons, except in a few action-packed scenes of fights/battles... Compared to them the human characters in the story are definitely less interesting, less developed, we don't know enough of them to really care what happens to them - that's the weakness of the story, and that's why I've given it only 4 stars.
Also, the first part (the book consists of two parts) was dragging a little, although there was a good twist ending it; the second part was a little bit more logical. Still I found some scenes unnecessary or confusing as to their purpose for the plotline, one scene particularly so (no details for the "no spoilers" reason:))...
But on the whole the storyline is interesting and the pace is quite fast, with some good descriptions of dragons fighting their enemies. And I think young(er) readers/listeners will like the book a lot more than (older) grown-ups, though:)

What does Terry Jenkins bring to the story that you wouldn’t experience if you just read the book?

Terry Jenkins' narration is good, I liked the voices he gave all the characters, especially the dwarf (sorry, no name here as I only listened to the book and have no idea how to spell his name:)). I've given the performance 4 stars instead of 5 because at times the narration seemed a little flat (for the lack of a better word...) - Mr Jenkins is great at reading dialogues, but a little monotonous when reading the narrator's parts...
On the other hand, I loved Mr Jenkins' interpretation of all the male characters; each one of them was perfect and each "voice" excellently conveyed the personality of the given character. Female characters were also well done, though it's always more difficult to voice well the characters of the opposite sex:)

As it is a rather short audiobook (a little less than 3 hrs) it can easily be listened to in one sitting; it's also interesting enough to make you want to do it without taking breaks:)

DISCLAIMER: I was voluntarily provided this review copy audiobook at no charge by the author, publisher and/or narrator.

Review of The Fire King

“This audiobook was given by the author, narrator, or publisher at no cost in exchange for an unbiased review via Audiobook Boom.”
If you enjoy 2-3 hour long books, this will be an enjoyable listen. A short story set in the fantasy of dragons, dwarfs and magicians. Action and adventure with a good ending.

Would you listen to The Fire King again? Why?

Yes, Terry Jenkins was brilliant in conveying the characters.

It's a toss up, the Dragons are at the top of the list. Conversations between the three are never dull.

Which character – as performed by Terry Jenkins – was your favorite?

I can't pick just one, Terry just did such a great job.

There were many moments that made my heart race.... but i'm not telling what they were. You need to listen for yourself.

I was voluntarily provided this review copy audiobook at no charge by the author, publisher and/or narrator for an honest review.

A good YA fantasy story

With the opening line of "I say we kill every human left" Kevin Hopson opens up The Fire King with a kick and goes from there.

The story follows three dragon siblings, as they journey through a post-apocalyptic realm (someone has caused a lot of volcanoes to erupt, blanketing the area and causing an unnatural winter), to find the perpetrator and get revenge. The dragons, against their better judgement, befriend a couple of teenage humans who help them on their quest.

The story moves very quickly from one point to another, possibly too quickly, with little description of events and actions. Much of the story is told in discussion between the characters, which enables Hopson to use best the limited space of the book to give each character clear personalities and preferences. The dynamics between the characters (especially the dragon siblings) was well done and made them feel realistic.

At under three hours The Fire King is a quick read, but it is enjoyable and it is never dull.

Terry Jenkins starts a bit rough but gets into it as the book proceeds. Initially he is a bit shaking, not providing a proper flow and having some awkward pauses mid sentence (I assume at the end of lines or pages), but this eventually disappears. Jenkins provides a variety of character voices, enabling the listener to keep the individual characters clear and distinct. He also acts out the parts, imbibing them with the required emotions and characteristics. Overall an enjoyable listen, once it got moving.

This was a YA story about two humans, dragons and magic. The story was well developed and even though I don't normally read YA books this one held my interest to the end. I got this book via audiobook boom.

I'm finding the authors geared toward our younger generation are written better than adult fantasy books. The plots are clear and consistent. The characters are defined and the villains are, well, villains the reader despise and cheer wen they 'get what's coming to them'.

The book opens up and the reader clearly, immediately, emphatically sympathizes with the dragons.

The story begs to be completely quickly. The story flows and makes it completely possible!

This was my first book by this author and narrator. They complemented one another well, it seems, and I hope they partner up together again in the future!
Or better yet, maybe Mr Hopson will try his hand for an older audience on a more epic level!

Dragons and Magic in an exciting story.

Story
This is a very interesting story and a world full of strange creatures, magic, dragons, and history. I would like to hear more about this world and its past. When there is action it is fast paced and engaging and there are no dull moments. I would happily listen to another story written by Kevin Hopson

Characters
The dragons and other characters are well written each with different personalities, motivations and have been granted unique voices by the narrator. I wanted more times to get to know them and to see how they develop over time. It feels as if you could just have the characters going about normal life and their interactions and well-written dialogue would be enough to keep you listing.

Narration
Terry Jenkins narration is at its best when performing the voices for all the different characters, these are very well done indeed. The narration of the story and events is not quite up to the same quality as the dialog but is still good. I would happily listen to another book narrated by this narrator.

Audio quality
I good and I noticed no problems at all.

Overall
I very much enjoyed my time listening to this book and would recommend it. The only problem with this book is it is too short reaching the end just when you want to know what happens next.