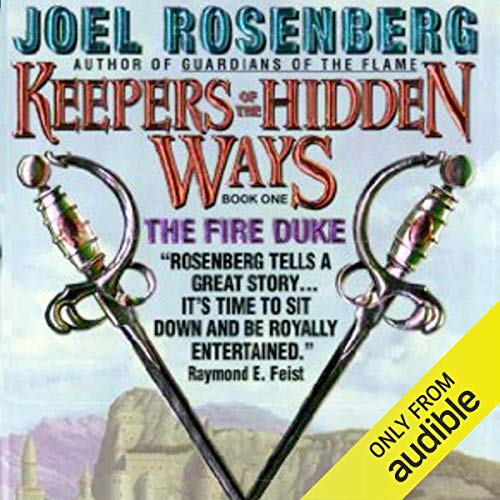 By: Joel Rosenberg
Narrated by: Sean Crisden
Try for $0.00

When strange wolf-like creatures kidnap his girlfriend and his mother, Torrie and his friend Ian Silverstein join Torrie’s father, Thorsen, and the mysterious "Uncle Hosea" on a rescue mission via a passageway to the exotic world from which Hosea and Thorsen had fled two decades earlier. Once entering the world of The Hidden Ways, they must battle gods, monsters and men, including the sinister Fire Duke, who seeks ultimate power and control of magical gems that can destroy the universe.

Intrigue, swordplay and courage all loom large in this first novel of The Keeper of the Hidden Ways trilogy by best-selling author Joel Rosenberg, called by Mike Resnick "a major star in the fantasy firmament".

What listeners say about The Fire Duke

A fun read. You will love it. I can't wait to read the next book.

I like the series. Bought them hardbound when they came out. I couldn't get past the narrator's voice or his reading manner. I don't know why, but I turned the book off shortly after starting it!