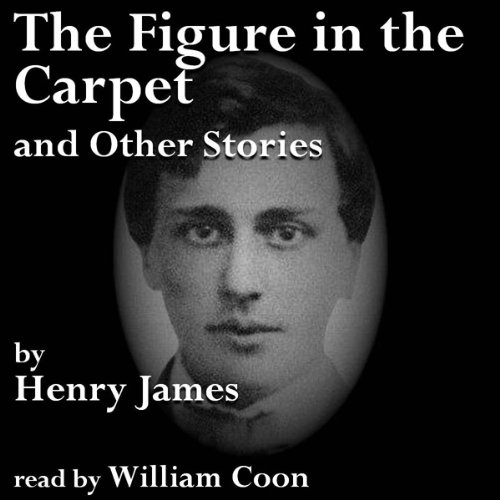 The Figure in the Carpet and Other Stories

By: Henry James
Narrated by: William Coon
Try for $0.00

Mystery stories - not exactly the genre you'd typically associate with Henry James. The three stories in this collection, however, explore the mysteries of the human psyche and the human heart.

"A Light Man" is a surprisingly modern story that examines the relationships between three men, one old and very rich, two young and very poor.

After returning from a prolonged period in Europe, Maximus Austin joins his friend Theodore Lisle at the luxurious estate of Frederick Sloane, who has hired Theodore as his secretary. It quickly becomes clear that Sloane's affections are fickle and that his fortune is up for grabs. But what exactly are the motivations of the two young men? Is one of them really more virtuous than the other? Henry James keeps us guessing, right up to the end of the story.

"The Madonna of the Future" asks: What does it mean to be an artist? In this classic tale, a young American tourist meets an odd character in Florence. Mr. Theobald clearly knows art, and he claims to be an artist, but no one has seen his work. As Mr. Theobald begins to reveal more and more of his life to his new friend, the mystery only deepens. He claims to have worked for years on his life's masterpiece, a modern version of the Madonna and Child. But what's really going on? Why won't he show the results of his labors? Is the true artist obligated to hide his art until it's reached the heights of perfection? Or should he make it available for others to judge? This story explores these questions as only Henry James can.

In "The Figure in the Carpet", author Hugh Vereker momentarily drops his guard and tells a young literary critic that his works contain a common theme, which no one has yet to uncover. But once you see it, like a figure in a Persian carpet, you can’t not see it. This revelation becomes a defining event in the lives of the unnamed narrator and his two friends….

I wish that Audible.com would stop selling public domain recordings with amateur speakers, which are available for free on Librivox.com

Annoying at many levels.

First annoyance was the narrator. The nasal voice and the monotonous tone.
Second annoyance was the affectation of the text peppered with French words.
And third is combination of 1 and 2: the narrator cannot pronounce French to save his life. I am French and I couldn’t always recognize the words.
Truth be told I may not be “connoisseur” enough to appreciate James. I am a mere “amateur”. ;)
I kind of like his Modern Madonna though.

The reader has no idea how to read aloud, and continuously mispronounces, badly, the snippets of French in the text. Execrable. Avoid.

Would you be willing to try another one of William Coon’s performances?

Should withdraw this from sale. It's of such poor quality.

The stories are a pleasure as always, the forced accents are a bit of a nuisance.