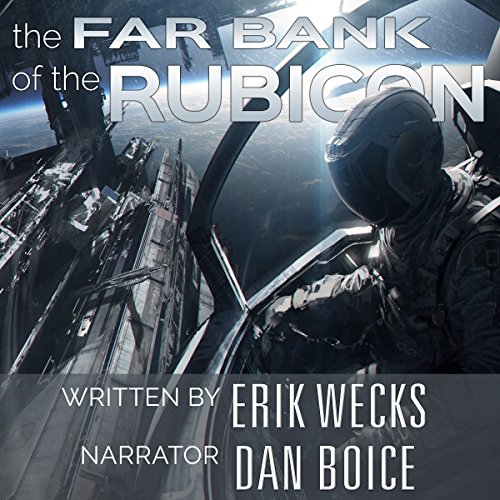 The Far Bank of the Rubicon

For three hundred years, the Pax Imperium secured peace throughout the galaxy. Now the empire teeters on the brink of collapse.

As war brews, the House of Athena expects Jonas to enlist. Unable to escape his gilded cage, the young prince accepts his fate. But when the factions come to blows, his secret affair with the daughter of a rival becomes a liability. As territory falls, Athena lays impossible demands on Jonas, and he is forced to choose between love and the ideals his family fights to preserve.

The Far Bank of the Rubicon is super-charged, adult science fiction from Erik Wecks, creator of the Pax Imperium and author of the critically acclaimed Aetna Adrift.

What listeners say about The Far Bank of the Rubicon

I was very unsure about this recently added series. There were few, if any, reviews, and it sounds a little adrift from the books I usually like. However, I was pleasantly surprised by the story, finding that although different, I actually liked the universe Erik Wecks created.

The story takes place in a future galactic society where two opposing societies control almost all of known space. One side (the more-or-less "good guys" in the story) is controlled by a hereditary monarchy type system, with a few families (and one in-particular) controlling their portion of space. The opposing side is corporate controlled government, with a CEO in overall control of the rest of human worlds. Neither side seems to have any real democratic aspects.
I won't lie... I did find several aspects of the Imperium to be a bit confusing, especially in the beginning. However, I picked up on most of it throughout the book, and it didn't take away from the rest of the story.

In the beginning of the book, the monarchy-controlled side (House of Athena) discovers that the corporate controlled worlds have been building up military forces and assembling weapons of mass destruction, and are likely planning to go to war and break the centuries-long uneasy peace that has existed in the Pax Imperium. The first half of the book is spent in the years leading up to the war, with the second half taking place during the years-long conflict.

The book follows a few characters, but focuses on the main character who is only a young boy when the book begins. He is the prince of the House of Athena, and the story follows him through his military training that begins once the military buildup begins.

The storyline has a good mix of politics, espionage, personal relationships, military scenes, space battles, and other action scenes. I grew to like several of the characters and almost all felt completely believable to me.

When I finished, I found myself anxious and ready to pick up where the story left off. Hopefully, we will see the next book in this series soon. If not, I liked it enough to buy the print version.

Good story but I have been waiting for book 2 for a couple years now....

What made the experience of listening to The Far Bank of the Rubicon the most enjoyable?

well worth a credit . has a decent ending but could use a sequel

A coming of age book that includes intense space battles and high tech cloak and dagger. Unfortunately for me, the storyline also includes first love. I did enjoy that she broke his nose during their first argument.

This is a series, but uncertain that I am motivated enough to continue.