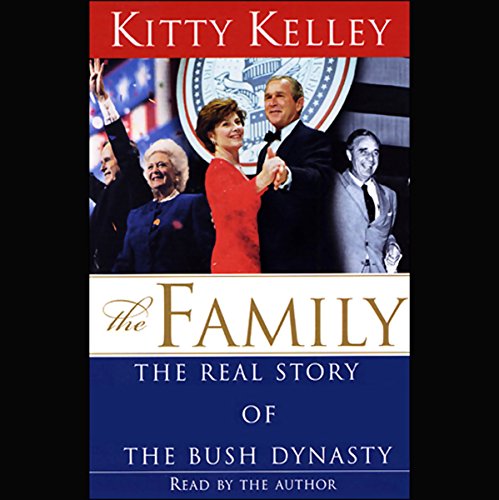 By: Kitty Kelley
Narrated by: Susan Denaker
Try for $0.00

They have wielded enormous financial power and dominated world politics for more than half a century. They have been appointed to positions of great power and have been elected as governors, congressmen, senators and presidents. They have shaped our past and, with our country at war under the leadership of their number one son, they are, more critically than ever, shaping our future.

As the Bush family has risen to dominance, so too they have been master orchestrators of their own public image, acting and operating under the shield of privacy their money and status have always afforded them. Until now.

Number one best-selling author and investigative biographer Kitty Kelley has closely examined the lives of Jacqueline Onassis, Nancy Reagan, Frank Sinatra, and the British Royal family. Now the First Lady of unauthorized biography reckons with the first family of the United States - and the result is at once a rich and shocking history and a very human portrait of the world’s most powerful dynasty.

An important work on wealth, power, and class in America, The Family is rich in texture, probing in its psychological insight, revealing in its political and financial detail, and stunning in the patterns that emerge and expose the Bush dynasty as it has never before been exposed. Ms. Kelley takes us back to the origins of the family fortune in the Ohio steel industry at the turn of the last century, through the oil deals and international business associations that have maintained and increased their wealth over the past hundred years. The book leads us through Prescott Bush’s first entrée into government at the state level in 1950s’ Connecticut, to George Herbert Walker Bush’s long and winding road to the White House, to his son’s quick sweep into the same office. Along the way, we see the complex relationships the Bushes have had with the giants of the century - Eisenhower, Nixon, Joseph McCarthy, Kissinger, Reagan, Clinton - as well as the often ruthless methods used to realize their goals.

Perhaps most impressive - and surprising - is the way the book delves behind the obsessively protected public image into the family’s intimate private lives: the matriarchs, the mistresses, the marriages, the divorces, the jealousies, the hypocrisies, the golden children, and the black sheep.

At a crucial point in American history, Kitty Kelley is the one person to finally tell all about the family that has, perhaps more than any other, defined our role in the modern world. This is the book the Bushes don’t want you to hear. This is The Family.

What listeners say about The Family

Kitty Kelley's book is a chatty, trash talking look at the Bush family. It discusses George Prescott Bush who was a senator in the last half of the 50's and first part of the 60's. He was the father of George HW Bush and therefore the grandfather of the GW Bush. She points out that the family has a long history with Yale and the Skull and Bones Club; that Prescott and HW were pretty good students and that W was not -- and that W only got in because of his family legacy. She discusses the fact that the Bushes present themselves as a self made family, but that each generation has stood on the shoulders of the previous generation to get to the top. She points out some rumors, but tells you they are rumors. And the main point is that despite the public presentation, the family has some major cracks -- (and crack pots). One of the most interesting things she said was how difficult it was to get information on the Bushes; Apparently, its easier to find out stuff on the Royals than a family whose patriarch was head of the CIA. I enjoyed it; but I like peeking around the curtain to see who is working the machines. She got a little rough with Barbara Bush, but even with that, I felt that Ms. Kelley admired Mrs. Bush. If you are a big fan of the Bush family, you will think it scandalous; if you are not, you can enjoy it as a guilty pleasure.

Excellent and well balanced! I find that Ms. Kelly has been careful to research and verify her material and appears to have done a very good job of reporting. Where the record is not clear, she appears to give both sides of the issue and is not afraid to state that there are questions on a particular point. I find the book to be insightful and feel I have gained in my understanding of the Bush family. I recommend this book to both those who support and those who oppose the Bushes.

Fun, if not gospel

Well, in reviewing this book I'm really torn. On one hand I think that Kitty Kelly is, as always, superbly entertaining, and I think she's probably fairly accurate in her reporting. However, the number of anonymous sources and near-gossip makes this book fall short of something that will be able to convince most "fence-sitters". It's a pity, because much of what she writes about is very convincing, wildly entertaining, and doutbless to the chagrin of the bushes, very embarressing.

First Audiobook that I just could not finish.

I have been getting 2 audio books per month for about a year and a half now and in that time, this would be the FIRST book that I just could not finish I even finished. I really gave this one a fair shot. Listened for about 7 hours and now all I want is that part of my life back. I have not had any prior experience with Kitty Kelly's writings but I can be quite certain I will not waste a book credit on her work again. Very one sided and worse than that...it was mind-numbingly boring! I could really care less that $180,000 in 1908 now equals 1 million, eight hundred fifty thousand, two hundred forty three dollars and some change in 2004 (I know it's not accurate but you get the gist)....WHO CARES!!! Also, when she read the list of ALL of the Walker/Bush relatives that attended Yale....my god, I almost steered my car off the road out of sheer boredom. I found no entertainment value whatsoever in this book and little or no useful information.
I was trying to get a different, informed point of view before election time but apparently this was not the book for that purpose.
I am going to go and try to resuscitate my mp3 player now...I imagine it thinks it did something wrong to deserve that kind of boredom.

Fact-filled biography hard to put down...

My wife had no clue when she bought this book for me that it would change my vote. After the 2nd chapter, I was glued to the book. How could these things be true about our President? I listened to the entire book in less than two days. I am now getting the hardback to share with my conservative friends. How could I be so stupid to back a President that used cocaine at Camp David? There are more than 100 unique facts that if any one is true, I'm happy to vote for anyone but Bush.

Very well researched and supported! No wonder the Bushs weren't thrilled.... the truth sometimes hurts! Makes me even more concerned about the upcoming elections and the outcome. This world could become a whole lot scarier with Bush in office another four years!

KITTY KELLEY AT HER BEST

A wonderful and lively book full of interesting facts based four years of interviews and research. Ms Kelly is a very intelligent under-rated biographer. She has her own points of view which she bravely defends. A great read (or should I say listen to).

It's very slanted and contradicts everything I've every read about the George and Barbara. It sounds like it was written by a very angry Democrat! Get over it; both Kerry and Gore lost!

Good story telling - gives enough detail without being boring. This book has a good back ground on the history of the Bush family

If you could sum up The Family in three words, what would they be?

George Bush and Son are crooks

I found the book depressing. To see this family use their position for money, and power. They never seem to think about how they can make this country better. It was all about them and there wallet.