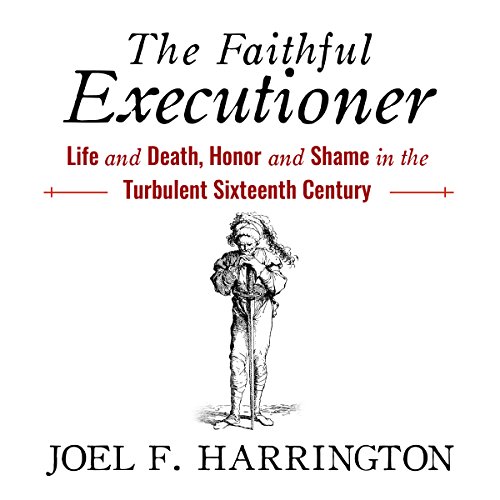 By: Joel F. Harrington
Narrated by: James Gillies
Try for $0.00

Based on the rare and until now overlooked journal of a Renaissance-era executioner, the noted historian Joel F. Harrington's The Faithful Executioner takes us deep inside the alien world and thinking of Meister Frantz Schmidt of Nuremberg, who, during 45 years as a professional executioner, personally put to death 394 individuals and tortured, flogged, or disfigured many hundreds more. But the picture that emerges of Schmidt from his personal papers is not that of a monster. Could a man who routinely practiced such cruelty also be insightful, compassionate - even progressive?

In The Faithful Executioner, Harrington vividly re-creates a life filled with stark contrasts, from the young apprentice's rigorous training under his executioner father to the adult Meister Frantz's juggling of familial duties with his work in the torture chamber and at the scaffold. With him we encounter brutal highwaymen, charming swindlers, and tragic unwed mothers accused of infanticide, as well as patrician senators, godly chaplains, and corrupt prison guards. Harrington teases out the hidden meanings and drama of Schmidt's journal, uncovering a touching tale of inherited shame and attempted redemption for the social pariah and his children. The Faithful Executioner offers not just the compelling firsthand perspective of a professional torturer and killer, but testimony of one man's lifelong struggle to reconcile his bloody craft with his deep religious faith.

The biography of an ordinary man struggling for his soul, this groundbreaking book also offers an unparalleled panoramic view of Europe on the cusp of modernity, a society riven by violent conflict at all levels and encumbered by paranoia, superstition, and abuses of power. Thanks to an extraordinary historical source and its gifted interpreter, we recognize far more of ourselves than we might have expected in this intimate portrait of a professional killer from a faraway world.

What listeners say about The Faithful Executioner

Recommended by Dan Carlin. The story was fascinating, and the author does a great job of telling the story of Meister Franz’s life while also providing a very interesting history of 16th century German culture as a backdrop. They seem like crazy times, but the epilogue reminds us we are not as far removed from this as we like to think. Narrator was excellent.

Have you ever felt compassion for the hangman?

Follow this reluctant yet effective executioner from the gallows to the gate of his home. This is a telling of a man who's destiny was chosen for him, much to the mortal dismay of those at the end of his sword!

An amazing look into the world of an executioner

This story is well narrated and is a engrossing look into the world of an executioner. I highly recommend this.

An honest and descent man trapped in a frightful occupation, which he “executes” with dignity. A story well told and well researched.

A complex and fascinating character

This book would make for a great HBO series. It can occasionally be dry, and keeping track of the dates and German names can get confusing, but otherwise highly recommended if you're interested in little known history.

Loved it, a relatable story about a controversial subject. You will find yourself moved by the life of Frantz Schmidt which is so beautifully chronicled by Joel Harrington. A masterpiece!

fantastic snapshot into the life of Nuremberg in the late 1500's as through the life of an executioner.

I honestly keep starting conversations about death by the wheel and the concept that a society that strictly condones torture also views isolation and prison as inhuman and repugnant.

The remarkable life of an ordinary man as teased out through an in-journal. No hood, no demonization, just a man recording events.

Good book , easy to listen to

The book gives insights into life from a long time ago, even though it is centered around one individual. The narration and tone is very good as well.

An interesting part of history

This is a piece of history that most of us would never stumble on. What was involved in the life of an executioner? How did they live? Who was in their circle of friends? This book tells the story of one of the most prolific executioners in Europe in the 16th century, and it is absolutely fascinating.