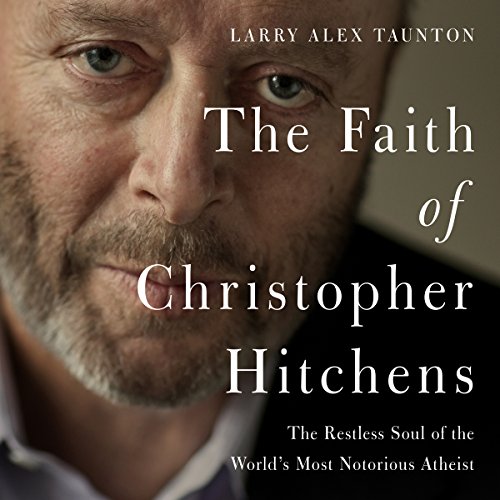 The Faith of Christopher Hitchens

By: Larry Alex Taunton
Narrated by: Maurice England
Try for $0.00

"If everyone in the United States had the same qualities of loyalty and care and concern for others that Larry Taunton had, we'd be living in a much better society than we do." (Christopher Hitchens)

At the time of his death, Christopher Hitchens was the most notorious atheist in the world. And yet, all was not as it seemed. "Nobody is not a divided self, of course," he once told an interviewer, "but I think it's rather strong in my case." Hitchens was a man of many contradictions: a Marxist in youth who longed for acceptance among the social elites; a peacenik who revered the military; a champion of the Left who was nonetheless pro-life, pro-war-on-terror, and, after 9/11, something of a neocon; and while he railed against God onstage, he maintained meaningful - though largely hidden from public view - friendships with evangelical Christians like Francis Collins, Douglas Wilson, and the author Larry Alex Taunton.

In The Faith of Christopher Hitchens, Taunton offers a very personal perspective of one of our most interesting and most misunderstood public figures. Writing with genuine compassion and without compromise, Taunton traces Hitchens' spiritual and intellectual development from his decision as a teenager to reject belief in God to his rise to prominence as one of the so-called "four horsemen" of the new atheism. While Hitchens was, in the minds of many Christians, public enemy number one, away from the lights and the cameras a warm friendship flourished between Hitchens and the author - a friendship that culminated in not one but two lengthy road trips where, after Hitchens' diagnosis of esophageal cancer, they studied the Bible together. The Faith of Christopher Hitchens gives us a candid glimpse into the inner life of this intriguing, sometimes maddening, and unexpectedly vulnerable man.

"This book should be read by every atheist and theist passionate about the truth." (Michael Shermer, publisher, Skeptic magazine)

What listeners say about The Faith of Christopher Hitchens

I shouldn’t be surprised at the duplicity of the author

The author basically says, Christopher is honest and said himself that I am a good guy.

The rest of the book goes like this, Christoper is a liar and a fake who only held to atheism due to money, book sales, and peer pressure.

In Larry’s mind, when Christopher is silent or tired, that equates to acquiescence and being “dumbfounded” by some discussion of faith. The author is somehow under the impression that Christoper was never really exposed to evangelical Christianity before and that he could tell Christopher was moved by it.
Naturally, none of his assertions about Hitch reconsidering his atheism are based on Christopher’s words, but always seem to be based on what he didn’t say. When Christopher didn’t pipe up as a rude evil god hating atheist, that must mean he was sympathetic to Larry’s version of Christianity. He like to repeat that Hitch kept 2 sets of books as a means of proving that his public image was a fraud in spite of Christopher never having verbally contradicted his unbelief in private either. He also likes to use Hitches 9-11 stand as proof that he was rethinking everything since because he didn’t support everything the left did, he must be seeing the light.

This posthumous declaration of “faith” is a joke.

I am an atheist and have read several Christian authors even recently and even read the Bible still. I don’t dismiss Larry’s poor logic, baseless assertions, and wishful thinking because I don’t believe in god or because I feel obligated to defend Hitch. I dismiss them because they are idiotic and blatantly either delusional or intentionally misleading.

My bad. I should have researched more before purchasing. Waste of money. Disappointed Biased and absolutely riddled with the authors views and not the truth about Christopher Hitchens. Deleting from my library.

An insult to Hitch

A betrayal of “biblical” proportions of an amazing person and an inspiring Atheist. With a christian “friend” like Larry, who needs enemies. The moment the world is finally liberated from the last shackles of religion is when we finally can make steps towards moral betterment. Wish I had better read the reviews and done a bit more research before purchasing this book.

I did not enjoy this book.

When I die. I hope that I don't have friends like Larry.

In this book, Larry tells us what an absolute horrible person his friend was. He was a bad son, a bad brother, a possible closeted homosexual, a godless communist and an all around completely self centered ass.

Luckily for his friend he met Larry. After which Christopher turned into a delightful intensely loyal friend.

I did not either person in this book, but I do feel that Christopher may have been a bit displeased by the accounts and speculations of his last days, but alas, he is dead and can not, which makes it incredibly convenient for our author.

An Exploitive Travesty, and Distorted Perspective

Only if I wanted to tell my friend where to find a book which exemplifies how a religious person can discount and discredit Christopher Hitchins and betray what little friendship he may have had with him.

What could Larry Alex Taunton have done to make this a more enjoyable book for you?

What does Maurice England bring to the story that you wouldn’t experience if you just read the book?

His mature style and tone adds credibility to an otherwise ludicrous prose.

What else would you have wanted to know about Larry Alex Taunton’s life?

Larry Alex Taunton’s life? This book was meant to be about Christopher Hitchens. I need to know nothing more about Taunton.

I think this is a re-fabrication of discussions the author had with Hitchens which were actually done as a professional engagement, not a friendly road trip. I suspect the reality was that Hitchens did what he was paid to do, which was to be as constructive and participative as possible. And as usual, a Christian preacher turned it into another money-maker and attempt to convert readers through fear and threats of damnation, couched in a ridiculous suggestion that Hitchens was ready to convert, had seen the light, once he knew he was dying. And if there were glimpses of friendship, Taunton betrays them so many times as to prevent me from finishing this book.

I regret purchasing this book upon quickly realizing Larry Alex Taunton is a fundamentalist Christian nimwit who doesn't have a thimble of the breadth and depth of Christopher Hitchens. This book is a posthumous cash-in on a very tentative and unproved relationship between the author and Hitch. Avoid this book at all costs. Also avoid Thomas Nelson, the book publisher, who has a history of smooth-looking titles that are secretly interesting in converting you, the reader. They built their company on Bible publishing for increasingly un-read Christians who need to be spoonfed ideas. Pass the barf bag.

I love Hitch and have read all his books and have spent hours watching him on YouTube; it punched a hole in my life when he passed.

This just did not hold me for more than 30 minutes.

To those who seek to destroy Larry by accusing him of the assumption that hitch had a deathbed conversion need only read the epilogue to draw an alternate conclusion. This book challenged me as a Christian and how I respond and we’re like those I with whom i disagree

Hitch and the Accent

It is actually narrated ok, except I would much prefer an Englishman or someone capable of an English accent to read for Hitch (considering several portions of the book comment on it).

When I was a young boy attending boarding school I was told I must go to church each Sunday unless I had a note from my parents stating otherwise. I loved the sermons as they made perfect sense to my young mind, but was bemused when the young congregation closed their eyes, put their hands together and prayed. I didn't know who or what they were talking to since I was never given any direction from my parents. Thanks parents, you did me a favor. In my later years I came to realize what Christopher was talking about, I always believed there was something not right with Religion, so I turned to Deism. We came into this world totally innocent, our brains hard drives are clean and pure, then adults come along and fill them full of things that can only be damaging to us as a collective. History tells the rest of the story. Thank you Christopher.

I hope Hitchens repented of his sin and placed his trust in the Lord Jesus!