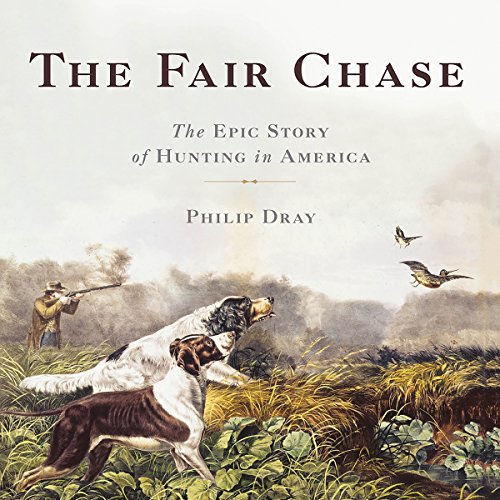 By: Philip Dray
Narrated by: Will Collyer
Try for $0.00

An award-winning historian tells the story of hunting in America, showing how this sport has shaped our national identity. From Daniel Boone to Teddy Roosevelt, hunting is one of America's most sacred-but also most fraught-traditions.

It was promoted in the 19th century as a way to reconnect "soft" urban Americans with nature and to the legacy of the country's pathfinding heroes. Fair chase, a hunting code of ethics emphasizing fairness, rugged independence, and restraint towards wildlife, emerged as a worldview and gave birth to the conservation movement. But the sport's popularity also caused class, ethnic, and racial divisions, and stirred debate about the treatment of Native Americans and the role of hunting in preparing young men for war.

This sweeping and balanced book offers a definitive account of hunting in America. It is essential listening for anyone interested in the evolution of our nation's foundational myths.

"Less than ten percent of the population now hunts, but they still represent a large symbolic place in our national narrative. Philip Dray helps us understand why hunting and hunters continue to shape our ongoing debates about our relationship to wildlife, endangered species, and environmental policy. Given the dramatic changes in the management ethos of our natural resources brought on by the Trump administration, The Fair Chase is a timely and engaging reminder of what's at stake." (Jan E. Dizard, author of Going Wild and Mortal Stakes)

"A fluid and fascinating history for hunters and nonhunters alike." (Garden & Gun)

"Revealing...[Dray] does a marvelous job walking us, mostly chronologically, through nearly every aspect and controversy of hunting's long history, with themes of ethics ('fair chase, the idea that hunted animals must have a chance to evade or flee their pursuers') and conservation looming large throughout...A lively history that can be enjoyed by hunters and conservationists alike." (Kirkus)

What listeners say about The Fair Chase

This book did a decent job of staying balanced, but gets too political at times. The author tries to hide his core belief that eating meat is bad by giving an untrue analysis of modern agriculture. Furthermore he quotes unscientific findings in human anatomy to justify not consuming meat. Sometimes one should educate themselves more before stating falsities as fact. This is the issue with a liberal artist writing in scientific issues, one must read more and write less until you have seen all sides of science. This was written close to accurate but takes the typical Dr. Oz and Oprah spin of pseudo science.

First 90% of this book was very interesting and informative. Unfortunately the last 10% was political opinion. I wanted an unbiased history of hunting and the culture developed by fair chase practiced. Unfortunately the author makes several arguments against hunting and trivializes the arguments for hunting. I believe this is a complex issue that should be handled with understanding on both sides. But when one makes the assumption that either side is morally reprehensible there cannot be reasonable dialogue.

This book is pretty heavily skewed towards an anti-gun, anti-hunting and anti-carnivous attitude. Not at all what I expected from the brief description and title.

slow and confusing. unless you're a PhD in American hunting history you'll be just as confused.

In my opinion, this book is not hunter or second amendment friendly. Information is present far more from the bunny hugger point of view.

If your looking for history and truth you will not find it here.

This is an anti gun and anti hunting book disguised as a history book. It takes little scientific fact into account and focuses on hunting being bad as a result of people’s feelings. The people with these feelings are the inner city folks that he admits have little to no practical education in wildlife management. This book is a sham of a history book and I am very disappointed to have spent any money on it.

Well written, engaging, and informative, for most of the book. Unfortunately, the author's anti hunting bias is inescapable, especially toward the end of the book. If it were not for his moralizing rant at the end, it would have received a five star review, as he managed to retain at least the appearance of balance up to that point.

the author's anti huntung position is very prevalent. The book is also disjointed and focuses on trophy hunting. Today trophy hunting is the smallest part of hunting, most hunters hunt for food like our fathers, grandfathers, and generations past.

not how I expected it to end.

I really enjoyed most of this books telling of the history and culture of hunting. It covered details of this topic I was not familiar with. I also found some further reading material from it. however the end of the book and especially the epilogue were an unexpected turn into the animal rights agenda, I was sadly disappointed in this turn of events.

Not what expected, still enjoyed

I expected stories of hunting, sits in the stand alongside some of the great hunters, this is not that. It’s more of a political satire. Still really enjoyed.

interesting book with a meandering storyline, not upfront, hid the intent until the very end