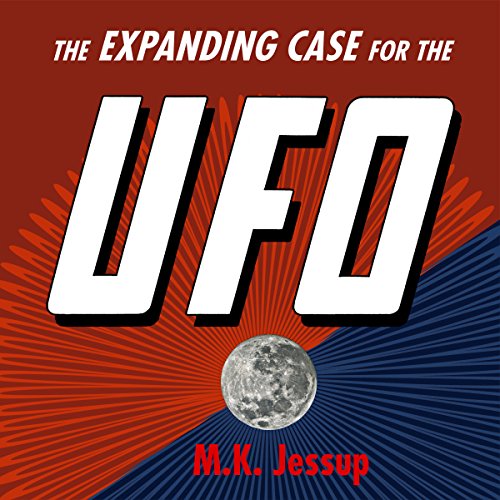 The Expanding Case for the UFO - First Edition and Association Copy

"From the craters of the moon, the jungle-ridden cities of prehistory, the world's scattered Pygmy tribes, and the columns of yesterday's newspaper comes new and thought-provoking evidence for the existence of space life."

Such were the words on the original dust jacket of this, the first edition of The Expanding Case For the UFO.

First released in 1957, The Expanding Case was the sequel to perhaps the most notorious book in the history of ufology: The Case for the UFO, which drew the interest of the US Navy and resulted in the infamously annotated "Varo Edition".

The annotator of the Varo Edition, the mysterious Carlos Allende, claimed to have been a witness to the Philadelphia Experiment. Allende seemed to think that the book's author, astronomer M.K. Jessup, knew more about the experiment than he was admitting, and had maybe played a role in it.

The Expanding Case For the UFO was the last book ever written by M.K. Jessup, and it ties together many of the controversial threads first exposed in The Case for the UFO. This special reprint features the original "lost" introduction by noted zoologist Ivan T. Sanderson.

As evidence to how dangerous this material was at the time, it was only two years later that Jessup - after experiencing threatening phone calls and alarming synchronicities "too unbelievable to describe" - would be found dead in a park in Dade County, Florida - supposedly a "suicide".

While Allende claimed Jessup killed the hitman sent to terminate him, and was able to escape by trading identities with the hitman, the facts remain obscured - like the UFOs themselves - in a most intriguing fog.

The Importance of Pygmies

Dr. Jessup makes some really important observations in this book, the kind that everyone should read and understand. It's a shame he's not still around, and cursed be the unhallowed hands that caused his early demise. At least he left us his works to ponder and consider, and this book is an important step to increasing one's understanding of the non-explainable.