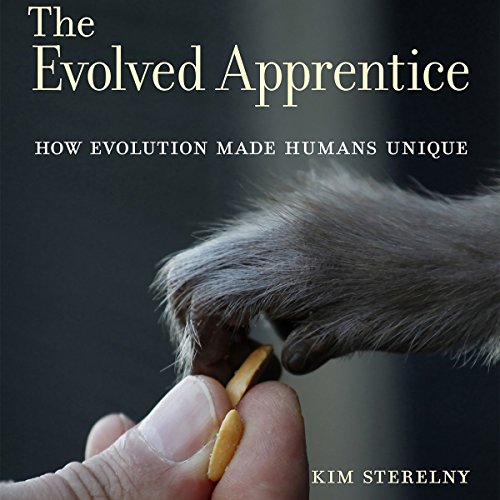 A new theory of the evolution of human cognition and human social life that emphasizes the role of information sharing across generations.

Over the last three million years or so, our lineage has diverged sharply from those of our great ape relatives. Change has been rapid (in evolutionary terms) and pervasive. Morphology, life history, social life, sexual behavior, and foraging patterns have all shifted sharply away from those of the other great apes. In The Evolved Apprentice, Kim Sterelny argues that the divergence stems from the fact humans gradually came to enrich the learning environment of the next generation. Humans came to cooperate in sharing information, and to cooperate ecologically and reproductively as well, and these changes initiated positive feedback loops that drove us further from other great apes.

Sterelny develops a new theory of the evolution of human cognition and human social life that emphasizes the gradual evolution of information-sharing practices across generations and how these practices transformed human minds and social lives. Sterelny proposes that humans developed a new form of ecological interaction with their environment, cooperative foraging. The ability to cope with the immense variety of human ancestral environments and social forms, he argues, depended not just on adapted minds but also on adapted developmental environments.

The book is published by The MIT Press.

“A landmark in theorizing about human cognitive evolution… I recommend it highly.” (The European Legacy)

What listeners say about The Evolved Apprentice