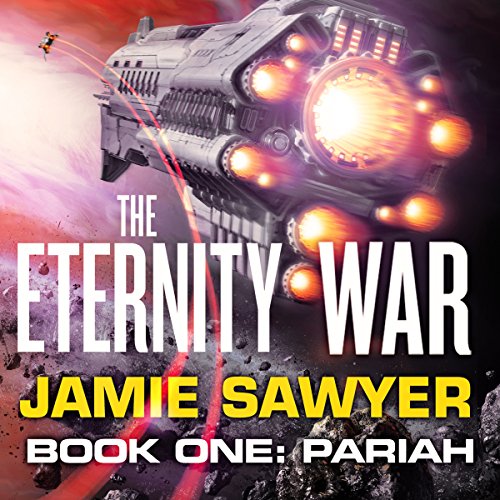 By: Jamie Sawyer
Narrated by: Katherine Fenton
Try for $0.00

The soldiers of the Simulant Operations Programme are mankind's elite warriors. Veterans of 1000 battles across 100 worlds, they undertake suicidal missions to protect humanity from the insidious Krell Empire and the mysterious machine race known as the Shard.

Lieutenant Keira Jenkins is an experienced simulant operative and leader of the Jackals, a team of raw recruits keen to taste battle. They soon get their chance when the Black Spiral terrorist network seizes control of a space station.

Yet no amount of training could have prepared the Jackals for the deadly conspiracy they soon find themselves drawn into - a conspiracy that is set to spark a furious new war across the galaxy.

"Jamie Sawyer is easily one of the best military SF writers working today - a must read for anyone who grew up watching Aliens and reading 2000AD." (Gavin Smith, author of The Bastard Legion)

"A gripping read that moves at warp speed." (Jack Campbell, author of the Lost Fleet series)

What listeners say about The Eternity War: Pariah

Not up to scratch

If you're expecting strong links to the previous Lazarus War books you are likely to be disappointed. Not only does the author struggle to realistically present the story from a female pov, the narrator does not clearly define characters well. It seemed to me that the narrator was confused at times and lapsed into the persona of other characters by mistake.The language used in this book had me in perpetual eye roll to the point I couldn't finish it. When the dialogue is littered with alternatives to the word SAID and the characters start exhorting (and similar substitutes) it becomes quite jarring to the listener. Male authors often fail to portray the perspective of a strong female lead with credibility. This is certainly the case here. More research please. (What woman would think of a sexual encounter as rutting? And come to think of it there was way too much introspection). Although I liked the Lazarus Wars series this was so disappointing and frustrating I couldn't finish it.

Great idea, but I got bored halfway through.

I like a good, long book and this is short by my recent standards. But although I stuck with it at first I finally gave up halfway. Some very good ideas in it but for me it just didn't hold my interest.

Another cracking sci-fi romp from JS

If you enjoyed the Lazarus War Trilogy, you'll know what your letting yourself in for. More sim op shenanigans featuring a new rag tag outfit as they fight their way from one explosive action scene to the next.

Okay but not Lazarus legion

Similar pace as the other series but a weaker lead. Nice to revisit the krell universe.