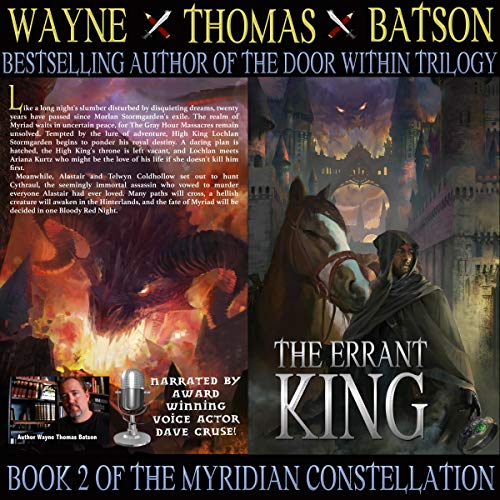 By: Wayne Thomas Batson
Narrated by: Dave Cruse
Try for $0.00

Like a long night's slumber disturbed by disquieting dreams, 20 years have passed since Morlan Stormgarden's exile. The realm of Myriad waits in uncertain peace, for the Gray Hour Massacres remain unsolved.

Tempted by the lure of adventure, High King Lochlan Stormgarden begins to ponder his royal destiny. A daring plan is hatched, the high king's throne is left vacant, and Lochlan meets Ariana Kurtz, who might be the love of his life if she doesn't kill him first.

Meanwhile, Alastair and Telwyn Coldhollow set out to hunt Cythraul, the seemingly immortal assassin who vowed to murder everyone Alastair had ever loved.

Many paths will cross, a hellish creature will awaken in the Hinterlands, and the fate of Myriad will be decided in one bloody red night.

What listeners say about The Errant King

Wayne Thomas Batson has definitely improved as a writer. His prose is more colorful, his world building deeper, his characters more relatable, and his stories more original than his earliest stories. This book follows the Sword in the Stars and raises the stakes in a way that grips you and keeps you invested, even while you follow multiple story arcs to a cliff-hanger conclusion. There were a couple of brief instances where I felt like the allegorical elements were a little too forced, but the book overall does not suffer form this flaw. The world of the Myrdian Constellation is fascinating and well put together. Dave Cruse brought all of it to life in a fantastic way in audio form. He does Cythraul and Morlan, the chief villains, with particular skill, and also brings a variety of accents to the table. If you enjoy fantasy novels in the vein of Brandon Sanderson, L.B Graham, and otheres like them, you will enjoy this book.

simply amazing! this is honestly one of the best modern Christian fantasy albums! so many deep messages, so many twists and turns. The reader was amazing and really got me immersed in the world. what can I say other than get this book and listen for yourself!

I love this book, because it's packed with adventure.
I've Introduced it to my brothers and they love it too

Clean reading for all ages!

The second book is just as good as the first. :)

It's hard to find clean reading these days, but this is one you can count on! Great story and one I can recommend to all my friends with teenagers and my own grandchildren. Thank you, Wayne Batson!

Evil villains with righteous heroes to battle with a mix of humor. I love Fred and Arianna.

Perfect Book 2 of an awesome series

Story: Batson has obviously done his homework crafting this master epic because it seems every detail is in place- this story will certainly keep you engaged the entire time! I truly feel connected to the characters in the book and can't wait to see what happens in book 3. If you already read book 1, then I don't need to spend any time convincing you to continue!

Performance: Once again Dave Cruse is truly masterful in his performance. I don't need to know who is talking because I can just hear it in the distinct voices. Couldn't ask for more!

great reading I enjoyed listening to the story,.

looking forward to the next book.
thanks for a great read. the plotv took a little while to unfold, but it was a well read book.

the characters and the quests grow together....a little slownat first, however the pace quicken as the story and stakes builds. can't wait to read the 3rd book!

An adventure you won’t soon forget...

It had been a long time since I had last read The Errant King, not long after its original release in paperback. So when I had the chance to read these fantastic books again in preparation for the long-awaited self-published continuation of the story, I jumped at the chance. Batson’s work is never to be missed and always to be enjoyed, and that’s especially true here.

Dave Cruse’s voice makes for lovely accompaniment to such a massive fantasy tale, and his voices are often precisely on point for the characters as the text represents them. His deep voice and nuanced accents breathe life into even the most nonhuman of speaking roles, but as with his narration of Sword In The Stars, the female voices tend to feel just a tad awkward or cringe-y at times. But that is more than made for in the description of the thrilling action scenes, which are more than plentiful here.

Dark, yet hopeful; sorrowful, yet triumphant; humor and mirth, but with murky clouds swarming the horizon. That is The Errant King in a nutshell, and if you want to pass such an experience by...well, I guess there’s no helping some people!

Dave Cruse is amazing and the Wayne Thomas Batson has crafted a captivating world and story in this series.

I LOVED IT!!! I LOVED IT ALL!!!! The narrator was a bit wooden: for future audiobooks I suggest getting a few different guys and girls instead of just the one bloke: BUT THE BOOK WAS SO GOOD THAT IT DOESN'T MATTER REALLY!!!