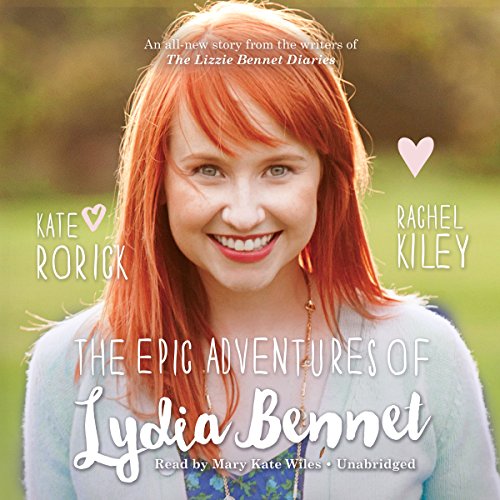 The Epic Adventures of Lydia Bennet

Based on the Emmy Award-winning web series The Lizzie Bennet Diaries, this is a new novel starring Lizzie's spunky sister, Lydia, as she navigates the joys and pitfalls of becoming an adult in the digital age.

Before her older sister, Lizzie, started her wildly popular vlog, Lydia was just a normal 20-year-old plotting the many ways she could get away with skipping her community college classes and finding the perfect fake ID. She may not have had much direction, but she loved her family and had plenty of fun. Then Lizzie's vlog turned the Bennet sisters into Internet sensations, and Lydia basked in the attention as people watched, debated, tweeted, tumblr'd, and blogged about her life. But not all attention is good.

After her ex-boyfriend, George Wickham, took advantage of Lydia's newfound web fame, betrayed her trust, and destroyed her online reputation, she's no longer a naive, carefree girl. Now Lydia must work to win back her family's trust and respect and find her place in a far more judgmental world.

Told in Lydia's distinctive, eccentric, and endearing voice, The Epic Adventures of Lydia Bennet picks up right where The Secret Diary of Lizzie Bennet left off. Featuring fresh twists, wonderful new characters, and scores of hilarious texts and tweets, The Epic Adventures of Lydia Bennet takes you behind the webcam and into the lives of your favorite sisters in a way that's sure to satisfy existing fans and delight new ones.

What listeners say about The Epic Adventures of Lydia Bennet

This is a wonderful book especially read by Mary Kate Wiles. It completes the trans-media aspect and makes it much re believable when read in Lydia’s voice.

If an adventure is a trip without a destination...

If an adventure is a trip without a destination, I’d have to say this is more about her journey than her adventures. Because this was all about the ‘trip’ rather than her destination.

My heart hurt for Lydia. As everything went wrong, again (admittedly by her own faults), she stopped caring, and that was the strange thing. But, I get it. Girl, I have been there. I still go there sometimes. I’m glad you caught on eventually, and despite not caring, you didn’t give up.

Okay, so, it’s safe to say these characters are real to me. And they are. In a way, they always have been, due to my love of P&P, but, there brought to life in such a new way. And, thanks to the amazing writers, and the talented Mary Kate Wiles, Lydia was brought to life in a way that made her.... sympathetic. I don’t want to say redeeming, but... they made her likable in a way she’s never been before.

Okay... the scene where Lydia confronts George... I knew it’d be in there, and I knew they had thought about having it in the webseries, but decided not to, but I didn’t know. I didn’t know what it’d be, or how much I would love it. I am so proud of Lydia.

AND MARY! I was initially disappointed that things with Eddie didn’t work out, but man... he was a douche. I’m honestly bit horrified. But I’m glad things worked out so much better for her. And it was nice to have Denny mentioned, even if I was temporarily confused, thinking of P&P’s version of Denny, and wondering why they were hanging with George’s friend. But, then I remembered, in the videos, he’s Mary’s friend.

Also, I always liked what they did with Mary in the webseries. I was always disappointed she wasn’t in more of Lizzie’s videos, and enjoyed her in Lydia’s videos.

THE ONLY THING I AM DISAPPOINTED WITH, IS THAT WE NEVER GET TO SEE ANY LYDIA AND GIGI INTERACTIONS. I always wanted to see it, but, understandably it never happened. But, hello! She’s going with Darcy to the Bennet’s for Christmas. WE MISSED IT BY A FREAKING DAY.

I so enjoyed getting to be able to join Lydia on her journey. Watching her grow, and cope. Meet new friends in New York, that she actually keeps. Good friends. Nice parallels with her running to Jane, and it was nice to see how Jane had changed. AND BING CALLING LYDIA HIS FUTURE SISTER-IN-LAW!

Obviously I can’t be coherent, but my love for this book, and Lizzie’s book, is real. Hell, anything Pemberley Digital does, has my love.

A little angsty but a satisfying conclusion

Lydia's story was like a trainwreck in slow motion, but it made her triumph that much more sweeter.

Mary Kate playing a subdued Lydia was jarring, but fit well with her story from the LBD series. The Bennet parents are given much more exposition here, and you actually come to like their mother.

MK also does very uncanny impressions of Mrs. Bennet... and Jane. Dear lord, does she do that impression justice.

Speaking of which, we need a third book with Jane as the protagonist! Although Laura Spencer is pretty busy these days...

Mary Kate does it again!

I'm glad I stumbled onto LBD recently. After watching them on YouTube I really wanted to see what was happening with Lydia. Both the story and Mary Kate did not let me down, she is a fantastic actress and I love seeing how Lydia progressed after the series over. Perfect ending for this character!

This unexpectedly gave me many feels

It was surprisingly moving to follow Lydia's difficult road to self acceptance, forgiveness, and healing.

Have you listened to any of Mary Kate Wiles’s other performances before? How does this one compare?

This is Mary Kate's first audiobook, but its one she should be very proud of. Her reading show her great depth and understanding of the character of Lydia Bennet, which is to be expected, but she also fully brings to life a new cast of characters. I hope she does more books.

I loved hearing more about Lydia's story. Hearing Mary Kate voice this was amazing and epic and everything this fan girl could have wished for.

I loved listening to this. Her impressions of some characters would be hilarious and as she'd narrate it was also soothing, but she also voiced Lydia perfectly too.

Mary Kate did a great job bringing her story to life! I really liked the psychology history as well since that was her major.