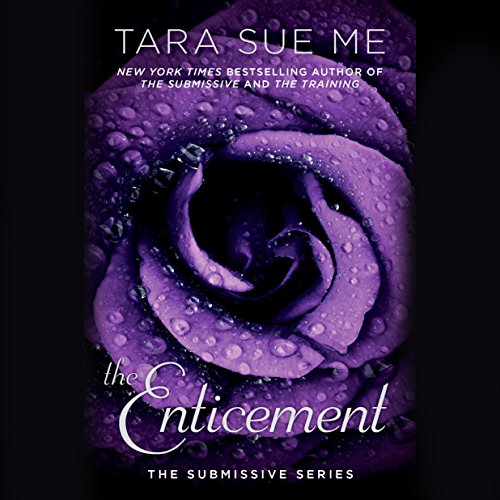 New York Times best-selling author Tara Sue Me returns to the story of Abby and Nathaniel to explore the passion after the happily ever after....

Limits were made to be pushed.

Abby West has everything she wanted: a family, a skyrocketing new career, and a sexy, Dominant husband who fulfills her every need. Only as her life outside the bedroom becomes hectic, her master's sexual requirements inside become more extreme. Abby doesn't understand Nathaniel's increased need for control, but she can't deny the delicious way her body reacts to his tantalizing demands....

Between Abby's reluctance and Nathaniel's unyielding commands, the delicate balance of power between the dominant and his submissive threatens to shift. And as the underlying tension and desire between them heats up, so does the struggle to keep everything they value from falling apart....

What listeners say about The Enticement

Becoming a submissive all over again

If you could sum up The Enticement in three words, what would they be?

Nathaniel. He's an amazing dom. He knows what Abigail wants. He is so connected to her, that he can read her thoughts. He is just awesome

Which character – as performed by Angelica Lee – was your favorite?

Abigail. She can transmit Abby's and Abigail''s attitude perfectly

Do you often wonder about what happens to the characters of a book (or series) that you love after the characters get their happily ever after? I always do. I love books that have epilogues that gives readers a glimpse of the characters’ future. Not many books goes the extent into the future. This is what The Enticement has. Abigail and Nathaniel has been married for 6 years. They have two beautiful kids and have a perfect marriage. Sadly the routine of life interferes with their D/s relationship and they can't play as often as they did at the beginning of their relationship. How will they sort this up? How will they find a balance between family, kids, work and their BDSM lifestyle?

I loved this book so much. I was so excited last year when I found out Tara had decided to write more about Abigail and Nathaniel’s story. I loved the first 3 books and the novella about their honeymoon and I couldn't wait to read this new book of the series. I was so excited when I got the email from Amazon telling me the book was available on my kindle. It didn't matter that it was midnight and that I was exhausted from working and studying (on a monday, of all days), I had to start reading it right away.

The sex scenes were scorchingly hot. Nathaniel is a sexy dominant. He knows what he’s doing especially if it’s about fulfilling Abigail’s fantasies. I love their exhibitionist side. That was my favorite thing in this book.

Love The Enticement. 100% Recommended. Bring me The Collar now.

I simply love Angelica Lee’s narration. Her voice is perfect for Abigail, especially when she’s wearing Nathaniel’s collar. When she’s reading as Abby the wife, she’s has one attitude, and when she’s reading as Abigail the submissive, it’s another so different. Her narrations of the scenes when they are playing are just perfect. I have to mention that her voice for Nathaniel was deep and sexy, also stern and commanding, transmitting very well his personality.

I have a hard time breaking away from it. amazing writer, and reader.

can't wait to dig into the next book.

A knowledge of Information

I liked the story. The narration was good and performance was very good. I would've rather had some sexy guy narrator for Nathanial though. Would've made for a better and more exciting story.

love to hear about Nathaniel and abby's life

great book can't wait to get the next one.
I would wish that there was a thousand books about there life so I could read about them the rest of my life. because i feel so happy afterwards like if I'm in a dream world.

I just don't know? I wanted to love it?

I was hooked to the story from the moment I purchased it. I was excited to see where the story would go. I personally wanted to like the book, I think I might have, but I found myself having anxiety reading the book. I was frustrated with Nathaniel because I thought he was a little selfish. Abby was trying to maintain their D/s lifestyle, the house keeping, raising the children and a part time blog post/job. Nathaniel wanted her wearing her collar more often then they originally agreed. However, the dynamic of their marriage changed when they welcomed their children into the world. When you are a parent, the children come first. Abby being the primary care giver was a litlle overwhelmed and although she enjoyed the D/s lifestyle she new there were other things that took precedence over the lifestyle. That is not to say Nathaniel doesn't deserve to have his needs met, I just think he had poor timing with his request. He discovered that when he pressured her to scene in their playroom and she couldn't/didn't get turned on. She felt like a failure, he tried to reassure her and accept blame for it, but then he assigned a writing project for her and she spiraled out of control. He could have asked her what was going on and he could have talked with her but instead he just added more work for her. I would have liked to have had them share a little "vanilla" but it didn't feel like there was time for that in their busy lives and he didn't seem to express that he would have settled for it either.

I loved the concept of the book because I love this couple, Nathaniel and Abby in, The Submissive, The Dominent and The Training. I even enjoyed parts of The Chalet. Because I enjoyed that part of the series I was really psyched about the idea of going into their marriage 6 years into their future with children. The story started to drag for me during her 7 day stint as she was collared on his business trip. I was kind of feeling like, yeah I get it, he tests her limits, he punished her, no big O for her or him, blah, blah, blah. I myself was more interested in how the children were doing, she had a sick child at home, how the marriage was going to survive that Woman he hired to work for him and the potential she could have on this relationship. I was also worried about the impact of Meg, Abigail's boss was going to effect the marriage too.

What aspect of Angelica Lee’s performance would you have changed?

Angelica's performance was fine, I just wish they would have brought back William Sharpe to narrate the Male characters voices.

Was The Enticement worth the listening time?

I wanted Abby to find her voice a little and tell Nathaniel....Hey I am overwhelmed with the new job and I can't do more journaling/writing then she already does. Can she just get thru the rough spots first before you demand more collar time from her. I have read other books about the D/s lifestyle and I know it's a balance when you bring marriage and family into your relationship but what I think Nathaniel lacked, was a little compassion and realistic expectations. He did seem to support her dreams and her career but yet that is when he changed and instead of talking about it he kept his feelings from her and his solution to the "job threat" was to throw more Dom at her. I rated the story 3/5 because I had anxiety, I was frustrated at both Abby and Nathaniel. The sex didn't do it for me because I am not into the lifestyle and what they do on their week experiment isn't my thing. I will say however that they still love each other deeply and it shows when they play because she is all about pleasing him. I didn't feel it too much from him only because I don't think she was rewarded enough for her efforts. He did express his gratitude and was proud of her but I am all about the big finish😝 wink wink.

Great continuation of a beautiful love story. Shows the challenges this couple has with their fast paced life style and how they worked through them to make everything work out.

Not really got me.

I found lots of it just boring. Unless you really like listening to a submissive talk a lot about kneeling, don't waste your time/money.