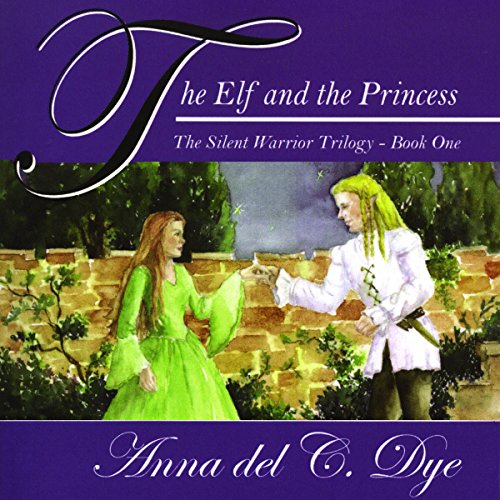 The Elf and The Princess

A most thrilling and captivating tale for readers of all ages....

Menarm was a great and prosperous kingdom, known throughout the lands for its friendly, hard-working people and fair trade. But a bitter struggle of succession between brothers left the kingdom devastated, the people divided. Some stayed with Fenil, who had conquered the crown, others followed Renil to the wild lands of the north, founding a new kingdom.

Now Adren, the last princess of the vanquished realm of Menarm, finds herself alone in a world where women live in the shadows of men. Not only must she battle her enemies, but also a truth that could obliterate her last hope for happiness and bring dishonor to all those whom she holds dear. On her quest, she finds unlikely allies in a powerful prince and a defiant mercenary, only to be devastated by an ancient and wily elf. Will Adren be able to survive this final assault?

The Elf and the Princess is a brilliant tale of true love, high adventure, and medieval-style warfare between elves, men, and orcs. Drawing inspiration from the myths and legends of Europe and from such writers as J. K. Rowling and J. R. R. Tolkien, Anna del C. Dye spins a completely original tale that will leave the reader wanting more.

What listeners say about The Elf and The Princess

What did you love best about The Elf and The Princess?

The Elf and the Princess reminds me so much of The Lord of the Rings. It has the adventure, wars, mystery, and even a love story that was intriguing. Keeping her identity secret, I often wondered how the princess would reveal who she was to the man she loved so deeply. I thoroughly enjoyed this story. The narrator did a great job and I liked all his voices. If you’re a Lord of the Rings fan, then you’ll love this one.

A fun story to listen to, which had a lot going for it. I liked the author’s writing style, and how creative the story was. The characters were well thought through, and I can tell they’ll stay relevant throughout the series. I also liked the setting and how descriptive it was. I was given this free review copy audiobook at my request and have voluntarily left this review.

PRINCESS AND HER ELF

A WONDERFUL CLEAN ELVEN ROMANCE! THE NARRATOR GEORGE TINTURA HAS A VERY GOOD VOICE, AND THE STORY IS FILLED WITH MYSTERY AND ADVENTURE! I LOOK FORWARD TO BOOK 2 !!!!!

This is the debut book of Anna del C. Dye. I don't generally read too much from the Fantasy genre, but this was a fun, different and "real seeming" book. The events included battles, romance, a little mystery and a little sadness at times when events caused difficult situations.

There was a lot of description in the book and if made for an interesting read.

The narrator, George Tintura had a pleasant to hear voice and each character was portrayed in a different way making it easy to know the speaker, even the female voices.

It was an enjoyable book with a few twists and turns along the way. I am sure book 2 will be an interesting read as well!

I received an ebook version from the author for my honest review which I have given.

The reader was very good and made the story come alive. The author provided vivid imagery. Made me feel like I was in the cave or on the horse with the characters. A story you can fall into!!!

This is a well told epic revolving around several characters that are made to feel special to the reader. It may be a tad predictable at times, but in the mix of familiar elements with foreign lands it becomes all the more endearing.

This book provides some decent fantasy with good narration. Nothing here is particularly ground-breaking when it comes to elves, orcs, princesses, and wars. Orcs bad, Elves better than human culture... you've seen it before.

I enjoyed the main heroine Adren, who is quite bloodthirsty after her kingdom is slaughtered. There's bits of a plot you've seen elsewhere about a woman becoming a warrior despite that not being the done thing in their culture, but it doesn't dominate the narrative.

For me, the book dipped around the middle bit, where the characters went on a war campaign. It became less interesting hearing about characters marching off to battle and discussing tactics. And I sometimes felt the narrator was too calm during scenes of battle, as I found my attention wandering while characters were having guts ripped out and exposed.

(I feel that I should mention that I got racist overtones from the ultimate villain: a kingdom of dark-skinned people described as universally lazy and violent. Which nothing in the text contradicts.)

After the war is concluded, the focus is on the lead's romance and how it wraps up after surprise family revelations. I found this more interesting than the campaign bits, though it still followed a predictable course.

The book wrapped up all its events nicely enough, and I don't feel a need to continue this series.

I received this book for free in exchange for a fair and honest review.

A great combination of fantasy, war, romance and adventure. I love Princess Adren, the feisty heroine/mute Silent Warrior. There’s something for everyone-Princes, Warriors, Elves, Orcs, fast paced action, suspense, intrigue, twists, betrayals, fighting, complex characters, and romance all rolled into a captivating storyline. I received an advance audio book as a gift and enjoyed the narration by George Tintura. He did an excellent job on the variety of voices. I look forward to the next book in this trilogy. Enjoy!

I started this book with high hopes. I liked the book blurb description and was up for an Elven adventure. However, this story fell a little short. The beginning was easy to start with but then the timeline jumps around a bit and I had trouble following who did what when. Now, if you get past that, the story settles on 16 year old Princess Adren.

Initially, I really liked her character. Her mother dies shortly after we meet her and Adren’s kingdom is in ruins. I worried she wouldn’t be able to save herself let alone her kingdom! But she has been taking sword-fighting lessons from a master, Donian. Now he was a fun character! I loved his harsh nature and no-nonsense training. He’s merciless in her training and she picks up the art quickly. Now, I did find it a bit too convenient that she mastered sword training so quickly, but it’s necessary for the story to progress.

Adren must venture out on a quest to find allies but her little world is one where women are kept safe and secure and don’t learn to fight with swords and gallivant around the countryside. Initially, I found her solution to this problem endearing, because who wouldn’t want to put on a mask and pretend to be someone else, especially if you have to kill anyone? Still, I was a little dismayed that in this fictional world, ladies in general have very little to do with the plot.

Adren hasn’t spent any time with elves and now that she’s met some, she’s fascinated by them. Here’s another part of the story that didn’t work so well for me. We know that she was raised with stories about elves and there’s obviously contact and trade between humans and elves, and yet dear little Adren is totally blank on Elvish factoids. Really? Sigh… So I felt that contradicted what we learned earlier. Then when she learns why her ears are the shape they are…. well, it was just a lot of drama for no reason.
Still, there’s plenty of action and armor and sword fighting and heroes. I liked all those bits. Then we have the love story. Adren loves a certain person and then yet another person is falling in love with Adren (unbeknownst to her). Again, I felt the love story was a whole lot of drama for very little entertainment. Also, the wrap up to that romance in this book was a little cliched and I expected that twist well before it was revealed.
All together, the tale held potential to be a fun high adventure but fell short with some inconcise writing and over-done drama. 3/5 stars.

The Narration: George Tintura did an OK job with this narration. He sounded interested in the story all the way through the book. He does make an effort to do accents and keep character voices distinct but they kind of go in and out. His grumpy voice for Donian is pretty good and most of the time, he does a believable 16 year old Princess Adren. He also makes a believable snobbish elf. 4/5 stars.

➜ Susan received a free copy of this book from the author. Her opinions are 100% my own.