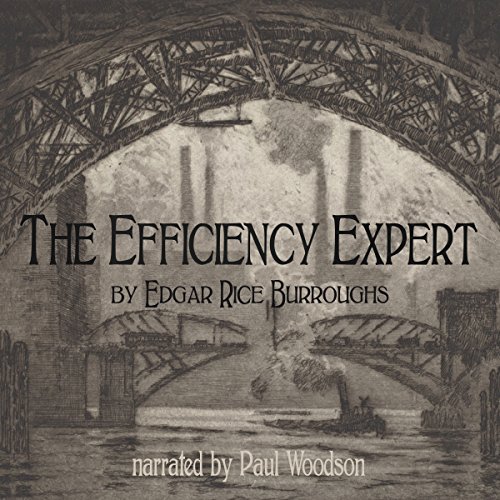 By: Edgar Rice Burroughs
Narrated by: Paul Woodson
Try for $0.00

Jimmy Torrance, Jr., was a champion athlete in college, if not the brightest scholar. Upon graduation in 1919, he emerges starry-eyed into the grand metropolis of Chicago, cocksure that he will immediately be hired as the manager of a large business. But the real world differs measurably from Jimmy's grandiose expectations.

As the rough-and-tumble, gritty world of Chicago knocks the scrappy youngster down a few pegs, he crosses paths with all the archetypal characters of early pulp fiction: Little Eva, the hooker with a heart of gold; Harold Bince, the scheming embezzler; Elizabeth Compton and Harriet Holden, two classy society ladies; and, most intriguingly, The Lizard, a sagacious safe cracker and pickpocket who just might hold the key to Jimmy's future.

Written by the grandfather of science fiction and master pulp writer Edgar Rice Burroughs (author of Tarzan and John Carter of Mars), this oft-overlooked urban adventure of the 1910s-1920s brings all the classic elements of a gripping story into one short novel about an enterprising, determined young man out to begin his professional career in the real world - even if it means pawning his possessions, consorting with criminals, and forging his recommendation letters to land his first "respectable" job.

Professional film and stage actor/narrator Paul Woodson brings this American classic to life, bringing to life each of the over 30 characters in this coming-of-age piece, which is by turns both dramatic and comical.

What listeners say about The Efficiency Expert

Would you consider the audio edition of The Efficiency Expert to be better than the print version?

I always enjoy any narration that Paul Woodson does.

Little Eva because society labeled her a prostitute. It was her way to survive the life she was handed. She also had a heart of gold.

Not often do I step back into the classics and well I should. They hold the interest of generations through the author's ability and message conveyed. This one was brought to life for me by narrator Paul Woodson.Jimmy Torrance could have been any one of us. He barely got through college, but realized through comments from his father he hadn’t pleased him and in hindsight he hadn’t pleased himself. With the gumption of “I can do better”, he seeks his first job in Chicago. Preferring that, to an offer his father had for work in the family business.His lessons are numerous in a city of riches and poverty. The message the author conveys to me is one should never spurn those who have less nor give them a fair shake as you should with all society, whether it be a prostitute or even a pickpocket. And what we currently say, what goes around comes around, is very much in evidence in this lovely, entertaining, coming of age story of a young man trying to find his worth in a world quick to accuse and slander.If it hadn’t been for my admiration of the quality of productions Paul Woodson does, I would not have encountered any of Mr. Burroughs' works other than the famous Tarzan of the Apes, a fantasy, which I loved. I also found he has written many more books that are now in the public domain. Per chance this is your chance to be introduced to his work, if you aren't already.We read and listen to so many marvelous authors of our time. However, it is nice to be able to recount the marvels of past authors. Thank you, Paul Woodson, for giving me a few hours with an author who should not be forgotten with your talented narration of a touching and meaningful story.

I really enjoyed this story. The consistent character play narrated by Paul Woodson made it even more so. Consistent tempo and upbeat character development made this an exciting listen to the very end.
I was given this review copy in exchange for an unbiased review.

The Efficiency Expert by Edgar Rice Burroughs is a classic set in 1921 Chicago. Although it is not a fantasy like what Burroughs is most known for, the writing is excellent and the dialog between the characters is natural. While listening to this audio, I couldn't help but imagine watching an old Humphrey Bogart movie.

The story centers on a young gentleman, Jimmy Torrance, as he attempts to earn a living after graduating from college, jumping from job to job. Besides being strong and good looking, he is loyal and possesses a good moral compass. For example, Jimmy befriends and helps out a prostitute who wants to escape her current life and earn an honest wage. ,Jimmy also befriends a young upper class debutante, who introduces him to her father and the father ultimately hires him.

Paul Woodson did an excellent job narrating. He has a wonderful voice that differentiates between male and female characters. He was a joy to listen to and really enhanced my enjoyment of this audiobook. I received a copy of this audio in exchange for an honest review.

A Different Side of Burroughs

What did you love best about The Efficiency Expert?

I loved that this was an entirely new side of Burroughs that I didn't know existed. It's formulaic, and splendidly so. This is a book you can just sit back and enjoy the ride.

Paul Woodson does a great job with the narration. His enunciation is great, and he does accents and male/female voices believable. He has the right kind of voice for exploring the lesser known classics.

Obviously, it would have to be the hooker with the heart of gold. Who doesn't love their noir tropes?

I listened to the whole thing at work in a night, and I think it was better for it. This one took a good hour for me to start getting interested, so I'm glad I was able to get past the introduction to the main character because the rest of the book was great.

I received this book for free from audiobookblast in exchange for an honest review.

Paul Woodson narrates this version of Edgar Rice Burroughs story of a man looking for a job.Not much is available but it is possible that he could be an Efficiency Expert,whcih is someone who comes in and fixes things at companies to make it run smoother.With his gal pal helping,can he do it?It is a fun read.
I was given this book for free for an honest review.

Different from the Usual Burroughs

This is different from what I typically expect from Burroughs. It is a rags to riches urban tale of the author's time. It shows the athletic but not studious college graduate undergo many setbacks while he learns how to be a success in Chicago. Along the way he befriends a safe-cracker named Lizard and a well meaning prostitute named Little Eva. It is nice. It captures the time. Just don't expect a usual Burroughs adventure story.

Very good story of the influence of a good man.

Well Read! The narrator brought the characters to life. He took a period story and gave it fresh life. Well done!!!

Would you try another book from Edgar Rice Burroughs and/or Paul Woodson?

Probably not unless the blurb intrigues me.

Much too dramatic ... seemed more like an overly extended movie trailer than a book.

Not a huge fan of the story.