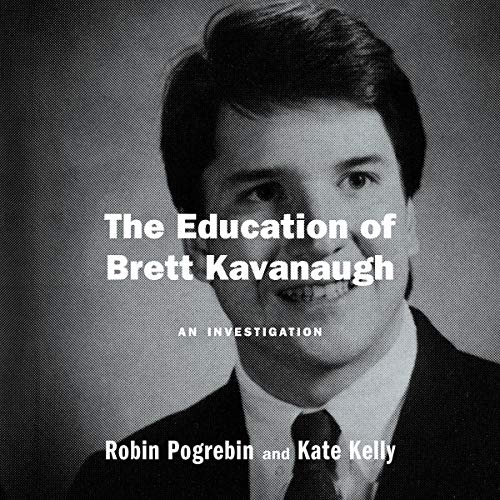 The Education of Brett Kavanaugh

"A remarkable work of slowed-down journalism...They are doing their jobs as journalists and writing the first draft of history." (Jill Filipovic, The Washington Post)

From two New York Times reporters, a deeper look at the formative years of Supreme Court Justice Brett Kavanaugh and his confirmation.

In September 2018, the FBI was given only a week to investigate allegations of sexual misconduct against Brett Kavanaugh, President Trump's Supreme Court nominee. But even as Kavanaugh was sworn in to his lifetime position, many questions remained unanswered, leaving millions of Americans unsettled.

During the Senate confirmation hearings that preceded the bureau's brief probe, New York Times reporters Robin Pogrebin and Kate Kelly broke critical stories about Kavanaugh's past, including the "Renate Alumni" yearbook story. They were inundated with tips from former classmates, friends, and associates that couldn't be fully investigated before the confirmation process closed. Now, their book fills in the blanks and explores the essential question: Who is Brett Kavanaugh?

The Education of Brett Kavanaugh paints a picture of the prep-school and Ivy-League worlds that formed our newest Supreme Court Justice. By offering commentary from key players from his confirmation process who haven't yet spoken publicly and pursuing lines of inquiry that were left hanging, it will be essential listening for anyone who wants to understand our political system and Kavanaugh's unexpectedly emblematic role in it.

What listeners say about The Education of Brett Kavanaugh

Not as good as I thought it would be. Not that much new that wasn’t already covered in public sources.

Good narration, interesting story. Paints a very full picture, traces many interpersonal connections I wasn't aware of. Draws out a thorough timeline of the many parties involved and made it easy to follow. Not an easy task!

The Past is the Present

This was informative and offered an opportunity to know more of who he is outside the public performer of political life. Kelli and Pogrebin did their research and wrote this in factual form, and not their opinions. It opens up so many ways in which Kavanaugh was expected to a Judge since birth. To prove his worth, to perform and not be who he may have been inside. Addiction seems obvious and yet has never been addressed throughout his constant display of symptoms. He was never even vetted for this. The only investigation was whether he was acting out sexually against girls, and young women who were not consenting. He had little respect/knowledge/empathy for how he affected others. It appeared he had never been taught many socialization skills. And in all his many obvious drunken episodes it is tragic that no parents, schools, colleges, offered him help. It was focus in the hearings and he was more defensive about his beer than the sexual abuse allegations. There were many witnesses, and character witnesses who had come forward to the FBI prior to the hearing and Trump did not allow a thorough investigation on them. That was a disservice to both the alleged victim and the alleged perpetrator. Excellent writing to make one ponder about how much has really changed when it comes to justice and the law.

A thorough account. I truly enjoyed listening to the writers go through this polarizing but incredibly important time of American history.

There is plenty in their reporting that is alternately heartbreaking and rage-inducing ... doesn’t seek clear answers so much as attempt to write the first iteration of this particular historical record ... Living in the minutiae, and maintaining that focus on narrating events rather than opining on or analyzing them, makes this book a remarkable work of slowed-down journalism ... the power in this book is the authors’ effort to use their journalistic tools to set the foundation for the reader to consider these bigger, broader questions. The authors try to wrap it up in a way that feels narrow and humble, not straying too far out of their professional lane. They are doing their jobs as journalists and writing the first draft of history. It is up to you, the book suggests, to get to work on the revision.

Just what is needed at this divided moment on such a divided subject.All he had to do was to tell the truth have it be a learning moment and admit his mistakes but instead they decided to run a train over a good woman telling the truth .He will carry his guilt for the rest of his life I have no doubt.Maybe it will help him be a better man .

Finally, a clear and thorough exploration of these pivotal events. Very well written and beautifully narrated by the authors. Read it!

Having watched the entire Kavanaugh hearings and Christine Blasey Ford's testimony, I wanted to listen to this well done and factual book without the feeding frenzy accusations by the media and partisan slants. I found the narration good and consistently understandable. Three issues lead to understanding why the accusations against Brett Kavanaugh are credible. First: The book illustrates that the drinking culture in prep school parties and fraternity parties on campus can be extreme and lead to behavior that would not be perpetrated if one was not under the influence of alcohol. The book also gives eye-witness accounts of Kavanaugh's heavy and stupifying drinking that indicate that under the influence, his alleged sexual assault behavior could be true. Secondly, listening to the full background of Christine Blasey Ford and actually hearing her testimony leads one to believe that she was extremely convincing and believable. She also had her alleged sexual assault experience in a time period when women did not discuss these things and in which sexual abuse and assault have been assumed to be the woman's fault, or a woman was shamed in the process of coming forward with allegations. Third, it is well known that partisan politics are "out of control" in Washington D.C. and whichever party is in control uses it power to push through whatever agenda it wishes, despites facts and testimony. Many facts show the FBI also did not do a thorough investigation, or interview all the witnesses who wanted to be heard and the nomination was pushed through. In the end, Brett Kavanaugh's punishment may be the allegations that will always cloud his name, as with Clarence Thomas.

Fascinating book, and I really appreciated how thoughtful and balanced the reporting seemed to be. The author managed to write a book about a pretty controversial topic without taking sides.

No justice for all