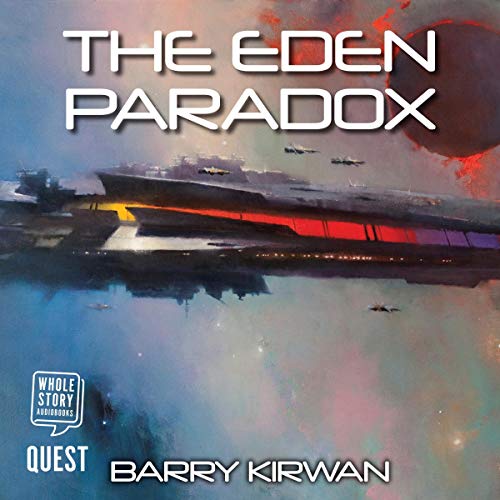 By: Barry Kirwan
Narrated by: Edward Mitchell
Try for $0.00

If you loved Dune, Foundation or Ender’s Game, you'll love the first novel in this epic, galaxy-spanning series.

In 2063, Earth's overheated climate and war-ravaged cities are near breaking point. A new habitable planet is discovered within reach, but the first two missions have failed to return.

This is the story of the third mission to Eden. What really awaits the crew of four as they make the long journey to this supposedly uninhabited virgin planet, and what is the link to the secret 900-year-old sect known as Alicians back on Earth?

While Blake leads the Eden mission, a young researcher named Micah discovers a terrible truth that threatens the very existence of humanity.

"The reader is pulled into an all too real future, with memorable characters, leaving the reader craving more." (Lydia Manx)

What listeners say about The Eden Paradox

My favourite book in Audio is amazing

The first book, while entertaining, is just a setup for the rest. I love it. If you are new to the series, do not give up. It gets better an better. As a non native English speaker, it took me some time to get used to the narrators accent, but after the first hour or so, it was all OK.

This book is uterly awful and completly unaudible.
I would not recomend this book to anyone and I enjoy this genre a lot.

Good clean fun, but not the best narration

Decent fun SF pulp. Engaging enough for me to seek out the sequels. But spoiled a little by the narrator flowing one scene straight into another without pausing for breath or providing any other audible cue. The audio equivalent of a book written without paragraph breaks.

The story sounded interesting, so I thought I'd try the audiobook and see. Sadly, the reality is a somewhat slow moving book, building towards a dramatic climax of nothingness. The back story, of a limited nuclear war, and how the human race got to that point, was a solid foundation that wasn't capitalised on. Also, the narrator, whilst very good, failed to breathe life into the story, and had me fighting to stay awake.

Loved it as a read, loved it being read to me !

Its been a while since I read the Eden Paradox, and now finding myself on endless car journeys, decided to take it again to be entertained, its always a gamble as to whether the story will hang together a second time when you know how it ends, and whether the portrayal by someone else of characters, that you have been to the ends of the earth with (quite literally over the other three brilliant books by Kirwan) will meet your expectations !

They did - characterisation and the pace of reading all worked... the story lost non of its punch and I was still rooting for Mica even so many years after reading the Eden paradox for he first time.

I don;t do superlatives, but if I did, I would use one or ten. I just really enjoyed the story - again - and I really enjoyed someone reading it to me. Just have to wait for book 2 now :)

Transports you to another world...

This is my first audible book, and I'm impressed by the way the narrator casts a spell, conjuring up a future Earth and the planet Eden. My favourite chapter was the Ghoster section, unputdownable, edge of your seat stuff.

I hate to criticise work that people have put time into, but this was very poor, both in terms of the story and the performance. The story was full of cliches - just another plucky humans fighting voracious bug eyed monsters tale. There were very few original ideas decanted into this well worn scenario. And there were far too many "with one bound, Jack was free" moments i.e. timers running down to the last few seconds, rescuers appearing when someone was seconds away from being devoured etc. Regarding the performance, while the speaking voices of the characters were well enough done, the narrative sections were read in a very pedestrian way.

I read the Eden series years ago, and was really excited to see in on Audible. Have really loved returning to the story world and characters.

Great book to listen to, but needed more space in the recording to discern between different perspectives/sections in a chapter... needed to reposted occasionally to work out when the story had moved on to a different scene.