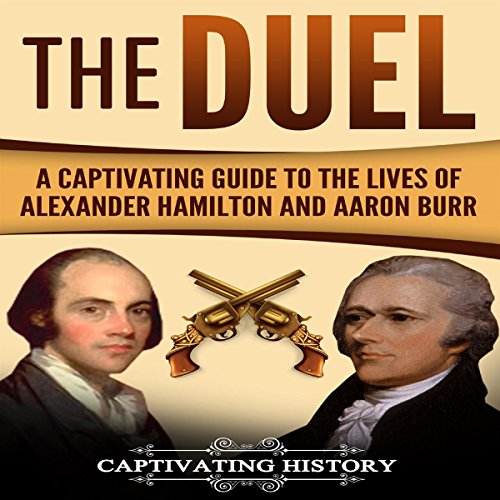 The Duel: A Captivating Guide to the Lives of Alexander Hamilton and Aaron Burr

The Duel: A Captivating Guide to the Lives of Alexander Hamilton and Aaron Burr

Two captivating titles in one audiobook:

Alexander Hamilton and Aaron Burr lived very similar lives. They were both orphaned at an early age. Both were excellent students who attended college and studied law. Both were young staff officers under General George Washington, and both became war heroes. They were both drawn to politics, and each served in the newly formed government of the United States. How was it then that these two men ended up in the most famous duel in American history?

The book overall was very informative about the lives of Alexander Hamilton and Aaron Burr. The book first talked about Hamilton from birth until death and then discussed Burr the same way. The only complaint that I have is when the book discussed the dual process. This area was talked about in the Hamilton portion and then regurgitated verbatim in the Burr portion. At first I thought I had accidentally "rewound" the audio book. This is my only complaint. Otherwise, I learned a lot about both men.

Fascinating history on the intersection of two players in the birth of the United States.

Recommend this book to all!! A little wordy at times for me but an excellent history of two very important men. I am a great fan of Hamilton, truly a hero of this country. It gives you hope for the future, faith in this amazing Nation!

Highly interesting book about one of the most interesting men in history. There has been an increase in Hamilton popularity recently but for anyone trying to learn more about the duel and Hamilton without the gimmicks this is definitely the book for you. I stayed up all night reading this book the day I got it. Honestly, one of the best books I've ever had.

Excellent description of the mores, the privileges and both the elitist education and skullduggery rife among the American first congressmen. It covers the subjection of women, the importance of birth, the scandals and the penury which ultimately led to speculation and fraud. It is someway a format repeating Plutarch's "Parallel Lives" presentation. Hamilton and Burr are the warring participants.

Nicely written, conveys a sense of the strange pattern that brought these two similar men together over the years. Both were brilliant and ambitious, their backgrounds could not have been more different, and the events surrounding the creation of the United States set them on paths that unerringly led to the fatal moment on Weehawken Heights.

A double biography of two Americans at the time of America becoming a union. It pursues both from their childhood homes and through their lives as participants in the early making of a country. It exposes their personalities and subsequent events that caused neither to back away from dueling to the death.

Absolutely riveting and teaches a LOT about character and choices!!!! And of course history. As an adult I LOVED it.

How much do you know about our founding fathers? The was a very interesting listening! The two men, their lives touched by similar events.

I found this a great history book for children. It talks about the parallel lives and why what happened, happened.

The books take off from the duel and follows Burr to his death many years later. Excellent references and firsthand account information with original letters. Very well written, and easy to digest and follow the thoughts of the author. Highly recommended listening to on early American History and the war between two men that ended in tragedy for both.

Here in this book the author explores how both men’s careers and interactions led up to the duel, then continues the biography of Burr till his death years later. Other famous “characters” include George Washington and Thomas Jefferson. This fascinating book is thoroughly researched from original sources, and many period letters are reproduced in it. Five stars.

This is a good duel biography indeed. You can get the history in a true manner by this author. It was a great fun as well while listening to this book. I recommend this audio book.

The author takes great pains to describe the circumstances of their births, political lives and deaths. It helps if you have an interest in American History and general understanding of the climate surrounding events associated with the American Revolution, as well as the key players shaping events.

A wonderful and well written book about a national rivalry that would eventually take a founding father with it. The story of alexander Hamilton and Aaron burr was recently brought back into the spot light with milk commercials. However, this rivalry was deep and very interesting. The book dives deep into that relationship and explains the history with great prose.

Very well written book with lots of fascinating and vivid details. A very insightful book but I was left wanting just a little more. Aaron Burr lived two decades after shooting Hamilton. I wanted to know more about his life after the shooting.

There are a lot of books about Hamilton, but this one deals only Burr a Hamilton as their lives intertwine. Highly recommended. Especially as an add on for those who are fans of the musical.

This is a book that serves as a thoughtful physiological portrait of two antagonists; Alexander Hamilton and Aaron Burr. As we all know, Hamilton's life ends one cold and misty summer morning on a bluff above the Hudson River.

This is a very enjoyable read about two men who were in many ways alike as they were different. Both left a mark on American history.

This book represented a tremendous loss for both men and their absence hurt the Republic. It is recommended reading and shares a lens with American History. Harry G. Farrow, Jr. former owner of The Harrington Journal, Harrington, DE