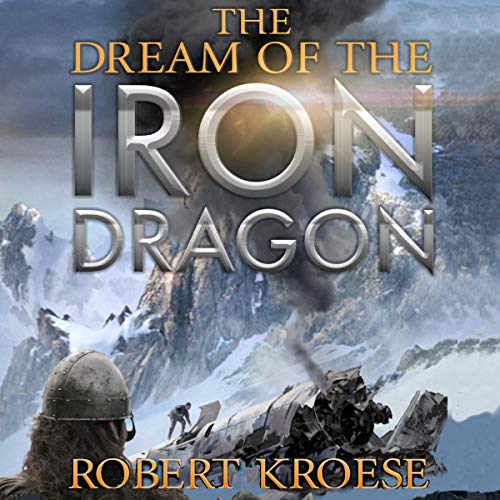 The Dream of the Iron Dragon

Trapped 1,300 years in the past, they have one mission: survive.

In the 23rd century, humanity has been hunted to the verge of extinction by an alien race. When an exploratory ship accidentally travels back in time to Viking-age Scandinavia, the human race is given a second chance. Pursued by the power-hungry King Harald, the four surviving crew members join a ragtag band of Vikings as they pillage their way across Europe. It will take all their ingenuity, courage, and technical know-how just to survive. But survival is only the beginning. To save humanity, they must somehow return to the stars.

Thus begins a decades-long effort to teach the Vikings to build a craft capable of reaching space - a ship that will come to be known as the Iron Dragon.

"Terrific storytelling, letter-perfect alternate-history, and the highest stakes for humanity imaginable combine to make this a thrilling start to an exciting new Viking saga. Kroese avoids both romanticizing and demonizing the Vikings, showing them to us in all their humanity, while spinning a tale that pulls no punches and leaves us gasping for more." (Lars Hedbor, author)

What listeners say about The Dream of the Iron Dragon

I'm a huge Kroese fan and have probably listened to Starship Grifters more than a dozen times, plus at least 10 others by him. This one lacks the humor and satire you might be used to but it is still highly enjoyable. JD does a great job narrating.

I can’t wait for more. This is going to be wonderful. Thank you for a wonderfully
fun book.

more of this series

The story is intriguing and exciting also, could the rest of the series be made available please.

Space battles, Aliens, Vikings, chemistry/physics...this book has it all! The narrator does a very good job without sounding like she is trying hard to differentiate male voices. The progression and logic behind the plot ideas are excellent. You will love the book. You will find yourself asking when this series will show up on the big screen. I’m now on the second book. Happy reading!

There were a few glitches in the recording, some repeated lines in one or two spots, but the guts of the story were strong. Not too slow anywhere, and it really gave you a boots-on-the-ground feel. A solid blend of future tech and Earth analog living.

As a former member of the United States armed forces I am embarrassed by the actions of the characters supposedly protraing military professionals.
I would suggest that the author at least talk to a former Marine before they attempt to write about one.
My last gripe is the BattleTech. A railgun should be able to engage targets out to sevral thousand meters, no grenade or Claymore equivalents on a military scout ship during a time of War.
I apologize if this sounds like nitpicking, however the Space Marine got his ass kicked buy a bunch of Bronze Age barbarians. instead of holding them at the bridge and killing them one by one with his sidearm.

Had to listen at x1.25 speed. No action or Vikings until 4 hours in. Could not finish. Poor execution of a decent plot.

No question, my finger hovered over the buy button many times and I thought, well if I don't like the book, I can always return it back to Audible.
This is really a great story with fantastic characters and a complex story line. The presentation is extremely well done as J.D. Ledford brings the story to life.
I can't wait until the third book makes it to Audible. Hurry it up please!

What a neat idea, humans from the future struggling to escape extinction and end up in Medieval Scandinavia! Much awesomeness ensues. I even got emotional at one point. Great stuff and look forward to the sequel. I had a hard time with some of the characters actions more than once, but am ready and willing to play along.

Vikings and Lost in Space... on Earth

Iron Dragon is fun and well-researched at the same time. My only gripe is that the set up for how and why our heroes are on their quest is a bit thin, but it's not a barrier to enjoying the story. It's not a standalone book though-- the end is a clear prelude.

Ledford's narration is excellent... with one grinding exception: nautical terms. She worked hard to manage old Norse words but totally dropped the ball on words like "coxswain," "gunwale" and "starboard." Being that a big chunk of the book involves traveling in boats, this is kind of a frustrating omission. Still, an easy listen overall.

If you trust my word just buy this Iron Dragon series and start reading now. If not, let me try to convince you. I was so excited to keep on after the first book, I did not give myself time to write a review before listening to the second book. I have now bought the third book, but want to write a review before going on. So I am suppressing the urge to hit play. It is hard, I feel I am making a sacrifice. That is how much I want you and everyone else to find this gem.

I feel like after finding “The lord of the rings” all this time ago, and the first book of Harry Potter. And I don´t want to say which book is best. They are all the best, along with this Iron dragon series. The lord of the rings gave us all a new and wonderous world to adore, just so epic, and pretty much the same with Harry Potter. I had stopped reading books at all when I was given the task to read the first Harry Potter book for children all this time ago. I feel it saved my soul, haven´t let go of books since then.

The Iron dragon is more based on the real world though, no magic. The magic of the story is a brilliant author and “it could have happened like this”. Which is why I want to write a review now, maybe not a sentence I can write after the final book. Also if the research of the story stands a closer look (how long it takes to sail between countries etc.), this story should be read in every history class everywhere. The story does bring study of gone times to life, and brings it closer. In a way where maybe more people would consider thinking of gone generations as something more than stone age people with no brain. Now that may not be something that excites you, but no worry. The Iron dragon will be suitable for readers of many genres. The story has endless fast paces action and surprises at every corner. It is flawlessly written and is a multi dimensional gem. A few times it had me so emotional I was crying. But most of the time it had me so engrossed there was no thought other than keeping on. At one time it though had me raving mad at the state of our societies. That even after the industrial revolution, where we have all this high tech, making machines that make our work force obsolete, we still exploit starving children on other continents. Write me a line if you don´t grasp what I am talking about. Ok, now I am mad again. But not about the story itself. The story is glorious! I am in love with the Iron Dragon series. It excites my imagination to no end, the story is so complex and magical, exciting and the action is engulfing and endless. I lack words to do these books justice. If you are not yet convinced to read the series, keep in mind life is dull with just one flavor in your mouth, would you eat just one kind of food till end of times? Spice and different flavors make life more fun. And this one has high chance of making your day.
For those of us that like to listen to our stories, the narrator is just perfect. Somehow, would not have thought so without trying it out.
And now to the final book. Hitting play.

This novel has an interesting concept and the use of three different periods in time was quite good.
However the author really needs a better grasp on history to write an alternative history novel. I can accept the characters mixing up history but the several references to the Vikings as a Bronze Age culture are unacceptable.
A good performance by the voice actor kept me listening.