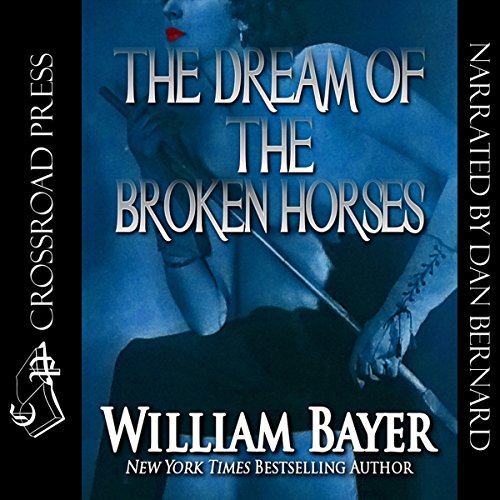 The Dream of the Broken Horses

The Dream of the Broken Horses

By: William Bayer
Narrated by: Dan Bernard
Free with a 30-day trial

A man and a woman are making love....

One hot summer afternoon a quarter century ago, a wealthy socialite and her young lover, a private school teacher, were gunned down in a cheap hotel room on the outskirts of the Midwestern city of Calista.

Now, forensic sketch artist David Weiss has returned to his hometown to cover a routine celebrity murder trial for ABC. For someone who has earned a reputation for cracking high-profile cases with his portraits of suspects based on eyewtiness accounts, chruning out courtroom sketches is merely pedestrian work. But Calista holds other attractions for David. First, there are the welcome attentions of CNN reporter Pam Wells. Then there's the notoriously unsolved double murder at the Flamingo Court motel that has haunted him since boyhood.

Like his psychoanalyst father before him, David becomes obsessed with one of the Flamingo victims, Barbara Fulraine - who was as fascinating as she was enigmatic - and with the bizarre circle of friends, gangsters, columnists, and lovers who surrounded her. David's father believed that if he could unlock Barbara's troubling, recurring nightmare - which she called "the dream of the broken horses" - his solution would mark a watershed in his career. Now David, armed with old news clippings and police interviews, as well as an extraordinary psychological case study of Mrs. Fulraine recently discovered among his deceased father's effects, seeks to use his highly honed professional skills to reassemble the face of her killer. But with each eyewitness interview and each fresh stroke of his pencil, David finds himself being hurled down a path of ever-darkening mystery, obsession and dread.

One of our most elegant and commanding writers of psycho-erotic suspense, William Bayer has crafted a riveting, sharp-edged psychological thriller, perhaps his finest, most compelling work to date.

What listeners say about The Dream of the Broken Horses

The symbolism of dreams is examined ad nauseum here, and the characters are a little odd, but on the whole, worth finishing.

Dan Bernard does a great job bringing this fascinating novel to life. The story is complex, even serpentine, with numerous characters. Bernard makes it work. For lovers of psychological crime fiction at its best, this audio is highly recommended recommended.

Events from one’s childhood play apart of when adult. He was a child 26 years ago when the murder happened. He knew the victims, childhood friends and a teacher. He would like to solve, as he digs will he find it can not be. That it may always be a mystery to him. Given audio for my voluntary review. The narration by Dan added to the story.