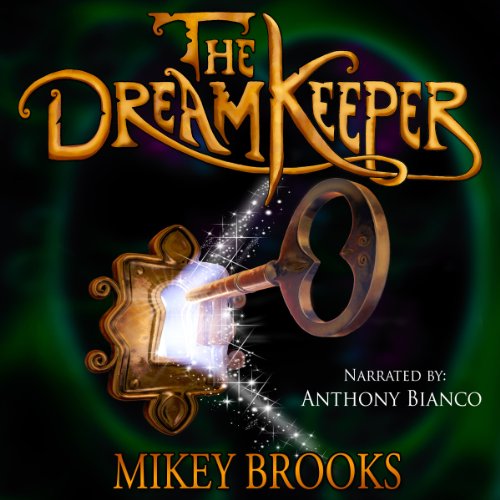 By: Mikey Brooks
Narrated by: Anthony Bianco
Try for $0.00

Dreams: Dorothy called it Oz, Alice called it Wonderland, but Nightmares call it HOME. When an evil shifter takes over the gateway to the realm of Dreams, it falls to 14-year-olds Parker and Kaelyn to stop him. Their only hope lies with Gladamyr, the Dream Keeper, but can they trust a Nightmare to save their world? The Dream Keeper is an upper middle-grade fantasy-adventure that will keep you turning the pages.

What listeners say about The Dream Keeper

My family listened to this book while driving on a cross country trip. It (and the sequel also) kept us entertained for many hours. My children's ages are 4, 5, 9, and 11. They all loved the book and so did my husband and I. The characters are believable because they have real problems and act appropriately for their age. Sometimes authors make their characters act too old, but Mikey Brooks doesn't do that. He did a great job of making you relate with the characters.

Anthony Bianco brought the story to life with his narration and different character voices. Some narrators tend to read too slow, but The Dream Keeper moved at an optimal pace.

What a romping story

What made the experience of listening to The Dream Keeper the most enjoyable?

Lots of action, great narrator, and a little romance.

Gladamyr--I love what he had overcome and continued to battle.

Which character – as performed by Anthony Bianco – was your favorite?

Gladamyr--loved his hint of an accent.

I listened to the audiobook and really enjoyed it. I think the reader did a great job, especially with the accents.

Somehow, I had it in my mind that it was middle grade, so it was a little surprising when there was kissing, but I'm all for kissing so I was good with it. The kids were entertaining, and I loved the message of the story. The world was interesting and creative, with the bad guys being really creepy.

I don't like it when authors don't use the perfect tense (using the word had to identify that they're talking about something that happened in the past). I see a lot of it anymore and it can be confusing. It's makes the grammar Nazi in me twitch.

I enjoyed the characters a lot. Gladamyr, the mare who doesn't want to be one, is my hero. Kaelyn's aunt has me confused. I didn't know whether to like her or want to smack her silly when she and Gladamyr's girlfriend started a stereotypical cat fight. Robert Jordan did a lot of that with his female characters in the Wheel of Time series, and it bugged me then too.

Warning--the book has good resolution but then ends with a last-minute cliffhanger.

Look Out! Nightmares in Sight with This One! :)

I listened to The Dream Keeper in the audio format and absolutely loved it! I thought the narrators did an outstanding job of bringing each character to life in a way that was easy to tell which was which as the scenes progressed. One character, Gladimere, for example, had an endearing British accent. It almost reminded me of an old time radio theater production.

The story starts out a bit slow with the introduction of the world of Kaylin and Parker, two middle graders struggling to fit in. After the introductions, the story starts gaining momentum that doesn't stop as we are introduced to a world we all visit daily, Dreams. The author has a vivid imagination and used many terms, like Mares for example, as characters or places in the tale, giving a fantastical meaning to what we all take for granted when we sleep. How many fantasy adventures have you read where you have to take a nap to enter the new world??? Awesome!

Fun for Kids or the whole family

This is the sort of book middle graders can enjoy under the covers at night or with Mom and Dad on a road trip or just at home. There is adventure, action, and excitement. Parents know it is a safe exciting read.

I couldnt put it down

Which character – as performed by Anthony Bianco – was your favorite?

When kayen and parker solidify their friendship that was amazing

Beautiful and well written, never a dull moment. Mikey does a excellent job grasping the imagination, and Anthony does a fantastic job narrating. A must read for fantasy lovers.

If you could sum up The Dream Keeper in three words, what would they be?

What other book might you compare The Dream Keeper to and why?

Harry Potter because it was directed towards young teens

Have you listened to any of Anthony Bianco’s other performances before? How does this one compare?

It made me laugh