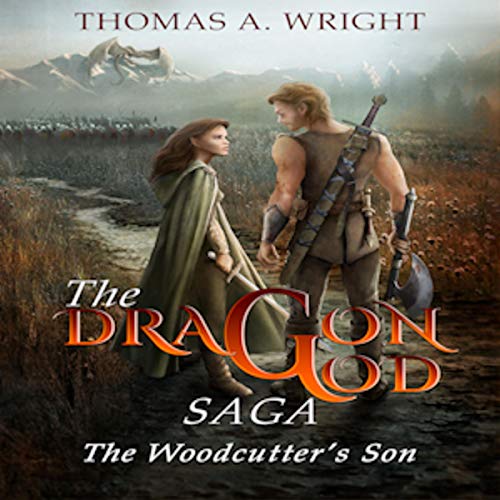 By: Thomas Wright
Narrated by: Guy Williams
Try for $0.00

Magic is waning. The ancient dragons of Torinth that once darkened the sky with their numbers are all but extinct. Older than even the dragons, the elementals, spirits of earth, sky, water, and fire, have slumbered for millennia, leaving the races of Torinth to fend for themselves.

The Kingdom of Northern Wastes feels not only the loss of magic but a foreboding change in seasons - winter grows longer with each passing season. The queen has set her eye on the south and the bounty of a fertile land.

In the Southlands, Morgan, the third son of a lumber merchant, expects nothing from his future but hard work felling trees and chopping firewood. His property borders land belonging to the elven Kingdom of the Black Mountains, where Alexis, the third princess to the elven throne, is ranger. Alexis joined the rangers with hopes of forgetting the royal court, her family and a betrothal in which she had no say. Fascinated by the woodcutter’s son, she traverses the border between their properties, knowing they could never meet.

Now an elemental has awoken, and set her sights on these two figures. In a time of uneasy kingdoms and threats of a pending war, she reaches out to Alexis and Morgan and arranges a conversation that will change the future of all of Torinth.

What listeners say about The Dragon God Saga: The Wood Cutter's Son

Lately, I have really struggled to find another book and author to enjoy. Having returned several they were so bad. Especially one that is in tune with the narrator. Well my search has ended for now I have discovered Thomas Wright. Evidently, Wright is an established author with several well known titles to his name of which I will purchase next, but just not to me. I loved this book. the pace is perfect and the characters are well developed and complex but not to the point of over kill. The world is simple but varied enough to be interesting. Magic is spot on and world building excellent. If that was not enough I have found my new favorite narrator in Guy Williams. Absolutely fantastic is all need be said but I will expand my thoughts a little, perfect timing, believable gender and race differences and accents and amazing vocal range. Don't miss a chance to be thoroughly entertained. Buy this audio book.

The characters' words sound stilted and far too sophisticated for the role the characters play in the story. And they all sound the same. The narrator speaks in a monotone and way too slowly; speeding up the playback 25% helps.

I returned the book.

Well rounded story, Not over the top. Just right.

The Main Characters, they have good chemistry. And how they take and grow into the roles written makes is a lovely read/listen. I'm happy to say money well spent in getting this book/audible.

this is one of those books you don't come across very often, a hidden treasure. I wish there was more

You will fall in love with this book like I did!!

I love the story and all the characters and didn't want to reach the end of the book. I cant wait for the next book so I can continue the story. The only draw back I had for me is the narrator does not do girls voices well and they all sound like growly men, but for me i just pretend that women elf's sound like growly men, and who knows maybe the do. I am anxiously waiting for the next adventure for these characters that I fell in love with.

I enjoyed this book enough to hear the next in the series. the last part of the book was rushed.

Lots of good things in this book, mid chapter perspective shifts are not one of them. it makes skipping the clunky mustachio twirling villain harder to skip past

the story is pretty decent but the narrator I find is a bit lacking. I have enjoyed other books quite thoroughly narrated by him but I feel his performance in this book wasn't as good as others. though I feel I have been spoiled by too many Tim Gerald Reynolds narrations now.

The narrator was not very good. It was difficult to get into the story at first, but after concentrating on the the content I discovered it was a pretty good story. For me it felt like it just droned on and several times I had to rewind it because I found myself tuning out.