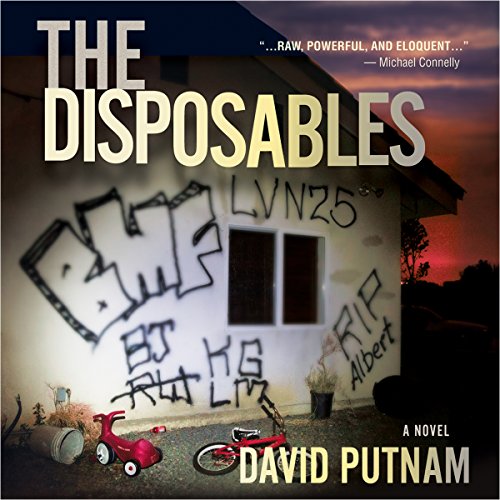 By: David Putnam
Narrated by: Branden Mckenzie
Try for $0.00

Bruno Johnson, a tough street cop, member of the elite violent-crime task force, feared by the bad guys, admired by the good, finds his life derailed when a personal tragedy forces him to break the law. Now he's an ex-con, and his life on parole is not going well. He is hassled by the police at every opportunity, and, to make matters even more difficult, his former partner, Robby Wicks, now a high-ranking detective, bullies him into helping solve a high profile crime...unofficially, of course.

Meanwhile Bruno's girlfriend, Marie, brings out the good, real Bruno, and even though they veer totally outside the law, he and Marie dedicate themselves to saving abused children and creating a type of underground railroad for neglected kids at risk - disposable kids.

What they must do is perilous as they take matters into their own hands, battling a warped justice system and Bruno's former partner, who has his own evil agenda.

What listeners say about The Disposables

Good, inventive story. But the narration is woeful. Just a few examples: Canopies for canapés? Cah-John for Cajon? Diminitive for diminutive? Wasn’t anyone in charge listening? It really took away from the listening experience.

The book is well written. I started the series with book one. Therefore, the author is setting up the series in this volume. Bruno was a police officer and member of an elite task force. He broke the law and ended up in prison. The story is about his attempt to get his life into shape after being released from prison. But he seems to be getting himself deeper into trouble. He has his cop skills and instinct but now also has street smarts. The pace is fast and the story is realistic. The characters are interesting. The setting is South Central Los Angeles, California. The book is hard to put down. I am looking forward to the next book.

The book was eight hours and fifteen minutes. Branden McKenzie does a good job narrating the book. McKenzie is a voice actor.