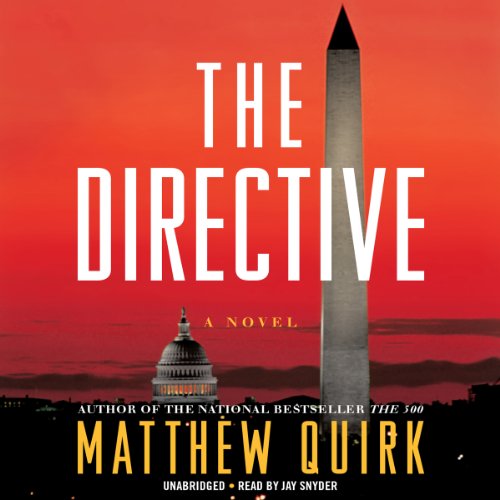 By: Matthew Quirk
Narrated by: Jay Snyder
Free with a 30-day trial

Two brothers, millions of dollars - and the heist of a lifetime.

After escaping the corrupt back rooms of Washington, DC, Mike Ford is again playing a dangerous game - this time the stakes are even higher.

Mike's brother is in over his head in a powerful conspiracy to steal a secret worth billions of dollars from the little-known but unbelievably influential trading desk at the Federal Reserve Bank of New York. In an effort to help, Mike soon finds himself trapped by the dangerous men in charge - and forced to call on all the skills of his criminal past in order to escape.

In this sharp, pulse-pounding sequel to The 500, Mike Ford again stars as the cunning and courageous ex-con man with a big heart, and Matthew Quirk confirms that he is one of the most exciting thriller writers at work today.

What listeners say about The Directive

Gimmicky and in inspired

Would you try another book from Matthew Quirk and/or Jay Snyder?

Jay was ok. I think he was hampered by the material.

Has The Directive turned you off from other books in this genre?

Not at all, this was just a mediocre addition.

Ambivalence. By the time I was three quarters if they way through, I realized that I didn't care how it ended.

After listening to The 500, (a decent debut) I expected better than this.

amazing ability to Weaver a good story line right up to the end. loved it,!! fun read.

Solid story... worth a listen

Good story, worth the listen and good escape. A couple of double crosses were tough to follow, but it's fiction! Don't overthink it and just allow yourself to fall into the story! 😊