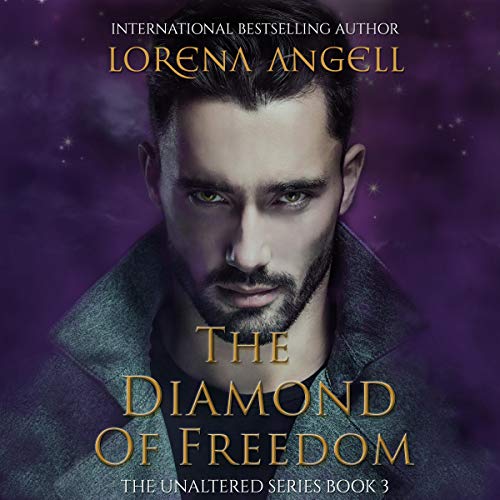 The Diamond of Freedom

By: Lorena Angell
Narrated by: Maria Marquis
Try for $0.00

The Diamond of Freedom, book three in The Unaltered series, melds together history, geology, metaphysics, science, and fantasy in this non-stop nail biter. Calli and Chris race against the clock to identify the power-neutralizing stone that prevents Calli from healing her life-threatening injuries. She must also learn how to counter its effects before she can fight against the rogue Diamond Bearer named Freedom to save the boy she loves and the world of her friends.

In the epic battle between extreme cosmic-power holders, weaknesses are exploited and lifetime relationships shattered to gain the upper-hand. Sometimes having no special abilities is what makes someone the most powerful. General Harding, Chris's father, has made it his life's mission to eradicate all people with powers. Believing the lies fed to him, and misusing his status with the US government, General Harding nears completion of a weapon designed to destroy cosmic-energy individuals.

Calli meets Brand Safferson's half-sister, self-named Deus Ex, who is a proclaimed mercenary. Her repeating abilities are necessary to rescue Brand from General Harding's compound, but the risks of recruiting her to abandon Freedom's side and join Maetha's may be deadly.

Maetha provides proof that she's figured out how to heal the DNA of an altered human, creating an Unaltered individual.

A number-one best seller in 11 countries, with over 225,000 downloads, the Unaltered series' readers have shown their love with more than 1,200 5-star reviews. The tale woven is one that feels ensconced in today's world alongside a huge dose of superpowers. This audiobook is currently being optioned for film and television, so don't miss your chance to discover this exciting series before it hits the screen.

What listeners say about The Diamond of Freedom

Once you get started you want to read the whole series in one sitting. Holds your interest. Good for mature young readers. Even though it is fiction, it has a lot of good lessons about human nature. Lorena Angell wrote a great series with The Unaltered series. I strongly recommend that you read this book!

Okay, so the first book was pretty good, second one not so great and so I thought I would take a chance that the 3rd book would be better. I ended up stopping in the middle because I was sooooo pissed off!! I even read a lot of reviews before but not one person hinted at him cheating on her!! Ok, so what's her name had him in mind control and she even took out all his emotions but come on!!! I'm so angry right now! I haven't read the end but they way they were talking that he could remember everything he did with the chiefs daughter and despises himself now that that "witch" (can't remember her name) gave him his memories and emotions back. You know what yes, this has spoilers in this review but I wish someone would have mentioned this in any review I read b4 reading this book because I would have NEVER spent my money. So, there's no cussing or sex but they sure lead you knowing what he did as she watched him do it. So heartbreaking. Anyway, this review is for people like me that detest cheating!!