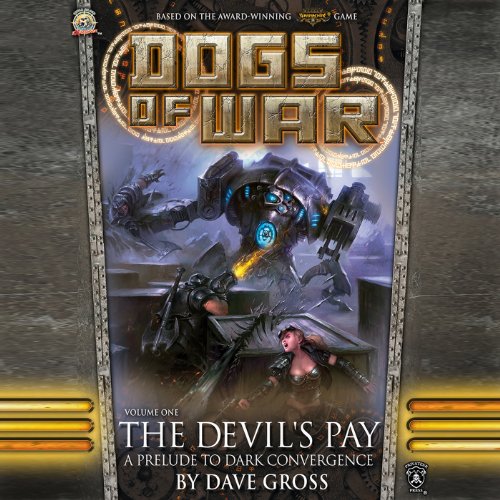 Samantha "Sam" MacHorne and her Devil Dogs need a contract, and when one comes in that leads to the haunted Wythmoor Forest, the company moves out with warjacks and slug guns at the ready.... Sam and the Devil Dogs may be relaxing in Tarna, but it’s not by choice - they’d rather be employed than resting up. When a dangerous job offer comes from "the old man", Sam takes the Devil Dogs and their newest recruit, Dawson, on a perilous hunt to capture an unidentified warjack before their rival Steelheads or the horrific Cryx make a claim on the never-before-seen technology.

Whether their mission will be worth the risk remains to be seen, but one thing is clear: Sam and the Devil Dogs will do whatever it takes to bring home The Devil’s Pay. A novella of the Iron Kingdoms.

What listeners say about The Devil's Pay

The story in this book continues in "Dark Convergence" by the same author, though with different characters being focused on. I listened to them out of order and that was okay because of how the incidents are only tangentially related.

I enjoyed the book, though some of Steve Baker's pronunciations are odd. The story is reminiscent of reading a pulp story when considering the length and pace of the story. I'm looking forward to reading more of the books.

Bark as big as their bite

If you could sum up The Devil's Pay in three words, what would they be?

What other book might you compare The Devil's Pay to and why?

Into the Storm. Because the Devil Dogs act just like the Malcentents... Just with a few more ladies.

Which character – as performed by Steve Baker – was your favorite?

Dawson was a good character to see the Dog's interaction with eachother, and he and Sam seemed to have sparks of chemistry. Sam is an interesting leader: one time being a caring older sister, the other being a no nonsense leader.

The Dogs of War will Howl.

My only wish is that they continued to story in the next volume.

Nothing truly outstanding, and probably a little impenetrable for people not invested in the setting, but thoroughly enjoyable for those who already are. a short prequel to the Nemo vs. Aurora story

I liked how each of the characters have personalities that are completly different, yet moulds together so well.

What made the experience of listening to The Devil's Pay the most enjoyable?

I really enjoyed the narrator's pacing in this audio-book. There's a great sense of emphasis in the right places. There is some witty banter in this book and the narrator hits the timing really well.

There's a lot of Iron Kingdom's books out now. One thing I've learned: The smaller the story, the better the book. Correia's "Storm" books, about inconsequential grunts, tell compelling tales; while the books about more important characters, such as Caine and Butcher, feel often inclined to worry about the world and setting. Dave Gross gets some of the Iron Kingdom's B-listers (or C-listers) in Sam MacHorne and her Devil Dogs, a group of down on their luck mercenaries when a big contract comes in. We follow Dawson, a new recruit, learning the ropes. Luckily he's not altogether generic and his interests in the rest of the group allow secondary characters to really shine. Gross uses Dawson to explore Sam, the Dog's creation under her guidance, why they hate the Khadorans, and the role religion plays in some of the men.

There's no big overarching story here. Yes, some of this plays into the creation into the cult of Cryssis, but the story presented here is really just about Dawson, Smooth, Sam, and some others. Gross gives us a good reason to like these guys, even some of the more undesireable ones.

The action scenes are fast and differ from each-other just enough that they keep your attention. They also give things for Dawson to do to allow him to become more developed.

Would you listen to another book narrated by Steve Baker?

Steve is pretty good. I wouldn't necessarily seek him out, but if I saw him narrate another book I'd probably give that book a second look.

It's not a real emotional story...

If you like the Iron Kingdoms I think this is one of the better Skull Island books available.