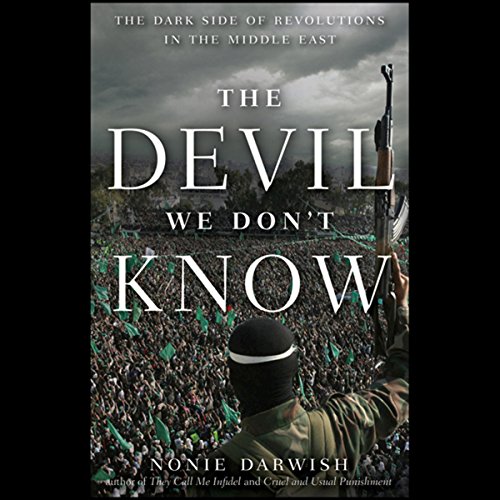 The Devil We Don't Know

By: Nonie Darwish
Narrated by: Gigi Falkland
Try for $0.00

The recent powerful wave of Middle East uprisings has fueled both hope and trepidation in the region and around the world as the ultimate fate - and fallout - of the Arab Spring continue to hang in the balance. Born and raised as a Muslim in Egypt and now living in the United States, Nonie Darwish brings an informed perspective to this carefully considered assessment of the potential outcome of the revolutions in the Middle East. This thought-provoking book will add to the ongoing debate on what the future holds for the people and the politics of the region and on the ultimate compatibility of freedom and democracy in the Muslim world.

What listeners say about The Devil We Don't Know

Good to Learn from Former Adherent

A thoroughly researched and straight-forward introduction for anyone who wants to advocate for truth and reason. Will not disappoint.

What disappointed you about The Devil We Don't Know?

There is no constructed reasoning in this book. From the verry begining it is made of an accumulation of unverrified "facts" and dogmas. The author is agressive and resentfull and expresses her own opinion without constructing her case. I'm verry disapointed by this book, it is a simplistic and narrow minded view of the arab world.

Would you listen to another book narrated by Gigi Falkland?

Yes, naration is not the issue here.

Would you try another book from Nonie Darwish and/or Gigi Falkland?

very inaccurate, Islam and Quran specific very large volume, and it takes years to understand, she is cashing in , thinking the western audience would like to hear her trash one of the world growing religion 1.64 B around the world
sorry that you did not check for accuracy

Would you ever listen to anything by Nonie Darwish again?

If you could play editor, what scene or scenes would you have cut from The Devil We Don't Know?

all of it false, even the fact she try to state, no one can say for sure if the people she mentioned left the religion