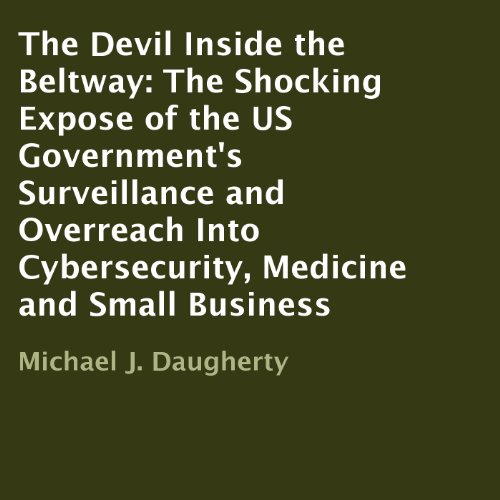 The Devil Inside the Beltway

By: Michael J. Daugherty
Narrated by: Clay Teunis
Try for $0.00

Small business owner Michael J. Daugherty is fighting back against US Government's sinister surveillance tactics in his audiobook, The Devil Inside the Beltway: The Shocking Expose of the US Government's Surveillance and Overreach into Cybersecurity, Medicine, and Small Business. During the past decade the US Government has teamed with private enterprise and academia to attack American small business by surveilling networks and picking up Americans' files they considered to be "shared" and "vulnerable."

They used that information to expand and grow more than one government agency. Michael J. Daugherty, the small business owner who created LabMD, a cancer detection center in Atlanta, Georgia, became a victim of these governmental practices. What began with the unauthorized but government-funded procurement of medical data for 9000+ patients from his medical laboratory turned into a government supported, financially draining, extortion attempt.

Taking you inside his five-year journey of government power grabs and intimidation tactics, Daugherty backs his riveting true story with engaging detail, including Congressional testimony, press releases, e-mails, letters and FOIA documents. But for the fact that everything in the audiobook really happened, it's like a brilliant political thriller. The cronies, lawyers, politicians and bullies...they are all right here in this stinging indictment.

What listeners say about The Devil Inside the Beltway

One of the most frustrating books I have heard

I sincerely hope that Mr. Daugherty listened to the performance of this book and for his sake that the tone was an accurate representation of his words. If not, Mr. Teunis did him a great disservice, as by the time the book was over I had begun to think I had never heard such a self-righteous, arrogant and contrary human being as I had just been subjected to.

Having said that there were some decent points in this book and as an IT professional I can see where some of the challenges Mr. Daugherty faced could be helpful to others before they are put in a similar situation. There are some good reminders about how important policy adherence and process adherence is, and also some decent background on how not to respond if you ever get a similar letter from the FTC.

Still, misbehavior or even flat out CYA on the part of the FTC notwithstanding, with each chapter I kept thinking how short-sightedness, and an arrogance that is unmatched by any I have seen before, brought about most of the problems Mr. Daugherty faced once the "incident" occurred. Time after time he responded to what seemed not unreasonable requests with stubborn obstructive behavior that probably cost him and his company thousands of dollars and years of unnecessary suffering.

I do understand the underlying point Mr. Daugherty was trying to make regarding the "right" of anyone to access another's data under any circumstance's and in a perfect world his argument would be valid. But in a world subject to real evil players it was an unrealistic and naïve outlook to think the security experts who exposed the file were the only folks who had the technology or the incentive to go looking for unsecured networks and confidential files. Had they not exposed the threat when they did who knows when or if the unsecured workstation would have ever been discovered by the company and the untold damage that might have been done by the bad guys once the "pot of gold" was discovered and was available for mining.

In the end I certainly came away from the book thinking Mr. Daugherty was much more concerned with his business and his pride than he ever was with his customer data or the possible harm that he might have facilitated by not acting on the data loss immediately and notifying his customers.

How the FTC broke laws and harassed a company trying to end cancer. Government punishes the victim not the criminal that hacked patients records using malware.

And it is as deep a rabbit hole we have imagined

An amazingly profound look at how our government agencies are power hungry, vengefull and parasitic.
Well written and kept my attention. God bless those willing to fight the good fight against the leviathan.

A must read for every patriotic American. A real page turner....unfortunately about our government destroying lives and businesses.