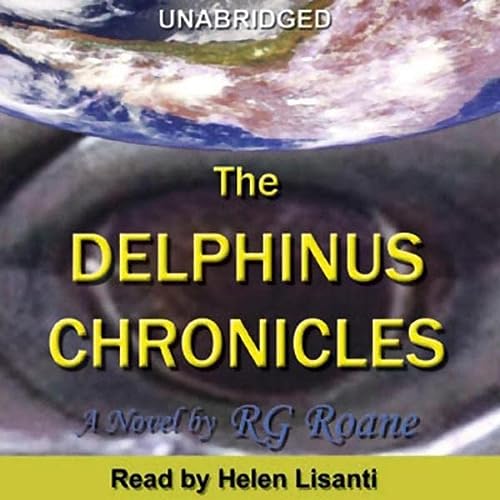 Students at a small college in Southern California program their supercomputer to learn language, but the school is adjacent to an aquatic amusement park and the computer mistakenly learns to communicate with the world's dolphin population. The dolphins ultimately reveal explosive information about the true origins of mankind, which falls into the wrong hands and sets off a chain of events that threatens to unravel society as we know it.
©1998 Richard G. Roane (P)2003 Cherry Hill Publishing
Suspense Technothrillers Adventure
Show more Show less

"You want to rush to the end to see what happens, yet find yourself slowing down to savor the artful storytelling." (San Diego Daily Transcript)

What listeners say about The Delphinus Chronicles

I was intregued by the idea of the book, but dissapointed by the execution. I expect that a writer should have at least a passing understanding of Dolphin Biology and history, and enough computer knowledge to avoid simple input / output / operation errors and incosistencies.

Plot and character development were weak, to the point that I had to check if I was listening the abridged version. Listening to the narrator proved a challange, as well. While her voice and Brittish accent were delightful, and would have worked perfectly with a Dianna Gabeldon or Patrick O'Brian novel, the accent just did not fit with a story staged primarily in Southern California.

A good idea that could have been a great book with a little more research, and more thorough plot development.

The story was interesting, but the narration awful. It sounded like someone reading a fairystory for children, and I couldn't help wondering why everybody seemed to have either a welsh or cockney accent. The music and sound effect wiped out the narration in places. Can't understand the choice of Narrator.

1. the plot is an an insult to the intelligence...
2. the sound effects both overpower and detract from the narrative....
3. wish I could get a refund...
4. the worst audiobook so far... the only plus was that it taught me to be more selective in my future downloads...

I picked this one up based on the story blurb. What a horrible, horrible narration. A british narrator narrating an american novel? Eekk.. Sound effects worse than any video game? Double eeek... I could not stand to listen to this one more than fifteen minutes. It grated on my ears.... Listen to the sample first. If you can stand it, then buy...

I can't really review this book since the narrator has made it impossible to finish.

The narrator's attempts at various voices leaves sections of the book totally incomprehensible. She varies between digitally distorted voices and extremely poor attempts at accents/voices which are even more distorted.

The story sounds interesting, but I can not follow the story line since I can not understand significant portions of the narration of this story.

Interesting concept, unbelievable plot, much less than thrilling..Glad i listened bc i love communication between animals.

What would have made The Delphinus Chronicles better?

The plot is interesting. There are some places where what happens is more implied than explicit and the listener is left wondering what really happened.

Who would you have cast as narrator instead of Helen Lisanti?

What character would you cut from The Delphinus Chronicles?

Not so much a character that I would cut, but the very first scene doesn't seem to fit.

The story is pretty interesting, but the production made the story difficult to hear, the British (and Scottish and cockney) accent of the reader trying to portray a Southern California culture is jarring to the ear. The sound effects interspersed through the production are overly loud and completely unnecessary. The dolphin "speech" frequently sounds like a flock of geese. None of these sound effects add anything to the production and frequently detract. Instead of listening to the book, borrow it from your local library and read it.

...but can't remember how it ended...it was ok, just not great and not memorable.