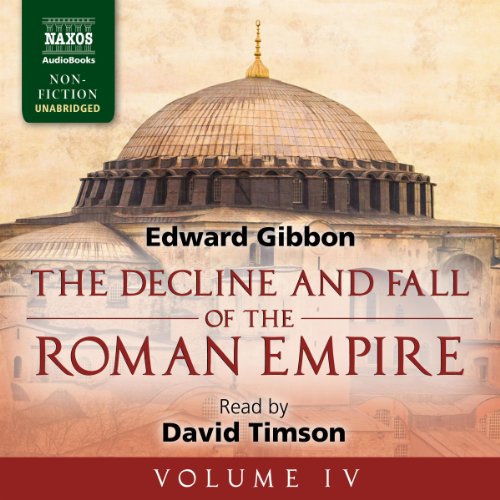 The Decline and Fall of the Roman Empire, Volume IV

By: Edward Gibbon
Narrated by: David Timson
Try for $0.00

The Decline and Fall of the Roman Empire has always maintained its initial appeal to both the general public and scholars alike. Its sheer scale is daunting, encompassing over a millennium of history, covering not merely the Western Empire from the days of the early emperors to its extinction in AD 476, but also the Eastern Empire, which lasted for another thousand years until the Turks vanquished it in 1453. But Gibbon’s style, part historical fact and part literature, is enticing, and the sheer honesty of the man, who endeavors to be scrupulously impartial in his presentation, endears him to the listener. In this recording, David Timson incorporates the most salient of Gibbon’s footnotes.

In Volume IV (Chapters XXXVII–XLVI), Gibbon explores the state of the Roman provinces after the dissolution of the Western Empire, and examines the reasons for its fall - not excluding its ‘immoderate greatness’. He then moves to the Empire in the East and its rule under Justinian (527-565), whose formidable leadership saw the re-fortification of Constantinople and the frontiers of the Eastern Empire. However, dangerous times remain ahead as the Persians make attempts to siege Constantinople. Gibbon ends with the state of the Eastern Empire in the sixth century and its weaknesses after a long war.

What listeners say about The Decline and Fall of the Roman Empire, Volume IV

Expand Your Vocabulary in Just 146 hours

Since all six volumes are of a piece I am reviewing it as such. This is a massive work and I will not attempt to extol all its virtues here. I have always had this on my reading list but knew that I would never devote months of reading time to tackling this history. This is a prime example of the superiority of the audio format in facilitating the assimilation of such lengthy books.

Here are my general impressions:

History is primarily an account of the leaders and ruling class. The vast unwashed masses pass through the halls of recorded history in abject silence.

The Roman Empire persisted for a very long time in many different forms. It is beyond my attention span to try to hold the entire span in my head. I admire Edward Gibbon for his ability to seemingly relate all these different eras with equal perspicuity. I will require a second pass through to more fully grasp

The influence of Christianity is the primary cause for the decline of the Roman Empire. One cannot hope to understand the underlying causes of the Roman Empire’s downfall without having a firm grasp of the doctrinal battles within the church. In order to make his reasoning clear to the listener Gibbon is careful to explain the fine points of Christian doctrine. He expounds, at length, the Arian heresy and its political implications. And, in a related episode, he relates the origins and expanse of the Mohammadan religion because of its impact on the Romans.

This is not merely a narrative history. Gibbon writes with high style and great aplomb. His humor is witty and droll and quite pervasive. The byzantine convolutions of this history are made beautiful by his flowing prose. This is a work of literature.

Either the common vocabulary of people in the eighteenth century was higher than that of people today or Gibbon has an incredible mastery of the English language, uncommon in any time. I prefer the latter.

David Timson has a wonderful sonorous voice; one quite suitable to hours of critical listening. His enunciation is crisp and his inflection perfectly suited to delivering Gibbon’s frequent backhanded compliments.

A classic, an interesting historical perspective

the most interesting thing about Gibbons' classic is how history was recounted in his time. I enjoyed the florid language and quaintly non-PC depictions.

writing style is too "verbose" & "showing off "

not getting to the point & too verbose

What was most disappointing about Edward Gibbon’s story?

eh...not if Gibbon produced it

too long & over rated