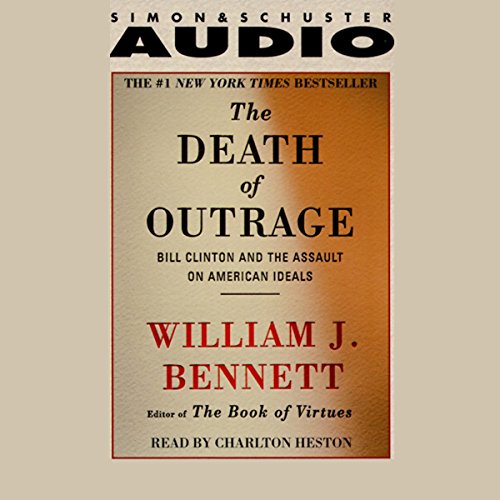 The Death of Outrage

By: William J. Bennett
Narrated by: Charlton Heston
Try for $0.00

Today we see little public outrage about Bill Clinton's misconduct. With enormous skill, the president and his advisors have constructed a defensive wall built of bricks left over from Watergate: diversion, half-truth, equivocation, and sophistry. It is a wall that has remained unbreached. Until now.

In The Death of Outrage, former cabinet secretary and bestselling author William J. Bennett dismantles the president's defenses, brick by evasive brick, and analyzes the meaning of the Clinton scandals: why they matter, what the public reaction to them means, and the social and political damage they have already inflicted on America. The Death of Outrage explains:

Explosive and hard-hitting, The Death of Outrage is directed at a shameful chapter of American history. It is an urgent call for American citizens to repudiate the deep corruption of Bill Clinton, and the corrupting arguments made in his defense.

What listeners say about The Death of Outrage

A lesson from history

What made the experience of listening to The Death of Outrage the most enjoyable?

Just hearing the voice of the late Charlton Heston is a pleasure. It is the best audio recording I have ever heard. I owned it on abridged cassette in 1998, and jumped for joy when I discovered I could purchase it unabridged via my kindle.

What was one of the most memorable moments of The Death of Outrage?

When Bennett makes the argument that the First Lady was just as irresponsible as the President and probably enabled his cheating on her.

Have you listened to any of Charlton Heston’s other performances before? How does this one compare?

I'm embarrassed to say that I never have, but I will look into it. He had the ideal elocution.

The hypocrisy of the media and the Democratic Party. I voted for Bill Clinton, but his behavior was inexcusable. If a Republican President had done this (even with a strong economy) he would have been shown the door long before the impeachment process. Now that George Bush has wrecked the country to a greater extent than his father did, Clinton's flagrant adultery in the Oval Office seems tame by comparison, but it should never be condoned. The arguments will always be made that Monica Lewinsky pursued the President with singleminded determination, or that John Kennedy had countless affairs while President (one of them allegedly with a teenaged intern three years younger than twenty-two-year-old Lewinsky) , or that Franklin Roosevelt had several mistresses, or that Warren G. Harding fathered Nan Britton's child when she was twenty-one, but I can never excuse Clinton's abuse of power. By the time he became the Commander-in-Chief, the media's collusion in covering up the President's private life had long since passed, but he still thought he was above the rules as well as the law. I can only imagine the internet and network fallout if President Obama indulged in the same hanky panky while discharging his duties as the most powerful man on earth. Yet Bill Clinton is rich, famous, and celebrated while Monica Lewinsky will be a punchline for the rest of her life and still cannot get even a low level job in the private sector at the age of thirty-eight. She will be forty-years-old in two years' time. Most employers will not hire anyone over the age of forty-five. Granted, she has money squirreled away, but it cannot last forever. Bill Clinton is worth upwards of one hundred million dollars. He should give some of it to Monica. His dalliance with her ruined her life. After the scandal broke, she stood up for him for twelve hours with Ken Starr's prosecutors but he fed her to the wolves. Not once did he have a decent thing to say about her. Like everyone else, she was expected to fall on a sword for him. I'm so glad that she kept that blue dress. It turned the tables on him and he was forced to come clean on national television much to his shame but not chagrin. He never felt any remorse and she did. How ironic that Hillary Clinton was able to use the scandal as a springboard to the Senate. Too bad that the Lewinsky drama robbed Al Gore of much-needed votes for his 2000 Presidential bid, and ultimately did Hillary in as well when she made an aim for the Presidency herself. Too many political commentators were aghast when she wanted to run for the highest office in 2008 because it would have in effect given her husband an illegal third term. And Barack Obama was a better choice. Both he and his wife have demonstrated that they have a stronger moral compass than either Bill or Hillary Clinton. Even Ted Kennedy (ruled unfit for the Oval Office after the tragedy at Chappaquiddick in 1969) felt compelled to back Obama. This book by Bill Bennett is more than enough proof that corruption in high places casts a dark shadow over any nation and a terrific reminder that the leader of the free world needs to be as, John Adams so wished, an honest and wise man. The American people deserve nothing less.

Highly recommended for students of history and lovers of democracy, and by far Bill Bennett's best book.