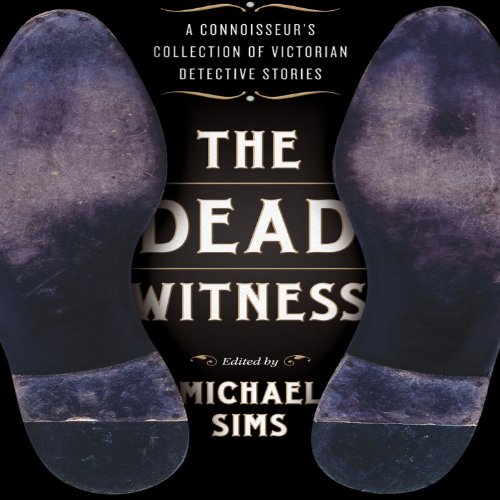 By: Michael Sims
Narrated by: Dee Macaluso
Try for $0.00

The Dead Witness gathers the finest adventures among private and police detectives from the 19th century and into the early 20th - including a wide range of overlooked gems creating the finest ever anthology of Victorian detective stories. "The Dead Witness", the 1866 title story by Australian writer Mary Fortune, is the first known detective story by a woman, a suspenseful clue-strewn manhunt in the Outback. This forgotten treasure sets the tone for the whole anthology - surprises from every direction, including more female detectives and authors than you can find in any other anthology of its kind.

Pioneer women writers such as Anna Katharine Green, Mary E. Wilkins, and C. L. Pirkis will take you from rural America to bustling London. Female detectives range from Loveday Brooke to Dorcas Dene and Madelyn Mack. In other stories, you will meet November Joe, the Canadian half-Native backwoods detective who stars in "The Crime at Big Tree Portage" and demonstrates that Sherlockian attention to detail works as well in the woods as in the city. Holmes himself is here, too, of course - not in another reprint of an already well-known story, but in the first two chapters of A Study in Scarlet, the first Holmes case, in which the great man meets and dazzles Watson.

Authors range the gamut from luminaries such as Charles Dickens to the forgotten author who helped inspire Edgar Allan Poe’s "The Murders in the Rue Morgue", the first real detective story. Bret Harte is here and so is E. W. Hornung, creator of master thief Raffles. Naturally Wilkie Collins couldn’t be left behind.

Michael Sims’s new collection unfolds the fascinating and entertaining youth of what would mature into the most popular genre of the 20th century.

What listeners say about The Dead Witness

This could have been a great book. But I'll never know. The narration was horrible and may made it even worse same narrator for 20+hrs. Very disappointed. Story selection was quite good but felt like I was listening to a LONG boring monotone lecture.

Acceptable, as a Collection!

Where does The Dead Witness rank among all the audiobooks you’ve listened to so far?

I can't rank it, as the question asks, "among ALL the audiobooks". I've been listening to "audio" books for over 30+ years. Started with Books-On-Tape and went on, from there! :)

"The Book", no. The "Collection of Stories", yes, only in part. As with all collections, be they books, family photos, or the Buffet table, the "Edge of your seat" is extraneous. Individual stories however, deserve a "Yes"!

Have you listened to any of Dee Macaluso’s other performances before? How does this one compare?

Not that I recall.

I enjoyed the variety of stories. Many stores and more authors were new to me. I enjoy Victorian detective stories of many types. It was interesting to hear stories when detective stories were few and new. They are especially enjoyable because they are written by what were the current writers living in that time. Many modern authors tend to add some modern when writing this type of novel. I did have to work on suspending my knowledge of modern forensics and detection. I needed to do this to really enjoy these stories. Dee Macaluso's reading of most stories was excellent. I did have trouble when she imitated extreme accents and dialects. I had to do mental translations into Mid West USA. This meant pauses and listen over areas. My main complaint was that the introduction was long. I felt there should have been a little less time on the staples of Doyle, Poe and the like. A little more time should have been on the rarer authors.

Poor reading, diction and substitutes Country for County. Sadly Reads with no feeling or inflection.

Good collection of stories ruined by the narrator

An interesting set of detective stories, but this audio version is ruined by the narrator. Appalling attempts at french people speaking English, which reminds one of 'allo allo', consistent mispronunciation of names, both of people and places, and purported London accents, which are even worse than Dick Van Dyke in Mary Poppins. Why narrators have to attempt these accents is beyond me. If the stories had been read in the narrator's own natural accent, it would have been far preferable.