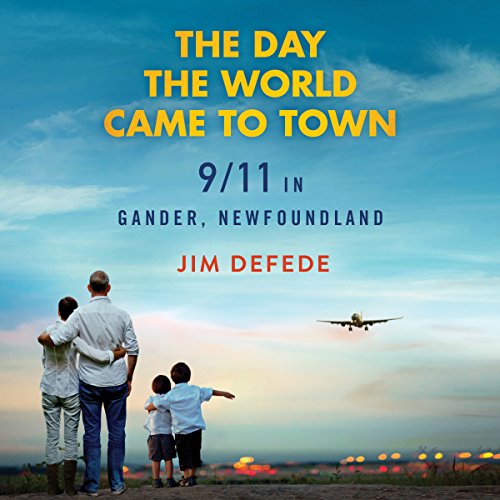 The Day the World Came to Town

Perfect for fans of the musical Come From Away!

When 38 jetliners bound for the United States were forced to land at Gander International Airport in Canada by the closing of U.S. airspace on September 11, the population of this small town on Newfoundland Island swelled from 10,300 to nearly 17,000. The citizens of Gander met the stranded passengers with an overwhelming display of friendship and goodwill. As the passengers stepped from the airplanes, exhausted, hungry and distraught after being held on board for nearly 24 hours while security checked all of the baggage, they were greeted with a feast prepared by the townspeople. Local bus drivers who had been on strike came off the picket lines to transport the passengers to the various shelters set up in local schools and churches. Linens and toiletries were bought and donated. A middle school provided showers, as well as access to computers, email, and televisions, allowing the passengers to stay in touch with family and follow the news.

Featured Article: In the Oral Histories of 9/11, Grief, Hope, and Heroism Find a Voice


Memories passed down through storytelling have been a vital part of culture since the dawn of civilization, and we've all had moments of pained reminiscence: Where were you on that day? There are few accounts more powerful than audio recollections of the lived histories of 9/11—their words, their voices, their stories all ensure we will never forget, that the passage of time will never erode the memory of those loved, lost, and left behind.

What listeners say about The Day the World Came to Town

👍👍 From one of the Plane People

Hi,
I was on Continental 23. I lived through this. Hearing what was going on in the other planes and with the other passengers was remarkable. I shed many a tear while listening to this book. I only wish I would have been able to contribute to the book. It was so nice living this experience again through this book. I plan to go back to Appleton this summer to visit and donate some more money.

On the darkest of days shines a bright light.

Thank you, people of Gander, for bringing the best of humanity to the people stranded in your towns on 9/11.

Even this many years after 9/11/01, listening to this book brought back all of the memories of that terrible day. And while I had heard of the events in Gander, listening to the specifics - the logistics of landing all of those airplanes, housing and feeding thousands of people, giving ear to the pain and prayer for the lost - what an amazing people.

If you need a bit of encouragement, listen to The Day the World Came to Town.

Read all of my reviews at bit.ly/PageBedtime

When the terrorists attacked the United States on September 11, 2001, there were many air crafts headed for the U.S. Understandably, President George W. Bush closed air space and threatened to shoot anyone down attempting to fly in the U.S. As a result, many travelers were stranded all over the world. And hundreds of them ended up in the small town of Gander, Newfoundland in Canada. The Day the World Came to Town by Jim Defede is the non-fiction account of how the citizens, affectionately referred to as Newfies, cared for not only Americans, but people from all over the world during those tenuous three days after the attacks.

It was nice listening to this audiobook so many years after the attacks. I write this because we are far enough removed from them to be able to reminisce without all of the emotion from the events of the day as well as the aftermath. That is not to say this book was not emotional. It was touching. It made me smile. It made me tear up. It made me think. Our neighbors to the north took care of us, without reservation. And no matter what the 2018 Administration thinks, the people from Canada are our strong allies.

Throughout the book, we learn about many different people: a couple who was bringing their newly adopted daughter from abroad, a mother who was on her way home but very stressed to learn that her son, a firefighter, had last been seen entering one of the Twin Towers, and an executive from the Hugo Boss company. In this audiobook version, I also listened to the stories of people who were not only new to Gander but their culture was as well. An orthodox Jew and a Nigerian princess were among the passengers who took refuge in this town. What was so amazing to me about this true story is that no matter the differences, the town came together and built on what united them - humanity - and in the midst of extreme tragedy, they took care of these people like extended family members. Because we are in such contentious political times in the United States today, it was nice to listen to this book and be reminded that people do care for one another and we are stronger together.

Recommendation: I absolutely enjoyed this perspective of such a horrific time in U.S. history. I think everyone can benefit from reading this book. Fair warning, grab a box of tissues before you do!

Regardless of whether I purchase a book, borrow a book, or am gifted one, my ultimate goal is to be honest, fair, and constructive. I hope you've found this review helpful.

Read all of my reviews at bit.ly/PageBedtime

This book is a very good reminder of the good still left in the world in the mist of dark times. I made me cry in some parts. It reminded me of the historic day of 9/11 and the emotions is had build inside me as I watch things play out live on TV. We as the world are a community and we often for get it.

Proof of kindness in an often harsh world

For fans of the musical Come From Away, this book is an excellent companion. There's enough of the musical story here to please, with enough extra material to keep it from feeling repetitive. The two are not exact replicas! It's fascinating to learn about all the logistics at play on that horrific day, and heartwarming to see yet another example of the capacity for human kindness that exists when tragedy strikes -- and the amazing community of kind people in Newfoundland in general. The narration is absolutely stellar. Ray Porter reads as if he's relaying his own personal story, with a richness of tone and expression unmatched by most general (as opposed to celebrity) narrators, in my opinion. This is a must listen!

Expected more from this book

The events described are of course uplifting and moving. It’s just that the writing feels rote and uninspired, a collection of disjointed and tiny anecdotes that became quickly repetitive, and I lost the desire to continue reading. No one comes to life on these pages. Considering the emotionality of the situation, the book itself feels dry. The narrator, who sounded rather like Tom Hanks to me, was somewhat expressive, but limited by the dry nature of the writing. I see I’m in the small minority here in being disappointed by the book, but I will be returning this unfinished.

I started reading this because of the musical, Come From Away and I must say that this is fascinating! Everyone needs to hear this history, it's so unknown for such kindness. Proof that we can see the best of humanity even when it's showing it's worst.

A wonderful story recounting a horrific time in our history and the compassion that is within all of us.

Repetitive and Boring, way too drawn out

I bought this book because I had heard a lot of good reviews of the musical that's based on this book, however, the book is not interesting at all
The book is a list of events, people and their distress and relationship to 9/11
It's also really drawn out, and it could have been made a lot shorter and that might have made it more interesting
Half way through the book, I got bored and lost interest
I got tired of listening to how many times people called their loved ones in NYC, or how some people were not moving from the shelter cause they were waiting for news from their son or daughter
What was interesting at the beginning, became repetitive and boring half way through the book

The Aloha Spirit Did Well in Canada

This is a great story of extraordinary human kindness in the most trying and stressful time in history nearly 20 years ago.. The people of Gander Newfoundland displayed what we in Hawaii call the "Aloha Spirit" in going way beyond the stranded airline passengers expectations with all of the help they offered. The author wrote a heart warming tale. Narration was well done. Highly recommended if you want a story showing how great we can all be toward each other.

Great true story of human spirit in a tragic week. Restores your faith in human nature.

interesting piece of history idk about told with style and humour of a difficult subject. only issue was the very many obvious edits in narration, sometimes 2 or 3 sessions in one paragraph... minor gripe

loved it, an emotional rollercoaster. left me wanting to find out more about Gander Newfoundland.

Absolutely loved this book. It is very well written and read.

I would recommend this book to anyone.

A book for your soul

If you’ve seen or heard about the musical “Come from Away” then this is a must!

I suspect acts of terrorism, are possibly motivated by a powerful world leadership marginalising the disadvantaged.

I like being a Westerner and "On The Winning Team" . Yet have concern at what cost ! Does anyone ever "win" when others are so ignored,judged and destroyed.

Revenge and retribution have infinite patience when one glances through history....

Mastering Ego replacing the "Clowns and Circus masquerading as Governance" with....
Compassion, care understanding and healthy respectful boundaries whether at home or on a State-Country to Country....as the people in this town displayed to total strangers.
That I propose, is the type of World leadership we need to demand and get.

Must visit the town to soak up such practical humbleness.

An interesting series of events which happened as result of 9/11. It was quite a remarkable logistical exercise to get it all rolling efficiently with virtually no warning.
A down side to the book was trying to turn the passengers into 'individual stories'. That part was stretched, clichéd and even irritating at times. If the townsfolk were trying to hug strangers or distract them as often as suggested, it would have been unreal. I feel confident that they actually just did a fantastic job of welcoming and caring for the equivelant of a "town-full" of folk from all over the world.