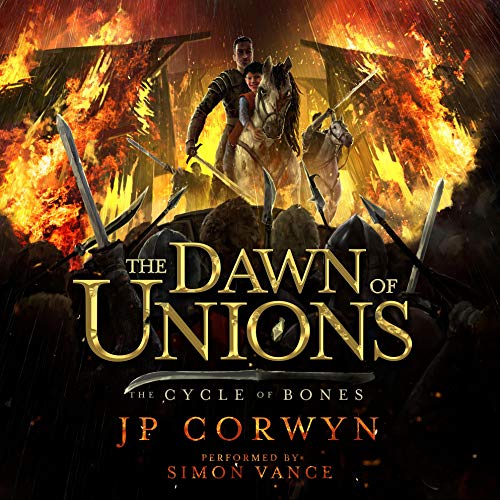 The Dawn of Unions

Every avalanche begins with a single small stone.

At sunset on their first day in Westsong; the local forester witnesses a crow fall. It drops like a stone, and for no apparent reason. He and his boy move to investigate. They are the first to go missing.

Before long, both highborn and lowly begin to meet the same fate.

Nerves begin to frey. Courage and faith begin to unravel, and the truth starts to unfold. An ancient horror moves to isolate Westsong and raze it to the ground.

Against all advice, stand or fall; the Countess decides that she, her personal armsmen, and the remaining fighting men of her escort will stay to help defend the little lives of the ordinary folk that call Westsong home.

Then again; there are no such things as little lives, are there? Nobody is ever really as simple as they seem. Nobody is just “the farmer", or “the forester”, are they?

Smiths, grooms, soldiers, and squires must survive desertion, despair, and death if they are to save themselves, let alone anyone else.

In Thorion County, there’s only ever really one constant.

“When the Falx finally comes for you; no one can help you. The best you can hope for is to make your life, make your death mean something.”

What listeners say about The Dawn of Unions

Looking at the story for what it is, a first glance into a presumably huge world waiting in Corwyns head, it does an amazing job at introducing characters and concepts in a small scale event, all the while hinting at the aforementioned larger world around these characters. The descriptions are very well done and not too lavish that they would take you out of the immersion, and while it is obviously still fantasy, it's also harshly realistic, without being so just for the sake of it. All in all, a very good start for a fresh author and world.

A gripping story that sets the stage for a series!

The Dawn of Unions by JP Corwyn is our first foray into the living, breathing world that he has created and it does not fail to enrapt us as the story unfolds. Throughout the story, the sense of dread and desperation begin to build, culminating in a grim confrontation with a nightmarish enemy.

While this seems to be just the initial step into a much larger story, you can't help but feel a sense of attachment to the characters fighting for survival in this little corner of the world. This is only enhanced by Simon Vance's masterful narration, fleshing out every character and compelling you to will them to succeed, burn with ire at their dishonorable actions, or feel pity for their regrettable circumstances.

If you enjoy Fantasy, you simply must acquire this story!

just finished. the characters he builds have depth and his writing is poetic when it needs to be.
It's one of those books where you find yourself asking, "Why?" while you are reading it. I couldn't predict where it was going and the reason for certain character behaviors...and then it dawns upon you. I need know what or who is causing the "problem". That's why I'm looking forward to book 2

I read the book first which was really good but the narrated version is even better. If you are into this genre you will most certainly enjoy this story.

Outstanding debut Novella by JP Corwyn. The world JP has brought to life is teaming with well... life. Though he introduces many characters, none of them fall flat, all of them are alive and written with individual character history mind. Though we only see a small corner of the world JP has built it's obvious that there is much more going on than just the bubble through which we can see his characters. The attention to detail in combat is comfortable, not overly specific or overly drawn out . And the choice of narrator is absolutely perfect. I eagerly await the full length novels that follow!

As soon as it was done, I listened again!

Kafe runs things for the Countess . He is not only a loyal servant to her, but the head of her Arm guards as well as an old and dear friend. Everything is going great. As the Countess arrives in West Song For the annual harvest festival. Everyone is in a great mood and they can feel the excitement in the air that is until sir Reginalds son comes Tearing through the village screaming like a man out of control. After guards call them down and investigate the tragedy that caused him to lose All decorum. they find out they may be up against an enemy but non-they’ve ever seen before. This is when the story Gets even better. They tell the Countess For our own safety she should go back home. She refuses and said she will stay with her people. in this story there will be unexpected heroes and very unexpected enemies or rather monsters. This is not like a wizard book and although they have paranormal end it do not let that stop you from reading this book. That is not my favorite genre and I read this book twice in a row it was that good. I highly recommend this book… So much! There is Willy riding and what makes this all the great is that he really writes in the way that let you feel would it would be like waiting for a monster to attack and yet is feeling like a normal day I hope I explained that right he is such a great author he really put you in the mindset of the likable characters he has in the book. It is written with wit and intelligence great action and a great ending not to mention the narrator Simon did so good when he did the evil monsters voice I almost got up and turn the light on LOL! he was great at doing all the voices even the Countess . So do yourself a favor and get this book it is so so good! of

Great start to what i hope are many more to come.

Loved the story and Simon Vance's delivery was spot on. I would recommend this to anyone that enjoys medieval fantasy. I will say it is easy to miss things as there is a lot going on but it does not detract from the story.

The story slowly unfolds and becomes more gripping and in depth. I got the audible book version to listen to while I worked from home during the corvid-19 pandemic but quickly found myself glued to the story and voice acting and not doing much work. The audio book is short at 4 and a half hours and I wouldn't hesitate to purchase further instalments if there were more in this line of books

Early steps into a new world

This novella seems to act as an enticing glimpse into what promises to be an interesting new fantasy world. Well written by the author and well narrated by Simon Vance, I’m looking forward to diving deeper into this series and learning more about the characters and their stories when the first novel is released.

A chilling story with much character!

The Dawn of Unions written by JP corwyn is an exciting debut novella from a promising new author.

The book is written with such detail and passion about a new and quite intriguing world with colourful characters and lore, reminding me of other famous works. The book's language is colourful and complex enough to describe moments properly, while not being too overbearing on the reader, and with the excellent performance from Simon Vance, gives the book character on another level, The high detailed and effort put into Simon's performance gives the characters life and chilling story even more love, dread and suspense.

It's a definite recommend, and a must read for anyone who loves proper fantasy medieval fiction!

A world ripe for expansion

Pragmatism, coming of age, and how conflict shapes a community.

Gradual escalation that never lets up in an thought-out and authentic world with believable fights, and believable consequences. Excited to see where it goes next!