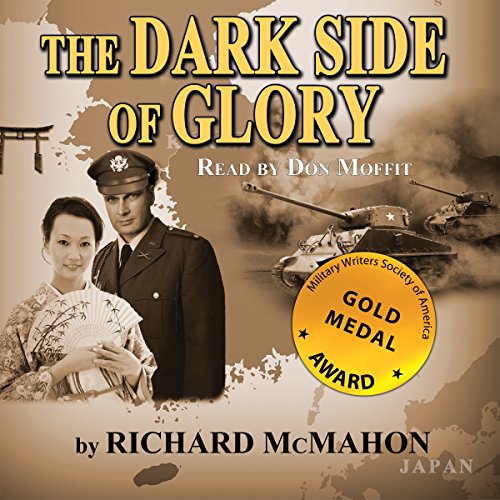 The Dark Side of Glory

By: Richard McMahon
Narrated by: Don Moffit
Try for $0.00

In this suspense novel set during the Korean War, Matthew Clark, the biographer of a respected and highly decorated army general, learns that there is a hidden side to his life, involving a brutal, covered-up murder, a secret mistress, and an abandoned illegitimate daughter. As he delves deeper, Matthew discovers an intriguing mystery and a tragic love in a world of surprises where nothing is at it seems.

Tracing the general's earlier career during the occupation of Japan and through the early days of the Korean War, Matthew follows the lives of four principle characters: Philip Coursen, who appears to be the perfect army officer but with a disturbing dark side; Miriam Coursen, equally perfect army wife who may hide a secret agenda; Calvin Carter, an idealistic young West Pointer, beset with guilt as a result of his clandestine affair with another officer's wife; and Samantha Winstead, the beautiful, vivacious cause of Calvin Carter's discomfort. The biography takes a personal turn for Matthew as he finds himself drawn into the story when he falls in love with the young woman who claims to be Coursen's daughter.

"This is a marvelously well told story. The plot is different and exciting. The characters are described vividly to the extent I felt a loss when any of them died. A murder is committed at the beginning but it is a wild ride before the killer is exposed. And among all this are the Korean War and a tragic love story." ( Readalot Reviews) "An excellent book, written by an author who obviously knows what he is talking about. Brings to life what is known in Britain as the 'Forgotten War.' The plot and the characters are well developed and make you want to know their stories. The military aspects are brilliantly presented, certainly on a par with other authors such as Coyle or Bond." ( Peter Nicholas Farrell Reviews)

What listeners say about The Dark Side of Glory