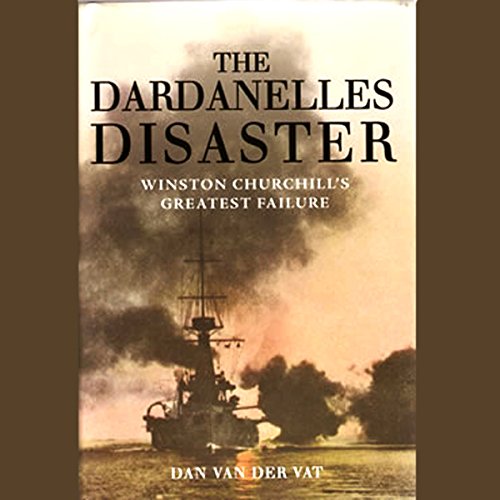 Here is the riveting account of young Churchill's greatest - and almost career-ending - defeat.

The British Navy's disastrous attempt to pass through the Dardanelles to Constantinople was a turning point in the history of World War I. Acclaimed naval military expert Dan van der Vat argues that the disaster at the Dardanelles prolonged the war by two years, led to the Russian Revolution, forced Britain to the brink of starvation, and contributed to the destabilization of the Middle East.

With a narrative rich in human drama, The Dardanelles Disaster highlights all the diplomatic clashes from Whitehall to the Hellespont, Berlin to Constantinople, and St. Petersburg to the Bosporus. Van der Vat analyzes Churchill's response to the obstacles he faced and describes the fateful actions of the Turkish, German, and British governments.

With never-before published information on Colonel Geehl's minelaying operation, which won the battle for the Germans, The Dardanelles Disaster is essential listening for everyone interested in great naval history, Churchill's early career, and World War I. The repercussions of that battle are felt more strongly than ever today.

"General readers will find enlightening this extended demonstration of the contributions command can make to catastrophe." (Publishers Weekly)

True History of the Battle - A good book.

One needs to look beyond the prior reviews when thinking about this book. It provides a rich, detailed history of the battle and gives the entire context of the period in which the battle takes place. The work is not for the faint of heart, however. The author examines a complicated period of history, a period that is much more complicated than most moder readers are aware. However, the listner is well rewarded for sticking with it. If you just want a blow-by-blow of the battle, pick another book. If you want to know the motivations and the mistakes of the leaders involved as well as the complicated interrelationships that shaped and drove the events of the time, then this book should not be missed.

Winston: I Don't Love You Any More

As hard as I tried I could not remember the name of every Cabinet Minister, Lord, Baron, et al plus every battleship and minelayer involved in this fiasco.

Churchill will lose a notch or two on your admiration scale after you read about the long term consequences of his overly daring, ill-conceived, disastrous plan.

Churchill has been credited with coining the phrase An Iron Curtain has descended across Europe after WW II ended. Churchills campaign as Lord of the Admiralty during WW I contributed significantly to the rise of Communism as the Russians had to cede massive amounts of land to Germany for peace, giving the Red army a free hand to destroy the White army allowing communism to thrive.

If you do get this book DO NOT miss the epilogue, it is an eye opener.

0 of 5 people found this review helpful