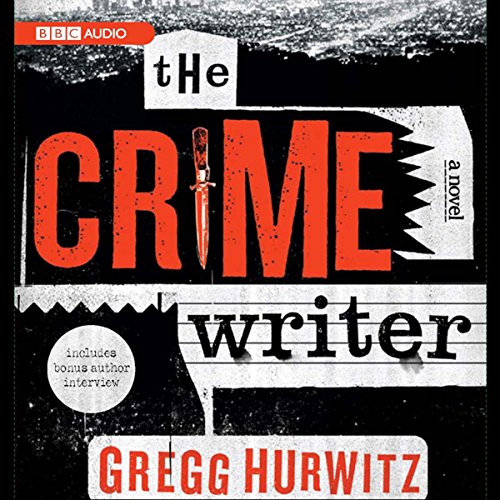 By: Gregg Hurwitz
Narrated by: Scott Brick
Try for $0.00

Drew Danner, a crime novelist with a house off L.A.'s storied Mulholland Drive, awakens in a hospital bed with a scar on his head and no memory of being found convulsing over his ex-fiancee's body the previous night. He was discovered holding a knife, her blood beneath his nails. He himself doesn't know whether he's guilty or innocent.

To reconstruct the story, the writer must now become the protagonist, searching the corridors of his life and the city he loves. Soon Drew closes in on clues he may or may not have left for himself. And as another young woman is similarly murdered, he has to ask difficult questions - not of others but of himself.

What listeners say about The Crime Writer

The classic mystery has traditionally been the domain of intellectuals to which Gregg Hurowitz certainly belongs. He has not only met the mystery challenge with verve but has included humor in the well placed yet self effacing remarks of his protagonist.

Drew, the writer, experiences a series of "life as is hoped for" setbacks. From a small cadre of friends, he acts on their advice and encouragement to overcome life's obstacles by using his own talents to prove his innocence.

As Drew forges his own investigation, he becomes a Big Brother to a 14 year old delinquent, gains the trust of a brutalized psychologist, accepts protection from the Rottweiler/Doberman, Xena, Princess Warrior, gets street wisdom from a baseball pro, and discovers treachery in one of his trusted friends.

All in all, Gregg Hurwitz is the author who does not judge the human condition but describes it sincerely. His protagonist, Drew, defies a defeatist attitude and pursues justice using his own talents and the knowledge of his friends.

The mystery is my favorite of literary styles. To have humor cleverly inserted into the prose is especially enjoyable.

This Tale of Amnesia is Quite Forgettable

Imagine yourself held for hours on end for a crime you didn't commit. When you're finally exonerated, instead of releasing you, the cops throw you in with a hundred violent criminals who begin to beat the living daylights out of you. Then the cops come in, let you go, warn you to stay away from their investigation. What do you do then?

Me, I'd run home and curl up in a corner until I stopped shaking. Or run to my wife, GF, BF and say, HS! You won't believe what just happened! Or maybe go to the doctor to get my injuries checked out. But in this book, Drew Danner, the title character, doesn't even think about it, doesn't tend to his wounds, doesn't seem to feel pain. He just goes immediately back to messing with the case. So how does a reader suspend his disbelief when things like that make it impossible to suspend your disbelief?

Imagine that all happens after Drew wakes up from an operation to remove a brain tumor with amnesia, goes on trial for killing his ex-fiancee, is found guilty, but is released because the tumor caused temporary insanity. And is then implicated in an identical murder. Was he framed? Not even Drew knows for sure. A lot of other non-believable stuff happens beyond all that. Cliche upon reality-defying cliche. How is any of this remotely possible IRL?

And some of it is not even relevant to plot or character. At one point, there is a long comic set piece followed by two long morbid ruminations on loneliness and mortality. These are only marginally and tangentially relevant to either the plot or character development. This is almost amateurish in its construction, despite being written by a veteran best seller.

There seemed to be something interesting developing at one point. The writing and the narration (a better than usual Scott Brick) was progressing from the blank slate Drew Danner began with, due to amnesia, toward an actual personality. Nice work, I thought -- until his personality started bouncing all over the place like Ricochet Rabbit. It wasn't forethought, it was accidental, until it veered unpredictably, seemingly at random.

Then there are the ultimate reveals. A big one and a secondary one. No. No way. No way, ever, ever. The only thing that could have made this worthwhile was the reveal. No. Off the charts non-believable. Not possible. Not even interesting. The beauty of a good reveal is the deadly simplicity of the truth. Going this far over the top is the exact opposite of that.

What made the experience of listening to The Crime Writer the most enjoyable?

Great characters and I love how Gregg writes women. I didn't want this book to end and I couldn;t put it down. It's fast paced and packed with emotion and nail-biting action! This is one of my favorites of Gregg.

I stayed up way too late reading this book, I just couldn't put it down from start to finish.

Which character – as performed by Scott Brick – was your favorite?

I practically read this all in one sitting! Thanks you Gregg and Scott, you make my daily train commute painless.

This book is depressing even for a crime thriller, the main character just went thud for me despite Scott Brick (and I usually like Brick a lot) and his OVER-narration; he just goes way too far here, it is performance art gone crazy. Unless you love the writer, and even if you do, THINK TWICE.

Get to the story already!

I knew I was in trouble when the entire drive home (45 minutes) was spent in an over-wrought description of LA. Yikes. Scott Brick is not the right narrator for this book. There is drama in every single word.
The description reads great, the book doesn't.

King of the simile

Another example of a good idea that wasn't. Hurwitz's story has some interesting twists and turns, and in the hands of a better writer, this one could have been great. I would have loved to have seen what Michael Connelly or Stephen Cannell could have done with it. It shocks me that at the conclusion of the reading, an interview with the author revealed that he had been an essayist before starting a new career in fiction. One would think that an accomplished essayist would not have had to put a simile in every single sentence (or maybe it just seemed that way). After a while, it was nauseating and totally detracted from the story. Memo to writers: WRITE THE STORY AND STOP TRYING SO HARD! A great tale will flow, on its own, and doesn't need verbage describing a bruise over the protagonist's eye as "sprouting broken blood vessels like the hairs on Medusa's head". Ugh. To borrow from Hurwitz's style: like a child oversated on dime-store chocolate who finds he no longer wants his dinner, I won't be going back for more.

i found this book to be a difficult read. i thought the narration was tedious and the story very implausible and boring. would not recommend.

Gregg Hurwitz is such a gifted writer! I have read or in most cases listened to all of commercially available works. Every character he creates is so good and interesting to say the least. This book, a real departure from his other stuff, was phenomenal! I tend to get the audiobook versions and Scott Brick is equally as talented as a narrator. He ALWAYS brings Gregg’s characters to life, they are an incredible team! This ranks up there as one of my most favorite and funny Hurwitz novels. I HIGHLY recommend anything written by this man, even a damn post it note! 👍😁

Intriguing but failed to meet expectations

Initially the story was intriguing and I was excited to see where it was going, but then as we got more into the main character I got annoyed with him. His constant overly romancing of descriptions as well as continuing to make stupid moves and then barely paying for them. I believe I've heard the narrator before and I believe I enjoyed his previous work - but here I think my opinion was tainted by my annoyance of the main character (sorry Hurwitz). I'm sure most people will enjoy it, I'm just difficult to please and feel like sharing it as my hand goes numb from holding my phone while I write this. Does anyone really go through these? I don't think they do, and so for the random person who does and has continued to read this all the way through I say "Watch out!!! There is a monster at the end of this book" the undocumented autobiography of Grover was delightful and also totally made up...

I haven't listened to a bad one yet!!!

Would you listen to The Crime Writer again? Why?

Yes. It is a great listen. All of Hurwitz's books are.

What other book might you compare The Crime Writer to and why?

Presumed Innocent by Scott Turow. The prosecutor is blamed for a murder of an ex lover.

Yes and Scott Brick's performances are great in all the books I have listened to. Great in this one also.

The chief of the morgue's situation.

Please keep writing more books. I usually read books in series because to me they seem to always be more interesting. But Greg Hurwitz's books are not series but they are GREAT AND VERY, VERY INTERESTING!! I highly recommend them!