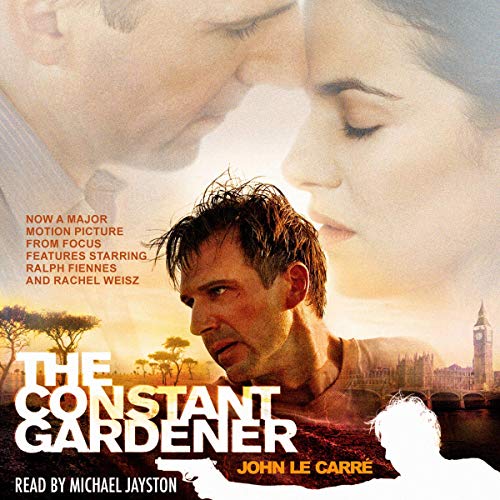 Frightening, heartbreaking, and exquisitely calibrated, this John le Carré's novel opens with the gruesome murder of the young and beautiful Tessa Quayle near northern Kenya's Lake Turkana, the birthplace of mankind. Her putative African lover and traveling companion, a doctor with one of the aid agencies, has vanished from the scene of the crime. Tessa's much older husband, Justin, a career diplomat at the British High Commission in Nairobi, sets out on a personal odyssey in pursuit of the killers and their motive.

A master chronicler of the deceptions and betrayals of ordinary people caught in political conflict, le Carré portrays, in The Constant Gardener, the dark side of unbridled capitalism. His 18th novel is also the profoundly moving story of a man whom tragedy elevates. Justin Quayle, amateur gardener and ineffectual bureaucrat, seemingly oblivious to his wife's cause, discovers his own resources and the extraordinary courage of the woman he barely had time to love.

The Constant Gardener is a magnificent exploration of the new world order by one of the most compelling and elegant storytellers of our time.

What listeners say about The Constant Gardener

I have been a little reluctant to read le Carré's post-Cold War, post-Smiley novels. Part of my reluctance was borne of some false assumption that le Carré's masterpieces were mostly weighted towards the front end of his brilliant career. The Constant Gardner blew all my assumptions up. It is amazing how le Carré can write such a masterful novel and such a popular book. Many of the MFA literary novels published during the last thirty years will quickly slump and dissolve into the dust of mediocrity, but I am certain this novel (along with many of le Carré's earlier novels: the Perfect Spy, the Karla Trilogy, the Spy Who Came in From the Cold, the Russia House) WILL be read in three hundred+ years.

Le Carré is amazing. He doesn't fall into the easy path. Yes, Big Pharma is bad, but not in some monolithic/caricatured way. It doesn't just do evil, but does many things that are good. This is le Carré's style. There is infinite shading that he does with EVERYTHING. Each character is shaded, and mirrors each other character. Some characters are flipped, some are mirrored, some are distortions, but each character is complicated, nuanced and difficult to view from one position. Le Carré writes with an artistry that makes it impossible to not love the good, despite their faults, and still appreciate the human-like frailties of the bad.

A good friend of mine calls this novel the greatest love story of the last fifty years. I find that claim difficult to dispute. It isn't a traditional love story, and not exactly a happy love story, but it is an amazing story of loyalty, love and understanding that leaves the reader both tired and sated.

If one day I discovered I could write a novel that was just 1/2 as good as 'The Constant Gardner', I would think I had been blessed with a masterpiece.

5-star in every way.

This isn't a book I would have picked up on my own. I saw a review by Darwin8u - a great person to follow - and loved what he had to say about it. I thought I'd give it a shot - and was rewarded with a book that completely exceeded my expectations.

This is one of the most beautifully written books I've landed on in quite some time. (Beautifully narrated, too.) The complexity of the writing is luscious with characters that are very real and very flawed. It is impossible to put down yet you don't want it to be over. I cannot imagine better use of a credit.

Although it’s hard to complain with le Carre, I’ve had enough of Smiley/Cold War Europe, and his two books exploring post-colonial Africa (this and Mission Song) showcase the breadth of his talent and provide a great change of pace. Here, the mystery involves corporate greed, pharmaceuticals and developing world public health and is all-too believable. I did tire of having the narration driven by insipid English diplomatic types, but heavy doses of irony made it mostly amusing, and by indirection expressed the moral outrage of the author.

The Constant Gardener (2001) by John le Carre begins as an appalling murder mystery, develops into a harrowing investigation of big pharmaceutical companies and their seemingly humanitarian but actually pernicious activities in third world countries like Africa (aided and abetted by similarly superficially altruistic but fundamentally greedy countries and people), and ends up a contemporary Heart of Darkness complete with its own Kurtz figure. Throughout all that, the novel explores marital and other kinds of love and the question of whether it's "Better to be inside the system fighting it than outside the system, howling at it." And this politically and socially engaged, literate mystery and espionage novel is set in a vividly realized Africa, "heat ripping off the city pavements."

The story begins when the British High Commission in Nairobi is informed of the death of Tessa Quayle, a beautiful twenty-five year old lawyer married to Justin Quayle, a gentlemanly, unambitious diplomat in the Foreign Service stationed there. Tessa and her African driver have been found brutally murdered near Lake Turkana, while the handsome black Belgian aid worker Dr. Arnold Bluhm, who'd been accompanying Tessa on some unknown mission (and with whom she'd shared a hotel room the night before), has gone missing. Soon enough the media is portraying Tessa as an unstable interracial nymphomaniac and Arnold as a vengeful lover, impressions that the powers that be in the Foreign Service are subtly fostering. Enter two young police agents sent from Scotland Yard to investigate the murders. As they question Sandy Woodrow (the Head of Chancery in the Nairobi High Commission) and Justin, we realize that there is more to Tessa's death than some love triangle gone bad. As the novel progresses, Justin researches Tessa's "mission" until it becomes his own and, questioning his pre-loss persona as detached gardening aficionado and constant spouse, he is retracing her steps like a thinking man's middle-aged, non-violent James Bond into the heart of darkness that lies in the pharmaceutical industry, Africa, and humanity, all the while coming to love his dead wife more and more.

The novel does not paint the western "pharmagiants" as completely evil entities and Africans as completely innocent victims. As one character puts it, the "pharmaceutical industry has achieved human and social miracles, but its collective conscience is not developed." le Carre doesn't ignore local corruption, brutality, ignorance, intolerance, and civil war. But indeed much of the responsibility for those evils does, in his depiction, stem from the profit driven interference of western companies, countries, and even organizations like the UN and WHO, that, despite the best efforts of some people who genuinely want to help the Third World, too often end up botching and exacerbating complex and problematic situations. Lest readers think le Carre is exaggerating for dramatic effect, he says in his Author's Note (not included in the audiobook), "As my journey through the pharmaceutical jungle progressed, I came to realize that, by comparison with the reality, my story was as tame as a holiday postcard."

le Carre is quite good at getting in the heads of middle-aged men, like Justin, to be sure, but also like his foil, Sandy Woodrow, who is also a diplomat but one whose raison d'etre is to keep a steady boat so he can be promoted up through the Foreign Service until he can become a Sir. Sandy fantasizes divorcing his wife and marrying attractive female subordinates and can't understand why they treat like sexual harassment his "natural" comments and contacts. He is a conflicted man subject to waves of nausea at the glib, obedient lies he finds himself telling his staff, wondering self-pityingly, "Who did this to me?" "Who made me what I am? England? My father? My schools? My pathetic, terrified mother? Or seventeen years of lying for my country?"

The reader Michael Jayston reads clearly and passionately with his rich and warm voice, so that the feelings of le Carre's characters are perfectly pitched. He is adept at doing English spoken by Africans, British (upper crust and working class), Italians, Germans, and so on, and his women sound like real people rather than like a man trying to sound female.

Just one part of the novel disappointed me, and to explain it requires a SPOILER (so if you haven't read the novel, do not read this paragraph). I think that le Carre unfairly and nearly perversely raises the reader's hopes at a couple points towards the end when a complaining villain and a persuasive spy say things that seem to indicate that justice will be done.

There are no easy answers in The Constant Gardener. The "God profit" is seemingly almighty, with the few un-tainted people tending to be vulnerable and limited in the amount of change they can force in the multinational corporations and compliant governments running the world. The novel is not, however, a total downer. It is sometimes quite funny. It makes you want to make Tessa and Justin's mission your own. It is suspenseful, sad, angry, illuminating, beautiful, and terrible, with just enough hope.

Interesting construction. As angles of vision shift, perspectives move from shadow to sunlight, plot points are subtly illuminated, characters are slowly revealed. What a rich treasure.

This story took a while to become likable, but it worth persisting. I almost put it down after the first few chapters. Reasonably well researched for facts and with a building storyline that becomes excellent as it goes along. The reader is superb.

I found this book extremely wordy. I would listen for hours and there would be zero plot advancement. I did enjoy the reader, but his pronunciation of pharma kept me puzzled. (why would a farmer be shipping drugs? oh, yeah, pharma). I found the range of volume levels annoying. I had to constantly turn up the volume to hear whispers over road noise only to get my ears blasted by the next sentence. I stuck it out until the end with the hope that it would be worth it, but regret it.

Excellent Michael Jayston reading as always although he struggles with some accents - NZ in particular.

Le Carre at his brilliant best but spoilt a bit for me with the rather silly conspiracist - but dramatically useful - element of having Tessa murdered by the drug company. This is just silly and unrealistic to me and it's the kind of over baked element that spoils a lot of his later work. Dubious ethics and business practises, yes, assassination with UK government collusion, no. Le Carre is Le Carre though so he's streets ahead of practically everyone else and worth trading for the sheer pleasure of his genius.

Story line was excellent, well narrated most enjoyable? I could close eyes - and visualize the characters as I recall from the movie.