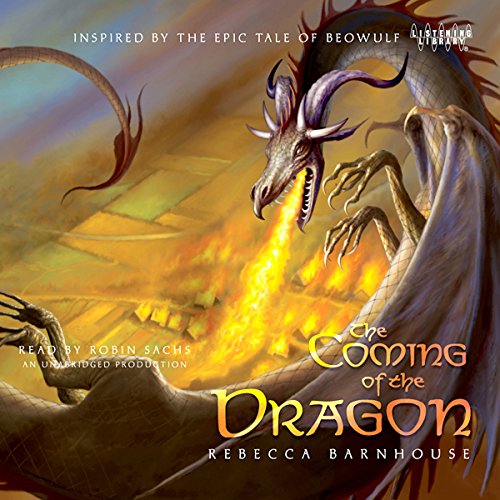 The Coming of the Dragon

By: Rebecca Barnhouse
Narrated by: Robin Sachs
Try for $0.00

Rebecca Barnhouse weaves Norse gods, blood feuds, and a terrifying dragon into this spectacular retelling of the end of the Old English poem Beowulf.

When he was a baby, Rune washed up onshore in a boat, along with a sword and a pendant bearing the runes that gave him his nickname. Some people thought he was a sacrifice to the gods and wanted to send him right back to the sea. Luckily for Rune, King Beowulf disagreed. He lifted the boy from the boat and gave him to Amma, a wisewoman living on a farm far removed from the king’s hall, to raise as she saw fit.

Sixteen years later, Rune spends his summers laboring on the farm. And at King Beowulf’s request, he comes to the hall each winter for weapons training. But somehow he never quite fits in. Many people still fear he will bring a curse on the kingdom. Then a terrible thing happens. On a lonely crag on a mountain that belongs to the giants, someone awakens a dragon. It is time for Rune to find the warrior inside himself and prove to the doubters once and for all that he is a true hero.

What listeners say about The Coming of the Dragon

The writing is ok. The storyline is interesting. I understand from the explanation at the end of the book how this book was a challenge to the author. However, the writing style is just sad and depressing. I stopped this book several times just keep myself from falling into a depressed state.

Is it worth a credit, maybe. If you like the literary curiosity that the author created, you might enjoy the academic aspect to the book. If you are looking for an interesting story, probably not.