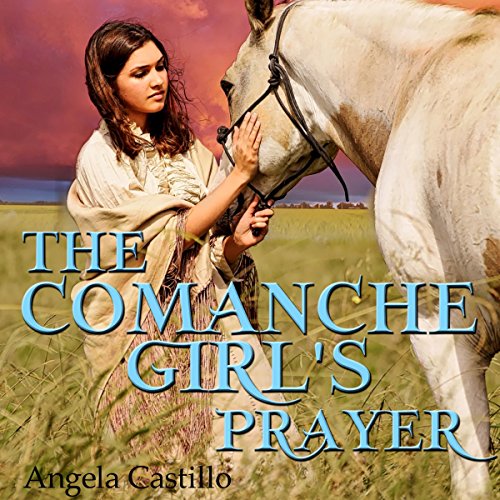 By: Angela Castillo
Narrated by: J. Grace Pennington
Try for $0.00

It's 1890. Called by God, 19-year-old Soonie Eckhart travels to an illegal Comanche and Kiowa settlement in North Texas to become a teacher for the children in hiding.

Despite her Comanche roots, she finds many in the group, including a volatile young man named Lone Warrior, refuse to accept her.

After a chance encounter in the hills with a band of dangerous men, Soonie must draw on the deepest parts of her faith and courage to survive.

What listeners say about The Comanche Girl's Prayer

Lovely Story of Heritage and Faith

This is definitely a good one for those of us that enjoy clean historical inspirational romances with good narration. Although I wish I would have read the first book in this series before this one, I didn't need to as it is a complete story. This is a wonderful story of culture, family, romance and Christian faith. It is respectful of the American Indian heritage while showing diversity of cultures and beliefs. My only complaint is that it was too short. I wanted to know more, especially in the epilogue. But I shouldn't complain because it had an HEA.....I just wanted more details. 💓

I would like to thank the author, narrator, or publisher for providing me this audiobook at no cost in exchange for my unbiased review courtesy of Audio book boom.

Summary:
Soonie Eckhart goes to live with her mother’s people to be a local teacher. She falls in love with them but finds dangers in the woods.

Additional Comments:
• The love story angle was about as subtle as an elephant in New York City.
• The singing threw me because I play audiobooks fast.
• The danger seemed realistic, but I wish there was more fighting.
• The narrator did okay.
• The Christian aspects of the book aren’t even remotely subtle.
• If you’re used to the genre, not much will stand out about this story. Typical brave girl out of her element finds the love of her life once God takes the surly soul and flips his attitude on its head.
• Side characters: I liked Darla. Molly seemed superfluous. The uncle is a decent sort of chap. The bad guys were suitably evil.
• I did end up yelling at the MC to get it together at least once.

Conclusion:
It’s book 2 in a series, but I think it’s fine as a standalone book.
*I got the book on a free code site. I understand I do not have a set-in-stone obligation to share my thoughts, but have freely chosen to do so anyway.

This is a good book to listen to. It has a good storyline. It's written and narrated well

Soonie is one quarter Comanche and feels a spiritual tug at her heart to go and teach their children. There she learns so much more of the people she has come from. She makes so many connections to the people and falls in love with one special man.
This story is a stand alone but has references to the first story in the series which do not detract from the story itself. The author has done a great job of making the story realistic and the narrator keeps her audience engaged in the plot.
This is a short book, but very entertaining and anyone who loves a clean Christian story will enjoy this series.

I have really been enjoying this series. The characters are well developed and the plots are already interesting.

Another well told story. Suzanna is Zelly’s (from book 1) best friend and new sister in law. This story is about Miss Sue’s time with her a Mother’s people as a school teacher. Angela walks you through the daily life of the Comanche people as a small group hide away from the reservation. The details and descriptions make you feel like your inside the book!
Grace brings the book to life as she does a marvelous job portraying each character!
God’s ways are not our ways, but He has more for us than we could have dreamed!

Another great book by Angela Castillo!

I enjoyed the reading of this book. It was interesting and kept me listening! I am looking forward to listening to more of her books.

The year of 1890 a strong faith to go to Texas to teach children in hiding. She is only nineteen, what an undertaking. Given audio was good for my voluntary review and my honest opinion

Rites of passage account of a young girl's heart.

A gentle story wonderfully told by Suni, 1/2 Comanche, 1/2 White, as she grapples to find her destiny.

Insights into the story of Comanche reservations and those who fought to be free. Young teacher learns about her heritage.