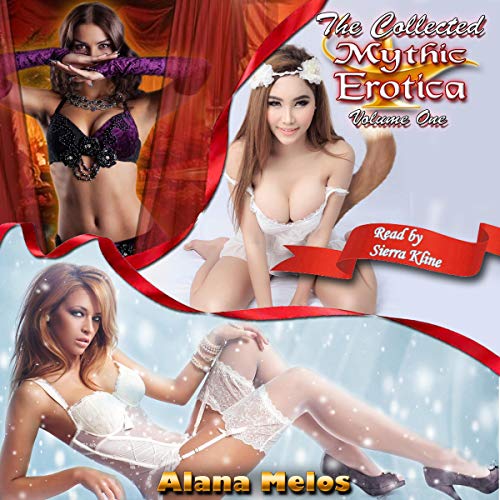 The Collected Mythic Erotica, Volume One

By: Alana Melos
Narrated by: Sierra Kline
Try for $0.00

When the sultan finds his wife in the arms of another man, he executes her, beginning a brutal domination of the virgin women in his kingdom. Only beautiful, wanton, and wise Scheherazade knows how to stop his wicked ways...by turning the tables on him and dominating the sultan.

"The Coming of the Snow Queen"

In a modern-day fantasy land, Kai and Gerta are sweethearts who are very much in love. When Kai is infected with a devilish malady and can only see the worst in people, he breaks up with Gerta and throws himself into the arms of the sensuous, sultry snow queen. Gerta goes on a quest of sexual awakening, learning about desire and ecstasy as she searches for her one true love. Will her quest end in rapturous happiness, or will Kai refuse her for the cold, lust-filled embrace of the snow queen?

What listeners say about The Collected Mythic Erotica, Volume One

good for what it is

This was pretty good for what it is. It is definitely firmly in the erotica category, but it is varied and quite engaging sexual fairy tales. The narration is well done too.

I absolutely love this author's erotica stories! I like that you get a mixture of stories in this book. The narration was great. It will keep you entertained. This author did a great job with the characters. This was not my first book by this author and I can't wait to read more of her books! I was given this free review copy audiobook at my request and have voluntarily left this review.

No Myth its just great erotica

I was gifted this audio book free of cost on the understanding that I offer my unbiased & honest opinion of this book . I have been an avid listener to everything Alana Melos has written & had made into an audio book . My preferred genre in books is erotica & Alana Melos is definitely one author I always await on producing new books . I loved that is covers so many interaction, everything from bisexuality, lesbian, BDSM, 3somes and of course lots of M/f action . This collection of erotica even delves into Asian fairy tales , needless to say I really enjoyed this book . It would be remiss of me if I didn't state how wonderful the narration was . Sierra Kline has narrated many books & she has a wonderful gift of drawing a listener in & keeping then in .

Great variety, lots of sex, good narration. I was provided a free copy of this book and am leaving an honest, unbiased review. This is one that I'll listen to more than once, for sure!

Awesome stories lots of great sex keep up the great work I look forward to more.This audiobook was given to me for free at my request from the publisher or author and I provided this voluntary review.

From beginning to end, the stories are well written and as hot as can be. The stories draw you right in, and are well plotted. The narration by Sierra Kline is absolutely perfect. She has one of the most sensuous voices I can imagine for these stories, it is simply a joy to listen to. I don't see how you could go wrong selecting this audio book.

I was given a complimentary audible credit in exchange for my honest review of this collection. An honest review is just what I've given you. This is a wonderful collection, superbly narrated.

Definitely worth a listen! or read. I'll be listening through the first part again sometime soon.

Totally fun take on a classic. Just wow. Just wow. You won't ever want to stop listening.
“I was given this free review copy audiobook at my request and have voluntarily left this review.”