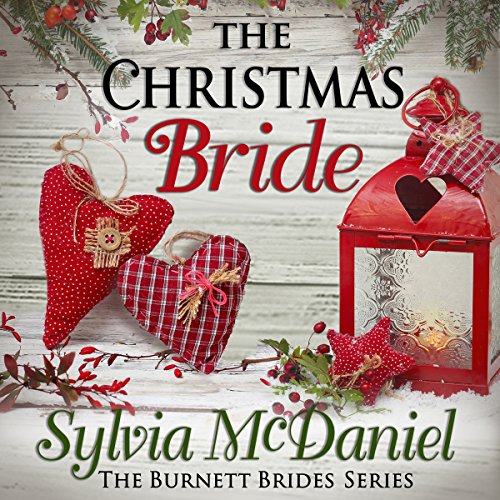 By: Sylvia McDaniel
Narrated by: Lia Frederick
Try for $0.00

In the historical western town of Fort Worth, Texas, matchmaking mother Eugenia Burnett has achieved her goals. Her three sons are happily married, and she has three grandchildren, with the fourth on the way. But she hasn't given up her matchmaking ways. Now she's introducing lonely widows and widowers. Until one widower, rancher Wyatt Jones, lets her know he's only interested in one woman: her. Sworn never to remarry, Eugenia doesn't want a husband. But Wyatt wants Eugenia and he's one determined cowboy. Come celebrate a western Christmas with the Burnett family and watch Mama Burnett meet her match.

What listeners say about The Christmas Bride

A fun and entertaining western romance

This was my favorite of the Burnett Brides series. It is just the right length with a nice amount of spice. My only complaint is that the narrator makes Eugenia sound like she's 70 years old. The story line would also be more reasonable if Eugenia was almost 60 rather than almost 50. 50 isn't as old as the author describes. But all in all- a fun story.

I usually do not read or listen to historical romance stories, but when given the opportunity , I thought I would give this story a try.
I really enjoyed it. Though it’s part of a series, it’s a stand alone . What I enjoyed most was the fact that the main characters are in their forties.
Eugenia is a mother of three married boys, with families of their own. Her deceased husband was a tad dictatorial and now that she is by herself , she is enjoying her freedom to do and say what she pleases. She is also known as the town’s matchmaker.
Wyatt is a widower whose wife was a friend of Eugenia’s. Though they never acknowledge it, there was a spark between these two. Wyatt is determined to court and marry Eugenia , while she is adamant to staying single. As far as she is concern , she doesn’t need or want a man.
It was fun to see these two interact. Things didn’t go smoothly for Wyatt. Will they get a chance of a second chance at marriage and love, or will the stubborn Eugenia get her way?
A well developed plot with complex characters that will entertain you.
My only but was that in the audiobook, though Eugenia is in her 40s, her voice sounded like the voice of a woman in her 70s.
I was gifted an audiobook of this story. The opinions expressed are solely my own.

Why ruin a perfectly good book with the totally unnecessary sex in the cabin. Sorry, but that ruined the book for me.

all Sylvia McDaniel book are a great read
you will not me disappointed
a must read!

I was gifted an audio book copy in exchange for my honest review.

Honestly, I jumped into the book without knowing much of the synopsis, nor being aware of that this was the fourth book in a series. So it was quite surprising to find out that it was now the turn of the woman who played matchmaker in the previous books to meet her match, if she wanted or not.

Eugenia is one suborn woman. She has been married before and while her marriage was good, it was not perfect, and she intends to never marry again. This is why she needs to put an end to Wyatt’s advances towards her – and fast! Almost every woman in the right age is sent his way with her best casserole to woo him and win him over, so that he finally forgets about Eugenia.
Only Wyatt can be quite determined himself, and Eugenia has to realize that she underestimated him when he bluntly tells her that he wants no other woman besides her. He wants her as she is: The stubborn and (often willing) funny woman that she is. Although being turned down countless of times, he never gives up, because he knows what he wants.

Although not overly descriptive, there was one in my opinion beautiful love scene between those two – it was quite a surprise to me that Eugenia let it happen at that exact point. I also loved for once to read a romance about a woman in her forties / fifties finding her true love.

The narration was beautiful, although it took me a while to get used to Eugenia’s voice (all the others I liked instantly), because it seemed to make her older than she was, but once I did it suddenly matched her persona quite well.

This surely is one sweet and funny Christmas novella that really warmed my heart.