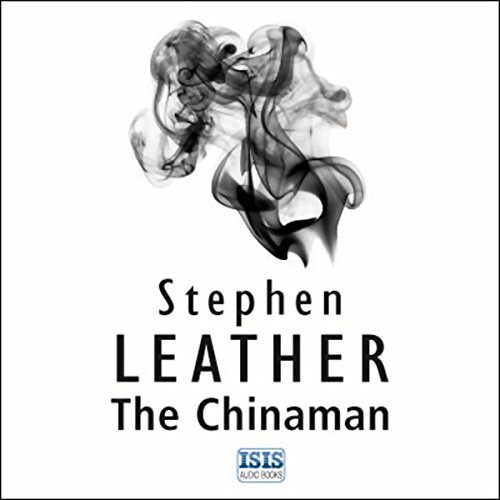 By: Stephen Leather
Narrated by: Russell Boulter
Try for $0.00

Jungle-skilled, silent, and lethal, he had killed for the Viet Cong and then for the Americans. He had watched helpless as his two eldest daughters were raped and killed by Thai pirates. Now, all that was behind him. Quiet, hard-working, and unassuming, he was building up his South London take-away business - until the day his wife and youngest daughter were murdered by an IRA bomb. Then he began to ask the authorities who were the men responsible, what was being done - and was turned away, fobbed off, treated as a nuisance. That was when the Chinaman, denied justice, decided on revenge...and went back to war.

" The Chinaman is a gem of a thriller, perfectly constructed and full of the unexpected." ( Library Journal)

What listeners say about The Chinaman

Turning loose a trained Vietnamese assassin among a bunch of IRA bombers is an idea loaded with possibilities. It's a great little book, but the author falls into the trap of Orientalism in his characterization of the Viet Cong hero: he makes him into a single-minded cutthroat with the tracking skills of Natty Bumppo. He could have been a Joyce fan, or a horse racing bettor, or a baseball or lacrosse fan. But no. He does know how to make nitroglycerin out of antifreeze and fertilizer and set it off with a flash bulb. Not too deep. The Irish terrorists get full three dimensional portraits, on the other hand, including cottages, favorite drinks, Land Rovers and girl friends. Still, the plot moves right along and it's a fun read, with plenty of surprises -- all of them for the deliciously astonished white folks, and many of them fatal.

For a novel called the Chinaman, the book doesn't really focus on the Nguyen character enough. Instead it dragged a little too much with the IRA members relationships and inner conflicts. The Nguyen character could have had more depth and development.

The performance was good. His nailed his British Isles accents but his vietnamese accent at times sounded like a generic Asian accent and other times sounded Japanese. He also should learn how to pronounce the name Nguyen (sounds more like ngwen) and other vietnamese words such as "Hue" (pronounced hoo-ay not Hyoo).

It's a different take than what the movie is as its does things completely differently.

Better than the movie, and that's saying something

Very good, only wish I read it instead of hearing it. Good adaptation from book to movie.

Fun/nteresting story with a superior performance.

This audio book is really well done and was great to listen to. I was sorry when it ended.

I can't believe the ending. I am so disappointed in this story after everything that happened

I bought this book after watching the movie. Of course, this is much better. The only thing I didn't like was the main character's accent.

This audiobook had me tuned in nonstop. I wish there was more! A great story with characters that jump off the tracks.

Strong narration and a solid story.

I read this after watching the movie and personally liked the more grim tone of this book.

This was a great story. Lots of real world references that add a level of credibility to the tale. “AUDIBLE 20 REVIEW SWEEPSTAKES ENTRY”

Well I first read the Solitary Man and now went back to this one and found it more gripping. I gave The Solitary Man 5 out of 5 before reading this one and actually found it better. wish audible would allow me to go back to rate this one as 5 and the previous as 4 but actually both deserve 5s! Heartbreaking in parts but stirring in others this book reinforces my thoughts to go through all the stephen leather books on audible.

At last Stephen Leather on audio!

I have read nearly every Stephen Leather book as they have been published and have constantly scoured the net for them on audio.
The Chinaman is in my opinion one of his best and the audio version certainly doesn't disappoint with Russell Boulters narration being a very pleasent surprise. He does it at just the right pace and carries off all the various accents extremely well.
Although a relatively easy listen this story contains enough twists and detail in the characters to keep the interest going.
I look forward to more of his books on audio soon.

I admit to not having heard of this author before, however the Chinaman came up on a recommended list. As I'd accrued a number of credits I thought "I'll give it a whirl" - and wow - am I glad I did. The story had me gripped from beginning to end and the narration was amongst the best I've heard. Am not going to search for some more by Stephen Leather - though you've set a high standard to follow!

A fast-paced, well plotted crime thriller. I have enjoyed many of Stephen Leather's books in print, and this was one of the first Audible downloads I bought. It was well worth it, holding my attention throughout and leaving me wanting more.

Stephen Leather has you once again clinging to your headphones in this, slow to get going, brilliant piece of writing. Once past the 1st couple of chapters there is a roller coaster ride if emotions. He hooks you like a trout, plays with your emotions then swaps to a more sedate section as if playing the trout. I found myself, inadvertently, holding my breath at points. At one point I'd thought I would listen for an hour before sleep but 4 hours later I was still hanging on to his every sentence like a school boy getting his first love letter. A brilliant Audio book, highly recommended listening.

A romp through the 'Troubles' but with a twist

I thoroughly enjoyed this book - a quite different romp through the Irish situation back in the eighties. Well read too by Russell Boulter and, as always, well written by Stephen Leather. I hope there is a sequel.

Having seen the film, which was captivating, unusually for me, I decided to listen to the audio book. while some aspects of the story are a bit different, the book is equally enthralling. I particularly warm to Stephen's ability to build several stories which then intertwine. since watching the film I have enjoyed reading several of his Spider Shepherd novels.

My first Stephen Leather book but I will read more