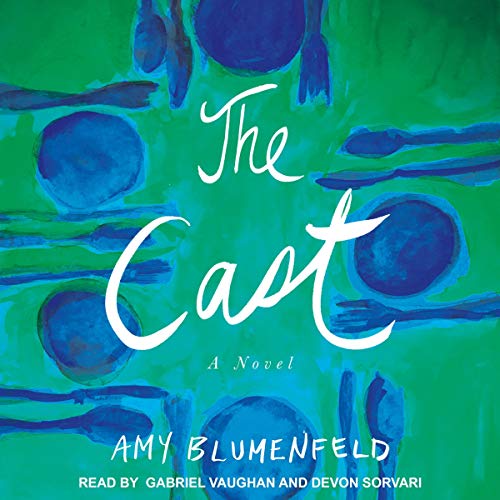 By: Amy Blumenfeld
Narrated by: Devon Sorvari,Gabriel Vaughan
Try for $0.00

Twenty-five years ago, a group of ninth-graders produced a Saturday Night Live-style videotape to cheer up their ailing friend. The show's running time was only 90 minutes, but it had a lasting impact: Becca laughed her way through recovery, and the group - Jordana, Seth, Holly, and Lex - became her supporting cast for life.

On the silver anniversary of Becca Night Live, the friends reunite over the Fourth of July to celebrate Becca's good health - but nothing goes as planned. The happy holiday-card facades everyone's been hiding behind quickly crumble and give way to an unforgettable three days filled with complex moral dilemmas and life-altering choices.

Through humor, drama, and the alternating perspectives of five characters, The Cast explores the power of forgiveness, the importance of authenticity, and the immeasurable value of deep, enduring friendships to buoy us when life plays out differently than expected.

What listeners say about The Cast

This was a total bore for me. Hoping I can still return it. So much detail and inner thoughts and very little plot or action. I've got to go back and read the description to figure out what made me want to purchase this, but it was yawns all the way through. I was sadly happy to hear the audible guy come on at the end. Characters aren't very likable, and there is just very little happening. One of the side characters was the most likable, and the book weirdly veered towards her character at the end, even though the majority of the book was all about another character. Also, all of the characters sound exactly the same - the narrator doesn't try to distinguish between the voices of the female characters at all, so if I wasn't listening carefully, I had to rewind to know which female character was speaking. I can't recommend this one at all.