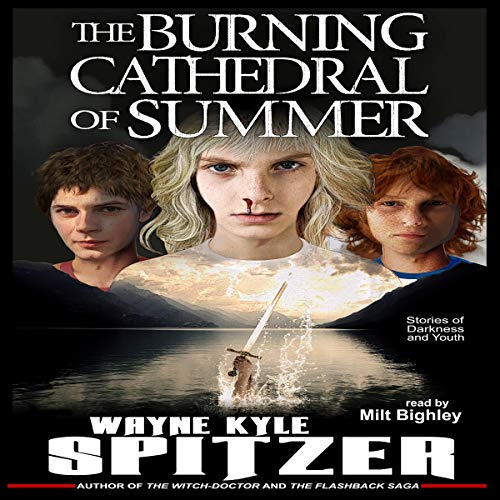 The Burning Cathedral of Summer

By: Wayne Kyle Spitzer
Narrated by: Milt Bighley
Try for $0.00

I wish I could say that when Benson and his gang showed up we drew on some previously unknown strength and kicked their Rich Kid asses; that we chased them all the way back to their fancy cars and tucked and rolled seats and kicked in their doors and fenders; although we really would do that later, not to them personally but to guys like them, in those dog days immediately after high school - when Orley had yet to join the army and I’d yet to lose my mother, and LA was just a twinkle in Kevin’s eye.

Instead they caught us completely by surprise, knocking the tent over and rolling us up in it - like a giant snowball - after which they proceeded to kick and punch us mercilessly before dragging us out by our feet and gloating over us in the sun: like trolls, I remember thinking. Or Tolkien’s fucking orcs.

“Well now, look at this,” said Benson, and paused to hawk up phlegm. “If it isn’t our little faggots - just cozied up like lemmings.” He pursed his lips and spat, causing green slime to splatter my cheek. “Our thievin’ little douche-flutes, just letting their freak flags fly.”

“And sitting on the rest of our gas money,” said Mickelson. “I can guarantee it.”

“Oh?” Benson raised his brow, as if he hadn’t thought of that. “You’re kind of the leader, Orley. Is that true?”

Orley just looked at him, his mouth bleeding, his cheek scuffed and bruised. At last he said, “We used it to pay your mother. She said that’s what triple-penetration costs.”

A couple of them laughed - Mickelson and Spelvin, I think - and Benson shot them a look. At length he said, “Funny - as always.” He paused, cocking his head. “You look thirsty. Buckey. Give me your cup.”

He held out his hand without looking, and Buckey placed in it a large container, one of those 32-ounce super tankards you get at Zip Trip or 7-11, minus its lid. “The stink bugs are terrible this year, as I’m sure you’ve noticed. Buckey here left this out in the sun too long.” He smelled the cup’s contents, wrinkling his nose - then motioned to Spelvin and Mickelson, who snatched Orley up by his arms and held him, even as two others grappled his head and began prying his mouth open. “These will probably tickle a little as they go down. A lot of them are still alive…”

Then he tipped the cup, and its contents poured out onto Orley’s face, into his mouth - the soda spattering his cheeks, the little bugs scrambling helter skelter over his lips - before he chocked once, suddenly, violently, and began chewing, jerking his head free of their hands, smiling like a lunatic.

“Protein!” he exclaimed, and spit something out, a shell, maybe, or a leg. “Thank you, sir! May I have another!”

And then there was a commotion that sent a ripple through their ranks and caused them to stand apart - staring toward the lake, into the sun, where a lone figure stood slight as a wraith, its hair sopping wet, clinging to its face, its skinny arms held straight at its sides.

What listeners say about The Burning Cathedral of Summer