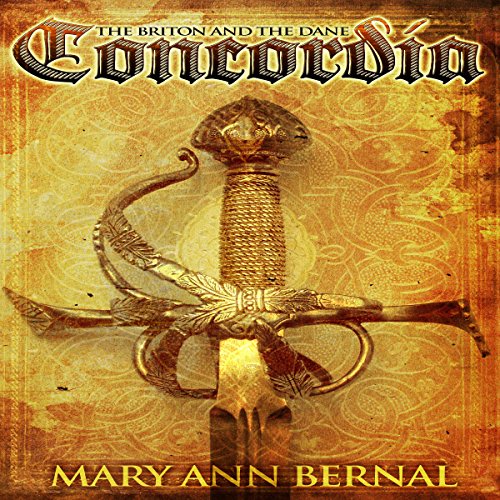 The Briton and the Dane: Concordia

By: Mary Ann Bernal
Narrated by: Sebastian Lockwood
Try for $0.00

Travel back in time to late ninth-century Anglo-Saxon Britain, where Alfred the Great rules with a benevolent hand while the Danish king rules peacefully within the boundaries of the Danelaw. Trade flourishes, and scholars from throughout the civilized world flock to Britannia's shores to study at the King's Court School at Winchester.

Enter Concordia, a beautiful noblewoman whose family is favored by the king. Vain, willful, and admired but ambitious and cunning, Concordia is not willing to accept her fate. She is betrothed to the valiant warrior Brantson but sees herself as far too young to lie in the bedchamber of an older suitor. She wants to see the wonders of the world, embracing everything in it - preferably, but dangerously, at the side of Thayer, the exotic Saracen who charms King Alfred's court and ignites her yearning passions.

Concordia manipulates her besotted husband into taking her to Rome, but her ship is captured by bloodthirsty pirates, and the seafarers protecting her are ruthlessly slain to a man. As she awaits her fate in the Moorish captain's bed, by sheer chance she discovers that salvation is at hand in the gilded court of a Saracen nobleman.

While awaiting rescue, Concordia finds herself at the center of intrigue, plots, blackmail, betrayal, and the vain desires of two egotistical brothers, each willing to die for her favor. Using only feminine cunning, Concordia must defend her honor while plotting her escape as she awaits deliverance somewhere inside steamy, unconquered Muslim Hispania.

What listeners say about The Briton and the Dane: Concordia