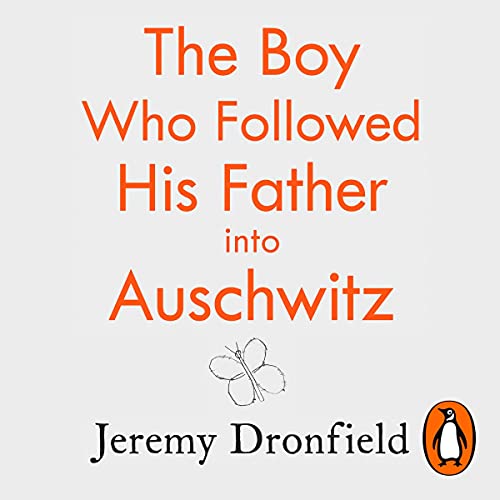 The Boy Who Followed His Father into Auschwitz

By: Jeremy Dronfield
Narrated by: John Sackville
Try for $0.00

Penguin presents the audiobook edition of The Boy Who Followed His Father into Auschwitz by Jeremy Dronfield, read by John Sackville.

In 1939, Gustav Kleinmann, a Jewish upholsterer in Vienna, was seized by the Nazis. Along with his teenage son, Fritz, he was sent to Buchenwald in Germany. There began an unimaginable ordeal that saw the pair beaten, starved and forced to build the very concentration camp they were held in.

When Gustav was set to be transferred to Auschwitz, a certain death sentence, Fritz refused to leave his side. Throughout the horrors they witnessed and the suffering they endured, there was one constant that kept them alive: the love between father and son.

Based on Gustav's secret diary and meticulous archive research, this audiobook tells his and Fritz's story for the first time - a story of courage and survival unparalleled in the history of the Holocaust.


An amazing book, not the usual holocaust style. A true story from the diary of Kleinman with lots of historical facts.

It is unpleasant listening, but equally fascinating as we live in a society withour first world problems.
It’s incredible to think that these atrocities happened less than a hundred years ago. Some of us have relatives who were alive when this piece of history happened.

The essence of the book is the spirit of resilience, bravery and courage that kept these truly amazing individuals going through all of the horrors they suffered.

We must never forget those who survived and those who did not.

May we never be in the situation of a world war due to the hatred of our fellow human beings beliefs.

We do have to ask ourselves why is religion at the heart of most wars. Is it really that important?

The boy who followed his father in to ausch witz

Truely amazing story. Very well written and emotionally read. A story i couldn't put down, it draws you in and you feel their pain,courage and faith in surviving the horrors and being reunited.

I fly out to Poland in 10 days to visit auschwitz, this book was a fitting way to put the suffering off the people there in the forefront of my mind ready for the visit. Nobody should ever forget what the nazis did during ww2.

Loved this book. Sackville is the perfect narrater. remarkable story which outlines the framework of the barbaric nature of Nazi Germany

An excellent account of the horrors of WW11 and the concentration camps. The story was one of hope in amongst the incomprehensible monstrosities that went on during those years to innocent people. This was an honest and researched account of the time and read well by John Sackville.

An amazing recount of a jewish family

The story was gripping. I also learnt a lot about the horrors of concentration camps. It was like a recount with little emotion.

I try to imagine how I'd feel experiencing something like fritz and Gustav. I really can't. This story, along with others about the holocaust, I've read remind me of how lucky I've been to have grown up in semi peace time... A riveting story of the human spirit and its desire to neve give in.

iv not cried so much in a long time

A very complete summary of the greatest evil of humanity. Also of hope and companionship

Moving, terribly sad but shows the courage and strength of the Jewish prisoners. Wonderful book, would highly recommend.

I couldn't stop listening to this book. Very interesting, well written, heart breaking at times, but overall a beautiful account.

An outstanding read/listen! Hard to find a point to stop listening. The whole story is very well written and well researched for its use of dates and events. The narrator is brilliant. It can be very confronting at times but I would highly recommended it.

This story needs to be heard

So heartbreaking and yet also miraculous! What an incredible story, thank you for those who did the research and put all the effort in to getting this told. These facts need to be known so the world can never do this again!

This book has been brilliantly written, written in a way that makes it extremely vivid. It is a powerful and often uncomfortable true story that deserves to be read and remembered.

Didn’t want the book to finish. A powerful story of survival and love Amazing to think of the strength of survival

Absolutely amazing book, highly recommend everyone to “read” this book. Well worth it, such an amazing journey

Set in the context of the relentless, unthinkable inhumanity and evil perpetrated on an extraordinary, industrial scale by the Nazi machine, this is not only an astonishing story of survival, but an account of how humanity, resistance, ingenuity, decency, hope and dignity among otherwise ordinary people can combine to prevail over the murderous indifference of a brutal regime. A poignant and confronting story of extreme hardship and unmitigated cruelty that is ultimately uplifting and inspiring.

This is a story of the sheer horrors of man kind during the second world war. However it is simply captivating to hear the friendship forged the helped keep so many alive. After my recent visit to eastern and central Europe on a high school music tour and visiting the camp of Auschwitz the story is a griping one that echoed through the walls of the camp. During the visit the sheer closeness to where they experienced it but also the distance to how I could never experience and comprehend the pain they went through. It is a simply gripping true story of family, friends and there journey to survival. would highly recommend.

A heart warming story agood storyline..One of strength and determination of survival. plus the evil people can inflicted on other without regard

Narrator is perfect for story

Compelling. Detailed. Immersive. NarrAted perfectly. Tone. Pace. Pronunciation. Story is written beautifully. An exemplary audiobook. You will not be disappointed. I listened to this within 2 days.