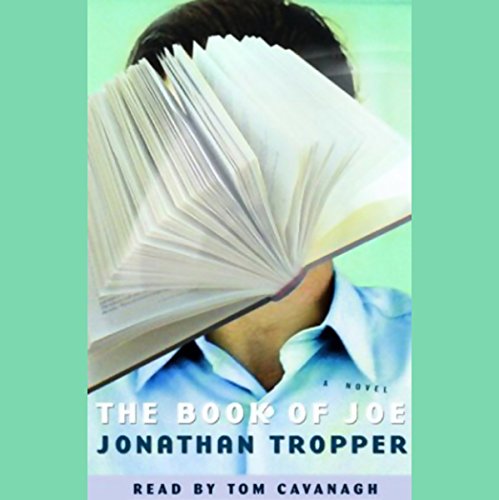 The Book of Joe

By: Jonathan Tropper
Narrated by: Tom Cavanagh
Try for $0.00

In a novel that is at once wickedly funny and achingly poignant, Jonathan Tropper brings us an unforgettable hero: a young writer named Joe Goffman, whose sizzling first novel savaged everyone in his Connecticut hometown, then became a huge hit movie. Of course, Joe never planned on going home again, until now. In The Book of Joe, Tropper takes this irresistible premise and spins it into a hilarious and moving tale of growing up all over again.

Joe's father lies in a coma, and Joe must return to the town he turned his back on seventeen years earlier. So with years of emotional baggage packed into the trunk of his shiny new Mercedes, Bush Fall's most notorious prodigal son is coming home.

Within hours of his arrival, Joe's return ignites a maelstrom of reaction. The basketball coach's wife throws a milkshake in his face. The town book club throws their copies of Joe's book at his house. And a jock-turned-thug threatens to blow up his car, or worse. Everyone's a critic.

But while Bush Falls may not be pleased to see Joe, it's becoming clear that Joe needed to see Bush Falls. As he walks the familiar streets of his hometown, Joe revisits the past he thought he'd purged in his book. After seventeen years of hiding from it, Joe is now ready to face his past, and with the help of some old friends, he could actually learn something...if he manages to survive the homecoming.

"A beautifully crafted book of enormous heart, humility, wit, honesty, and vulnerability. You want to call your friends at 3 a.m. and read whole passages out loud. You want to press it into the hands of strangers. You cannot stop thinking about it because it has rearranged your very molecules. You know that kind of book? This is that kind of book. The Book of Joe is utterly magnificent. I wish I'd written it myself. "(Augusten Burroughs, author of Running with Scissors)
"[Tropper] does it with wit, insight, and a lot of fun cultural references." (Booklist)
"The Book of Joe is an elegiac, wickedly observant look at a small town and its secrets. In Jonathan Tropper's highly readable novel, the problem isn't that you can't go home again, it's that eventually you have to, whether you like it or not." (Tom Perrotta, author of Election and Joe College)

What listeners say about The Book of Joe

I am taken with J Trotter ' writing style, so my opinion is biased toward him - he is dark and funny and real. Loved everything about this book. Wish I would've been a little more warned about the sad shocks in the storyline - wound up crying in the bathroom getting through the last half and scurrying off to be alone to finish it.
So worth the read, if you like full, loving, angry, giving, holistic stories.

Good story and Tom Cavanagh fits the tone and style of the main character perfectly.