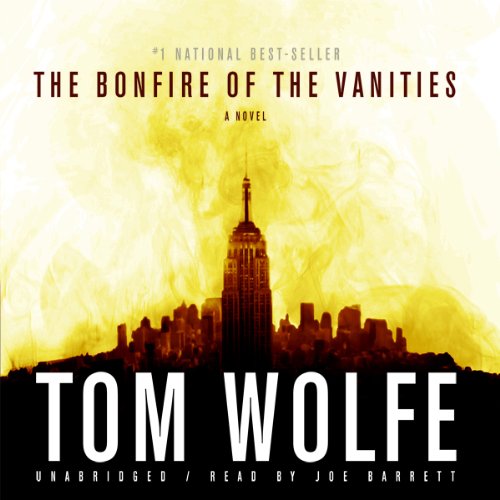 The Bonfire of the Vanities

Tom Wolfe's best-selling modern classic tells the story of Sherman McCoy, an elite Wall Street bond trader who has it all: wealth, power, prestige, a Park Avenue apartment, a beautiful wife, and an even more beautiful mistress - until one wrong turn sends Sherman spiraling downward into a humiliating fall from grace.

A car accident in the Bronx involving Sherman, his girlfriend, and two young lower-class Black men sets a match to the incendiary racial and social tensions of 1980s New York City. Suddenly, Sherman finds himself embroiled in the most brutal, high-profile case of the year, as prosecutors, politicians, the press, the police, the clergy, and assorted hustlers rush in to further their own political and social agendas. With so many egos at stake, the last priority on anyone's mind is truth or justice in this bitingly hilarious American satire.

"A big, bitter, funny, craftily plotted book that grabs you by the lapels and won't let go." ( New York Times Book Review)
"Sheer entertainment against a fabulous background....Often hilarious, and much, much more." ( Kirkus Reviews)
"Erupting from the first line with noise, color, tension and immediacy....brilliant." ( Publishers Weekly)

What listeners say about The Bonfire of the Vanities

THE BONFIRE OF THE VANITIES is perhaps one of the most entertaining audiobooks I have listened to in a long time. The reader, Joe Barrett, does a fantastic job bringing the satirical nature of the story to life and actually enhances what is a very well-written book.

Some may say the story is dated, but I believe it could very well fit into today's world of Wall Street greed, strained race relations, and two-faced politicians.

Tom Wolfe is one of America's best living writers, and this book ranks among his most popular works.

By the way - do NOT see the movie directed by Brian Depalma. It is a piece of garbage that in no way resembles this great work of art. If you HAVE seen the film, listen to this book. It will redeem your opinion of the story.

I can't say enough good about Joe Barrett's reading of Tom Wolfe's excellent book about "Yuppies" and the Bronx of the 80s. The audio book is 27 hours long, but went by so fast I couldn't believe it was that long. Somewhat outdated (someone said this book's view of the Bronx is as outdated as Tom Wolfe's clothes), but still highly recommended.

Three hours in, and I began to realize what a colossal mistake I've been making with audiobooks. I've been giving five stars to lots of books, books I really enjoyed, books that kept me listening way beyond time to quit, well-narrated books, all of them the kind of thing I knew I'd remember for a long time. All those were good books, great books, maybe. But now, what do I do with this book? "Bonfire of the Vanities"? This book -- as written and narrated -- is so far beyond all those other books I've loved, what do I do now? Only five stars are available!

The other thing is, I could easily write a book setting forth all the reasons why this is the best audiobook I've ever listened to -- well, on a par with my other all-time favorite, "Angela's Ashes", which - up until now -- I'd decided was the only other PERFECT audiobook I'd come across. Now there are two.

I won't write a book about it, I won't even say much more, except for one thing: if you've read this far, and decide NOT to buy this book, you're a damn fool. This is the experience of a lifetime, an experience that will draw you in, wrap you up, and then spit you out 27 hours later, exhausted, limp with emotion, and knowing only one thing: you've got to listen to it again.

And as to Joe Barrett, the narrator, there should be a lifetime uber-superior award for his interpretation of this book -- he handled everything with perfection, the gazillions of New York accents, of every possible ethnicity, he slam-dunked the various complicated medical terms, not even Yiddish threw him off his stride. This book is worth it for the narration alone.

Buy it. Download, and click it on. You're gonna be missing the experience of a lifetime if you don't.

This is one book -- and a fine one, indeed -- where the reader makes listening perhaps even richer and more enjoyable than reading. There are a myriad of voices, accents, personalities, and he renders them with brilliant sensitivity. A stunning listen!

I loved the narrator, and the book

I had read this book when it first came out. I have read all of Tom Wolfe's books and this was and is oneof my favorites. I think the narrator did an outstanding job of catching all the New York accents. I highly reccomend this audio book.

One of the best ever!

Read this book when it first came out. Then listened to it many years ago and just listened again. It gets better and better. Brilliant writing and one of the best narrations I've ever heard. Joe Barrett is an outstanding reader. His voices truly enhance a very clever book.

I think Tom Wolfe is a great writer and I was totally enthralled with this audio. The story kept you going the whole time and never seemed to drag. I was also impressed with the narrator and the voices he was able to create. It was a easy listen, I highly recommend it.

A story for the cynical student of human nature

I loved this book. Looking through the other reviews, I see some some people love it and some people hate it.

Some call it racist... And the characters tend to be caricatures of stereotypes. But that furthers the story, and every racial and social economic group is equally portrayed.

Some say the story is slow, and the plot isn't that well developed. The plot isn't what makes this story great. It's the intimate portrayals of the main characters, with their many faults on full display. The way they preen, rationalize, and make themselves the center of the universe in their own minds.

This is a story with no good guys. Read it if you love lavish descriptions of events and places, and if you like unflinching character portrayals.

If you want a rousing quick plot and easily defined good and bad, look elsewhere.

It is always such a treat when a great book is read by a talented narrator. The book is a brilliantly cynical parody of the 80's and Joe Barrett is one of the best narrators I've heard. He vocalizes each character so distinctly that sometimes it's hard to believe it is the same man. One of the best recorded performances I've ever heard and as soon as I finish this review, I'm going to see what else he's narrated and buy them all.

Why didn't I read this sooner? This is a fabulous story. It held my attention like few others.